Zinn and Daniels Both Guilty of Sacrificing Nuance to Politics

Sam Wineburg is a professor in the Graduate School of Education at Stanford and the author of "Historical Thinking and Other Unnatural Acts: Charting the Future of Teaching the Past." This article originally appeared in the Los Angeles Times and is reprinted with the permission of the author. 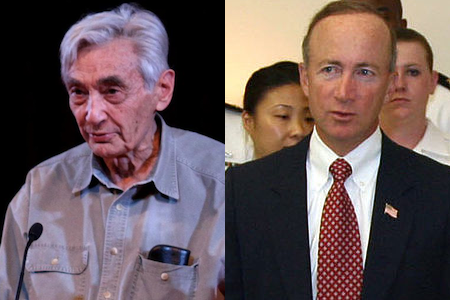 Emails recently obtained by the Associated Press have revealed that Indiana's former Republican governor, Mitch Daniels, now president of Purdue University, tried to ban Howard Zinn's A People's History of the United States from Indiana schools. His attempt, though perhaps clumsy, wasn't all that surprising.

If history tends to be written by the victors, Zinn's alternative take on America's past sought to give voice to the vanquished, telling the story of U.S. history from the perspective of slaves, Indians, laborers and women. The book brought the Boston University historian (who died in 2010) acclaim from many on the American left. But conservatives have had him in their sights for years.

So what did Daniels do specifically? Calling the book "a truly execrable, anti-factual piece of disinformation," he asked his staff in an email to find out if the book was used in Indiana schools. If so, he wanted them to look into how to "get rid of it before more young people are force-fed a totally false version of our history."

What surprised me far more than Daniels' attempt to ban the book was the response of my fellow academics. After the story broke, a group of 92 Purdue faculty members wrote Daniels, warning of threats to the "very legitimacy of academic discourse." Had the letter confined itself to a defense of academic freedom, I would have applauded.

But it didn't. The letter went on to endorse Zinn's scholarship. And in doing so, it took liberties with the facts.

For every negative comment about A People's History of the United States, the faculty letter to Daniels claimed, "you can find a positive one published in expert venues." Really? Of the two leading history journals, neither the American Historical Review nor the Journal of American History saw fit to review the book when it came out. And the work has been criticized by historians from across the political spectrum.

Harvard historian Oscar Handlin, for example, challenged Zinn on numerous points, including Zinn's equating the Puritans' treatment of the Pequot Indians to Cortez's destruction of the Aztecs. Michael Kazin, a Georgetown University historian and editor of the left-leaning quarterly Dissent, noted that Zinn twisted facts in his rendering of American populism. "Pointing out what's wrong with Zinn's passionate tome," wrote Kazin, "is not difficult for anyone with a smattering of knowledge about the American past."

The Purdue faculty claimed in its letter to Daniels that "most experts in the field of U.S. history do not take issue with Howard Zinn's facts, even when they do take issue with his conclusions."

But Zinn got important facts wrong. In successive editions, from the original 1980 imprint to the 2006 "Modern Classics" edition, Zinn quoted a cable supposedly sent by Japanese Foreign Minister Shigenori Togo in 1945 to his ambassador to Moscow. "Unconditional surrender is the only obstacle to peace," the cable was supposed to have said. Zinn concluded from those words that Japan would have been willing to surrender if the U.S. would have agreed that its emperor could remain in place. Yet no cable with these words exists: not in the Japanese archives, the American archives or anywhere else.

The Purdue faculty dismissed criticisms of Zinn's scholarship by Handlin and presidential historian Arthur M. Schlesinger Jr. as coming from the "consensus school of U.S. history." But their dismissal ignored the searing criticisms of historians with impeccable leftist credentials, such as Kazin and Princeton historian Sean Wilentz, who wrote that for Zinn, "everyone who was president was always a stinker and every left-winger was always great."

The letter quotes Columbia University's Eric Foner as saying that Zinn should be "required reading." But Foner wrote those words referring specifically to Zinn's chapter on Vietnam. In the same review, Foner also concluded that Zinn's "history from the bottom up, though necessary as a corrective, is as limited in its own way as history from the top down." Hardly a ringing endorsement.

In a press release defending his actions, Daniels quoted several scholars who had been critical of Zinn in the past. I was one of those cited. It made me uncomfortable to see my words used in that context, and not just because I voted twice for a president whom Daniels refers to as a "smash-mouth" politician.

Daniels, in fact, shares far more with Zinn than he's likely to admit. His view of history, presented in his 2011 book Keeping the Republic, is as one-sided from the right as Zinn's was from the left.

What bothers me most about the whole flap —--about Daniels' emails and about the Purdue faculty's reaction to them -- is the way nuance was sacrificed to politics. We've come to expect politicians under fire to engage in spin. But when academics respond in kind, they reduce education to a game of politics. The loser in this game is truth and the students we are supposed to teach about the value of pursuing it.