The Battle of Gettysburg at 150 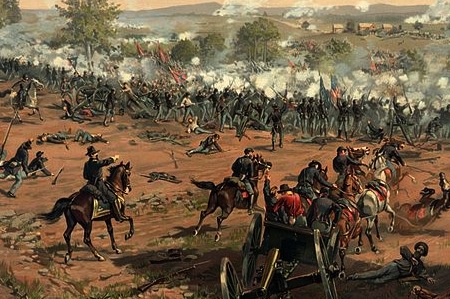 The Battle of Gettysburg marks its 150th anniversary this week (so does the Union victory at the siege of Vicksburg, but good luck seeing anything about that in the media).

To mark the occasion, we've assembled a list of resources -- digital collections, books, and news stories -- about the battle and the Civil War that are worth closer examination.

And of course, please share your favorite Civil War books in the comments! We're pretty well read here at HNN, but considering that the amount of works published on the Civil War easily numbers in the tens of thousands, we certainly haven't read (or even heard of) them all!

Histories of the Civil War Era

Battle Cry of Freedom: The Civil War Era by James M. McPherson (1988). Still the definitive single-volume history of the Civil War. More of a socio-political history than a military history, but absolutely essential reading for to understand the underpinning issues of the Civil War.

Reconstruction: America's Unfinished Revolution, 1863-1877 by Eric Foner (1988). One of the most influential history books written in the past thirty years, Eric Foner transformed historical intepretations of the Civil War and Reconstruction by putting the agency of freed slaves at the center of his analysis.

Glory Road by Bruce Catton (1952). Catton is in many ways the granddaddy of Civil War studies. In fact, if you're of a youthful cast, Catton was the one Civil War author your granddaddy probably read. Civil War studies, and historical scholarship in general, has come a long way since the 1950s, but for pure narrative history and lyrical beauty, Catton is still worth reading.

Gettysburg by Stephen W. Sears (2004). Sears stakes out firm positions in the perennial debates over the Gettysburg campaign (Did Lee make a mistake with the invasion? Was his judgment impaired when ordering Pickett's Charge? etc.), coming firmly down on the side of Lee by examining the larger strategic picture facing the Confederacy in 1863 (the looming loss of Vicksburg most prominently).

Gettysburg: The Last Invasion by Allen C. Guezlo (2013). Allen Guezlo offers the most recent narrative history of the battle, an hour-by-hour, ordinary-soldier's-eye-view of Gettysburg. He relies on postwar memoirs, regimental histories, and survivors' letters to provide a visceral, sensory experience of the fighting.

Last Full Measure: The Life and Death of the First Minnesota Volunteers by Richard Moe (1993). Widely considered to be one of the best regimental histories, former president of the National Trust for Historic Preservation Richard Moe traces in this volume, the history of the Firs Minnesota Volunteers, one of the first Union regiments mustered and which was decimated during the second day of the battle.

Stand Firm Ye Boys From Maine: The 20th Maine and the Gettysburg Campaign by Thomas A. Desjardin. The 20th Maine is famed for its defense of Little Round Top on the second day of the battle. Their ammunition exhausted, regimental commander Col. Joshua Lawrence Chamberlain ordered a bayonet charge into the advancing Confederates. It worked. Little Round Top remained in Union hands for the rest of the battle.

For Cause and Comrades: Why Men Fought in the Civil War by James M. McPherson (1997).

Mothers of Invention: Women of the Slaveholding South in the American Civil War by Drew Faust Gilpin (2004).

Copperheads: The Rise and Fall of Lincoln's Opponents in the North by Jennifer L. Weber (2006).

This Republic of Suffering: Death and the American Civil War by Drew Gilpin Faust (2008).