What are the 10 Most Important Documents in American History?

Announcing the winners in the reader poll "What are the 10 Most Important Documents in American History?" Nearly 800 readers voted -- the most important document in American history is the Marshall Plan!* 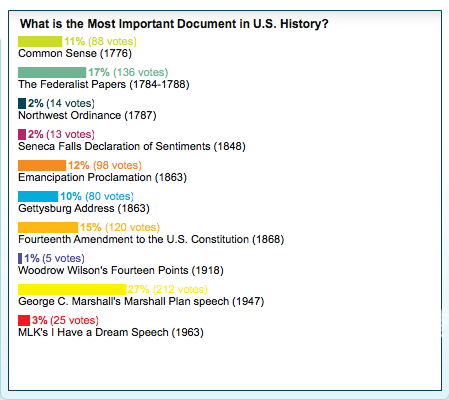 Note: The Constitution, Declaration of Independence, and Bill of Rights were specifically EXCLUDED from the poll, since they'd be in the top three practically by default. We wanted to give other documents a chance!

Nearly a decade ago, the National Archives teamed up with U.S. News and World Report and National History Day for the "People's Vote" project, which asked ordinary citizens to vote on the 100 most important documents in American history from before the American Revolution through 1965.

Nearly 40,000 people participated, casting nearly 300,000 ballots. The top ten documents, according to the voters, were:

With the NARA/History Day/U.S. News list nearly ten years old, with the perennial debate on the U.S. history curriculum in elementary school, high school, and college, and with the recent uptick in interest in Civil War history and the presidency of Abraham Lincoln, it seems to be an appropriate time for historians to revisit the question: What are the 10 most important documents in U.S. history? Do American historians generally agree or disagree with the results of the NARA/History Day/U.S. News poll?

*Admittedly, the Marshall Foundation had been promoting the poll on Facebook.