Have Americans Usually Supported Their Wars? 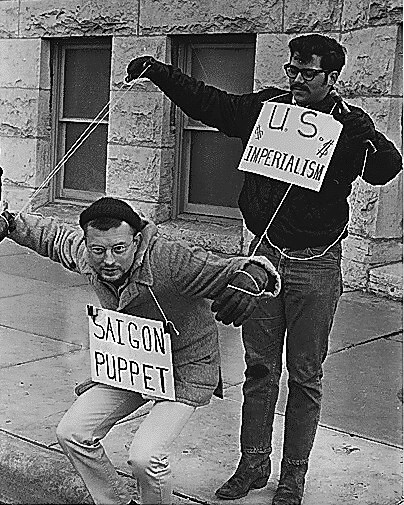 Editor's note January 7, 2020: After recent events in Iraq, many people across the globe are worried that the United States and Iran might go to war. Many attended anti-war protests over the weekend. Here is helpful historical context.

●  Lawrence F. Kaplan: What the Public Will Stomach

It seemed to come as a bit of a shock to the Bush administration that Americans turned against the war in Iraq. Just as administration officials weren't prepared for the fierce resistance that developed to the American occupation of Iraq, neither were they prepared for a change in public opinion at home as the war dragged on. Cindy Sheehan's galvanizing protests outside the president's vacation home caught officials by surprise.

But throughout American history there has always been significant opposition to war. New England states threatened to secede from the union during the War of 1812, which severely hampered the trade carried in New England ships. The Mexican-American War was opposed by leading Whigs including Congressman Abraham Lincoln. During the Civil War President Lincoln faced the opposition of the Copperheads, many of whom he had thrown in jail. The Spanish-American War triggered a robust anti-imperialist movement led by William Jennings Bryan.

In the twentieth century, as Hazel Erskine demonstrated in her widely cited 1970 article, "Was War a Mistake?" (Public Opinion Quarterly), "the American public has never been sold on the validity of any war but World War II." She noted that as of 1969--a year after the Tet Offensive and the brief invasion of the American embassy in Saigon--"in spite of the current anti-war fervor, dissent against Vietnam has not yet reached the peaks of dissatisfaction attained by either World War I or the Korean War."

Reviewing the wars of the 20th century, she noted: "In answer to quite comparable questions, in 1937 64 per cent called World War I a mistake, in 1951 62 per cent considered Korean involvement wrong, whereas in 1969 burgeoning anti-Vietnam dissent nationwide never topped 58 per cent."

Her charts demonstrated the extent of American opposition to war:

Why do we pay for wars both in our country and for buiding up our enimies other countries when its over?
I mean really - if your next door neighbor started a fight with you and hurt you - would you offer to pay for the damages incurred?
I feel that Giving the countries we go to war with money to build their countries back up afterwards is assine to say the least.
Maybe if we quit doing that then the rest of them might think twice before starting on us.

Hopefully this will one day be read before it is archieved... who knows.

A claim that the news media telling Americans about what is going on in their name gives support to the enemy may be vaild. Who knows? Does it give enough aid and comfort to undue everything that has been attempted? I gather it isn't the accuracy of the information, it is the information itself that is the problem?

Based upon a supposition do we deny our first amendment? Restrict our civil liberties? Which ones? For how long? We are in a war on terrorism with no end in sight. Do we limit our freedoms until such time as the administration determies that it is once again safe to tell Americans what our country is doing?

Is Congressman Murtha's speech within the definition of sedition? If the administration comes out 6 months later with basically the same proposition, is it now okay? Approved?

Control of the thoughts of the people is exactly what people opposed to American values wants! Do we "give" or "take away" our rights based upon their perceived influence on others? Is that not now making our rights a privelege to be given and taken as the administration deems in the vital intersts of American security?

What is interesting about the laws passed in WWI is that through history we can see where these laws were not just used to limit speech pertaining to the war, but they were also used to limit a lot of upopular speech. Through the study of history, are we not looking to see how we can do better today?

I don't like to post links because anyone can find something to justify their beliefs... so I just recommend that people do a search on something, like WWI sedition laws. There should be enough on both sides of the argument to allow a person to view them and decide for themsevles.

I will say, placing the blame on the media and attributing the failure of the American Iraqi policy on the dissementation of information is truely a denial of the responsibilites and actions of this administration!

Again, instead of particular links or quotations, I suggest a "fair and balanced" review of information from both sides of the political aisle and then decide for yourself.

I have thought about it... long and hard. I, for one, refuse to cower in fear that my actions, whatever they may be, will be influenced by terrorists! A bully depends on the fear he instills in his victim to manipulate him! I did not serve this country so that the first time things got a little scary we just toss aside all that makes us a nation worth serving.

The U.S. passed laws requiring support for World War I, too. It's too bad no such laws were enacted over the current Iraqi situation. Without defeatism in the media, etc., giving hope to the enemy, it probably would be over by now. I've always felt the time to argue over fighting is before and after the guns are shooting, not while it's going on. If you think about it, that's really the only policy that makes sense.

This is a perfect example why Americans need a better education in history. One that is honest about the turmoil that helped create where we are today. The history as taught before (the good old days?) was designed to try to create an illusion of uniformity. Instead, we need to know that dissent does not weaken a democracy, but stregthens it.

In 1898 William Jennings Bryan and most leading Democrats were war hawks, while President McKinley and many top GOP leaders (like Speaker Reed) were doves.
During the short war there was very little opposition.
--Many Democrats opposed the treaty that ENDED the war because it gave the nation too much responsibility for the welfare of the Philippines.
Richard Jensen