Drugs, Fires and Murder in New York: Welcome to Life on the Street in 1975 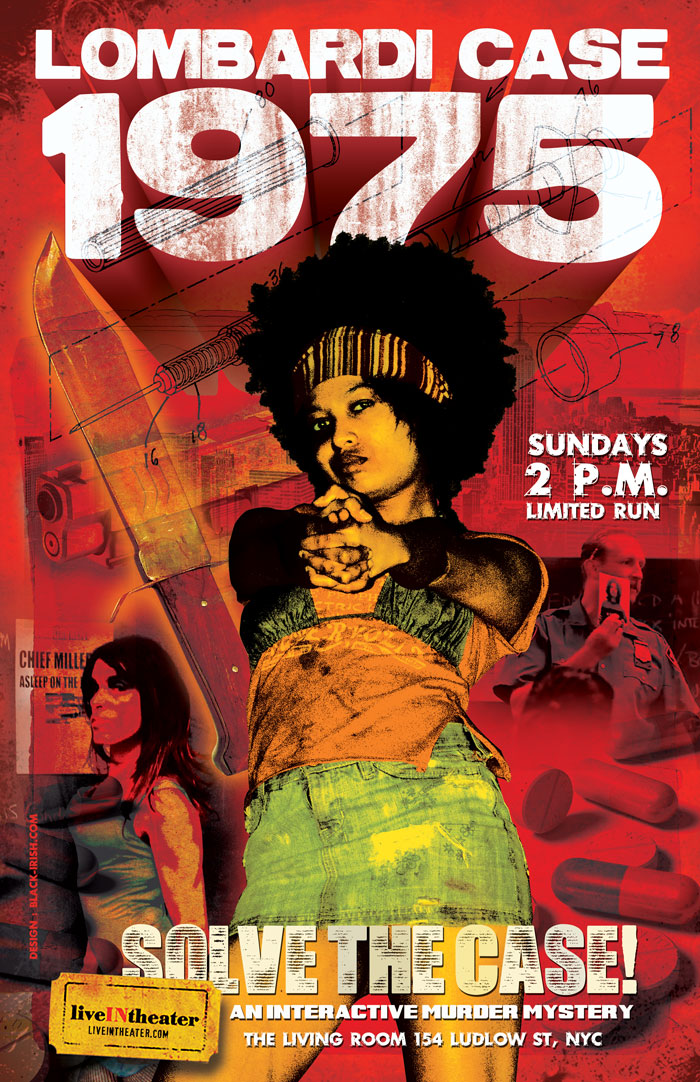 There are eight million stories in the naked city and this is one of them.

Christina Nicole Lombardi was the rebellious, good looking daughter of a U.S. senator from Connecticut. She left home, moved to New York City, and tumbled into a tragic street life. She lived in a "squat," or vacant building. She became a heroin addict and to pay for her drugs turned to prostitution. Christina stumbled from trick to trick and hit to hit. Then, in 1975, she was murdered and set on fire.

That is the background of The Lombardi Case, a street theater murder mystery of the past by the Live IN Theater company in New York that opened last week. Theatergoers are given the details of the case at the "station house" in a New York club The Living Room. The presentation is done by Chief Patrick Miller, a tough old-school cop. Groups of theatergoer/detectives, with maps and notepads, are then sent out to walk through the neighborhood, where they meet witnesses and suspects in the case, all dressed as if it were 1975. Each divulges several pieces of information and the teams then attempt to find the killer.

This is very different kind of theater, unique and wonderful. It is a trip through New York’s "Little Italy" and a trip back through the years to a time in the 1970s when New York, in the middle of a crime wave and drug epidemic, seemed like the Wild West.

My job last Sunday, yet again, was to leave the comfort of my home and, notebook in hand (no cell phone or iPad, I might add), hit the mean streets of Manhattan in search of Christina’s killer. It’s a tough job, but I’m a tough guy. I went out there in my group, my mouth curled into a snarl, my eyes wide open and my brain certain that I could cut through all the lies and fabrication and nail the killer. Girls like Christina were ruined by life in the big town and the least I could do, in the spring of 1975, was to find her murderer.

It wasn’t easy. The first person we met was Emile, a grubby maintenance guy who lived near the building where Christina’s body was discovered. He said he saw a transvestite named Manny, or, as he is known on the street, Manny the Mouth, running from the building after it was set on fire. Emile had called in the fire to police and then ran to the scene to help them investigate. Emile was angry at the degenerates who had moved into his neighborhood and frustrated by inaction on the part of the police.

Then, a few blocks later, the sun beating down on me, I met the legendary Manny. He, or she, was a fast-talking transvestite who looked pretty sharp in his black wig, that was perfectly color-coordinated with his black pirate boots. He, or she, had a long story for every question we asked. He wasn’t at the murder scene, he had befriended Christina, and he thought Chief Miller was in love with the girl and had something to do with her death.

Then there was Jesus, a babbling, bearded, disoriented street guy, obviously another victim of the drug epidemic that was sweeping New York. He had a wooden cane that had a blood smear on it and kept insisting that he found it in a dumpster.

There was Trixie, a street-smart hooker with a wild Afro hairdo and loud '70s clothing. She sported a black eye. She was clearly on drugs, too, prattling on about how she was friendly with Christina and sorry she died. She had lived with her in the squat and had three different answers for every question we asked.

Smart as I was, I couldn’t figure this one out. We trudged back to the station house, avoiding the slime and grime of 1975 New York as we went down the sidewalks.

Who did it? It was a stunner, I’ll tell you. I was wrong on this one. The squad got the killer though and poor Christina’s murder was solved.

The mean streets of 1975? They stayed the same, druggies everywhere, police cars racing back and forth, sirens wailing, the city bankrupt and the future seemingly pretty grim.

The Lombardi Case is superb street theater mystery. On the murder mystery level it is extremely well put together. The teams of detectives get a half dozen stories from each witness and plenty of denials from all the suspects. You think you have a scenario figured out and then it falls apart. You think you’ve got the killer and then new evidence changes the course of the investigation. The end, when the killer is named, is explosive.

On the history level, this case is a gem. Everything about it, from the clothing to the demeanor of the cops, smacks of the mid-1970s. I worked in New York then and remember the era well. The Live IN Theater replicated it nicely. There are cops with their shirt buttons sloppily undone, sassy hookers, snoopy neighbors and, in the station house, the whine of the police siren to keep things real.

There are constant reminders of 1975. A cop watched the Barney Miller Show on TV last night. Someone was going to see the movie Jaws that night. The police grumbled endlessly about the budget cuts that made their job tough. Hookers complained about their pimps.

Another benefit to these street theater shows is that you get to tour the streets of Little Italy and can peek into all of its quaint shops, café restaurants, crowded bars and admire its 150-year-old buildings. It’s a travel trip slid into the murder mystery.

Director Carlo D’Amore, who also wrote the play, did a fine job of staging the show over much of Little Italy and leaving everybody in suspense until the station house end. He got fine performances from Tom Staggs as Chief Patrick Miller, Walt DeForest as Sgt. Lawrence O’Donelly, Vic Pagan as Jesus, Sri Gordon as Trixy, Ricardo Perez as Manny, Rachel Brown as Claire Lombardi, Colin Blackard as Emil.

The Live IN Theater also stages The Ryan Case, about an 1873 murder (reviewed here last spring) and will open a case involving 1930s bootlegging in September.