by Bruce Chadwick
Bruce Chadwick lectures on history and film at Rutgers University in New Jersey. He also teaches writing at New Jersey City University. He holds his PhD from Rutgers and was a former editor for the New York Daily News. 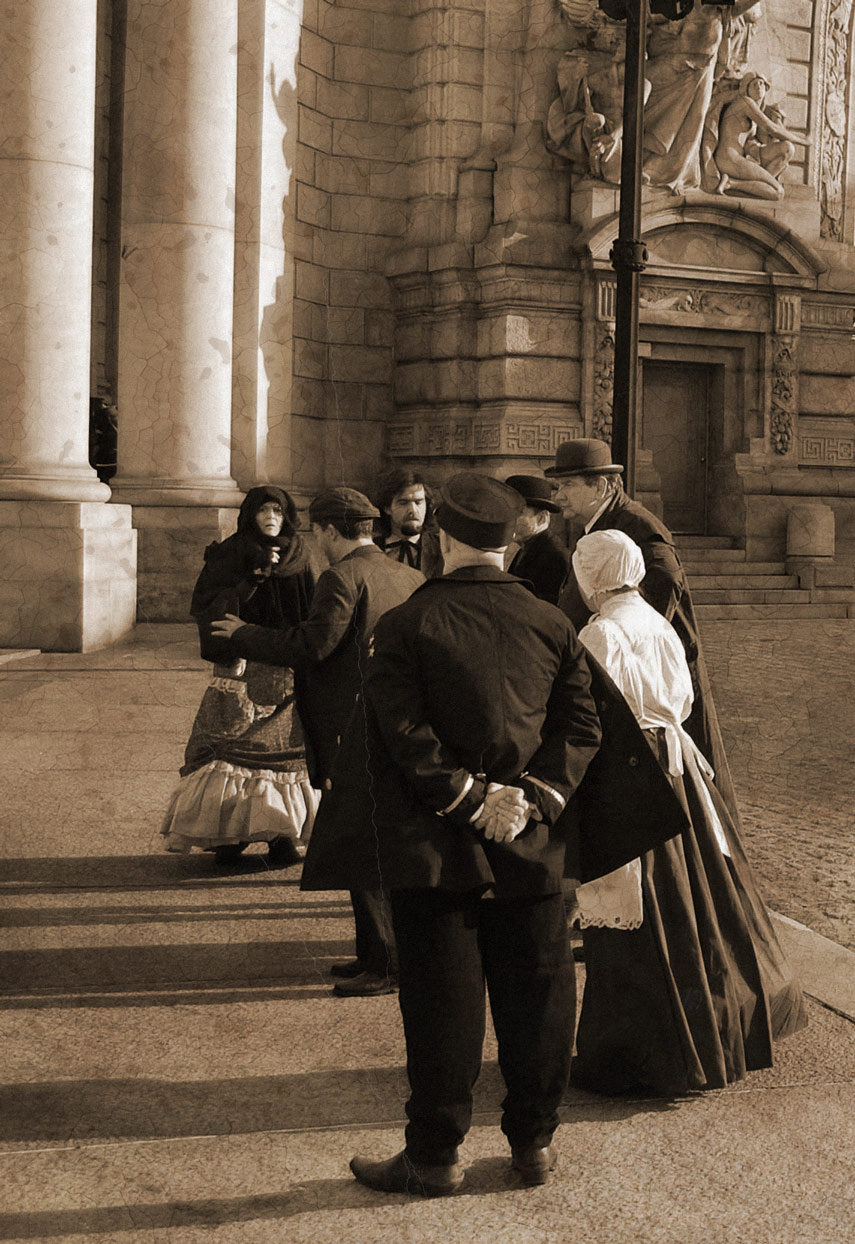 I held my detective’s notebook firmly in my right hand and my small black umbrella in my left and trudged along the mean streets of New York in search of the killer who brutally murdered of Nick and Mary Ryan, brother and sister, in their fourth floor walk-up room at 204 Broome Street, New York, on a cold December night in 1873.

It was getting dark, the rain pelted the sidewalks mercilessly and the surliest men and women I ever saw stood under awnings and in alleys and stared at me as I proceeded with my work.  They were not going to stop me. Nobody was going to stop me.  The blood thirsty thug who slit Nick’s throat and strangled poor Mary was not going to get away.  This was a tough case?  I was a tough cop.

Welcome to The Ryan Case, 1873, a brand new, different and dazzling interactive play in downtown New York that is part Law and Order, part CSI,’ part Tony and Tina’s Wedding, part walking tour and all fun for the theatergoers playing the detectives.

Live IN Theater Productions just opened the unusual play, based on a true double-homicide that was never solved, and runs it in conjunction with Lombardi.  The Ryan Murder Case 1873 starts in the theater in the church, where the story is laid out by a crusty period detective.  Nick Ryan, 28, and his sister Mary, 24, worked in a New York factory with their brother Ben in 1873.  They lived in Five Points, a neighborhood said to have the highest crime rate in the world (made famous in the movie Gangs of New York). Today, that neighborhood is in the heart of New York’s Chinatown.

One freezing winter night back in 1873, someone slit Nick’s throat and strangled Mary in her bed.  There were witnesses and suspects who were all eager to tell part of the tale.  Members of the audience were then broken down into teams of five to six detectives, given official police notebooks, police hats and a map of the neighborhood. We walked for nearly two hours and interviewed six witnesses and suspects, all positioned outside in various points of Chinatown, from taverns to community parks.

Each had several stories.  They were all dressed in 1873 clothing.  A cop had a black eye patch, a woman a tightly tied white bonnet, a bearded man a suspiciously bandaged hand.  They fancied Irish brogues to reflect the large Irish population of New York in that era and were intent on leading, and misleading, you to the killer.  Everyone asked questions and took notes.  One witness would back up the other or refute the other.  There was Ben Ryan, the nefarious and exceedingly nervous brother who may or may not have known something about hidden cash.  There was the fast talking Patrick Burke, the landlord, hat nearly pulled down over his eyebrows, a violent man.  There was his wife Bridget, who was or was not there on the night of the slayings.  She had a friend, a trollop named Sally Watkins, who had a lot of stories to tell, none good.  There was the slippery and talkative Yosef Solanski, a homeless boyfriend of Mary’s who did not seem to remember much.  There were several cops who disputed each other’s stories.  By the time we finished our investigation we had a pretty good idea of who did the dastardly deeds—but we were wrong.

The strength of the “script” is that all of the witnesses and suspects meld part of the story together to create a complicated scenario of what is basically a very simple case.  Was the landlord’s wife was not at home that night?  If not, could he have been the killer?  Did Nick walk in on someone strangling Mary?  Were the corrupt police somehow responsible, or looking the other way to protect someone?  What about Yosef, the homeless lover?  Why couldn’t he remember anything?  What happened to the silver locket?  Where was the slippery Sally on the night of the murder?  The case can play out in any number of ways and stay fresh for the different teams of detectives.

The producers of The Ryan Case 1873 have done a masterful job of combining walking tours, street theater and murder mysteries.  The audience teams go through colorful Chinatown block by block in search of the witnesses and suspects and have a great time doing so.  They talk the case through as they walk and when they get back to “headquarters” and decide on a killer.  It is fun for all and, actually, a very nicely designed case.

The real murder story of Nick and Mary, researched diligently by the producers, was a little different from the play, with more and different suspects and a slightly different scenario.  The heart of it was the same, though.  Any tale of murdered young immigrants is a good one, and the Ryan case is that.

One of the unintended benefits of the play is that members of the audience take a two-hour walking tour through the heart of Chinatown, a delight, and enjoy visiting its exotic and busy streets.

The actors in the play are really gifted.  As you stood talking to any of them on a street corner you really did think you had been transported back to 1873 (one even discussed his Civil War wounds).  They were angry, sad, enthusiastic and, at times, plain diabolical. Each one gave you a little “play” in which you were an important part.  They included J.R. McCarthy (Chief Thomas Byrnes), Carlo D’Amore (Yosef Solanski), Patrick Walsh (Patrick Burke), Alena Acker (Bridget Burke), T. Abram Lee (Ben Ryan), Jeremy X. Halpern (Officer McCork) and Dina Massery as the lovely and duplicitous Sally Watkins.

The Ryan Case is wonderful fun, good theater and a very different experience for theatergoers and historians looking for some lively drama from the mystery vaults of U.S. history.

To reach the theater: www.liveintheater.com.

Bruce Chadwick can be reached at bchadwick@njcu.edu.