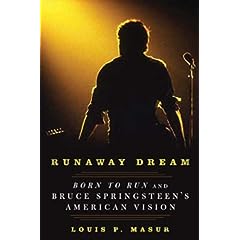 The book that had captivated Springsteen was The Pocket History of the United States by Allan Nevins and Henry Steele Commager. Published in 1942 and intended, at the height of World War II, as an account of America’s long history of fighting for freedom, Nevins and Commager dashed the book off quickly, perhaps in thirty days. It was distributed widely in England and America (at times under different titles including A Short History of the United States) and, by 1967, it had passed through more than 20 printings and was reissued in an enlarged and updated version.

Writing in a grand narrative tradition, Nevins and Commager demonstrated how to combine deep historical knowledge with an interpretive edge that was not historiographic but thematic. The two men churned out a sheaf of triumphal prose centered upon “those great historical forces and factors that have molded the modern world,” but they also offered a quiet critique of those places where the American dream went awry. They argued that “the corporation was a device to create a fictitious person who could enjoy the legal advantages but avoid most of the moral responsibilities of a human being.” They discussed workers and immigrants and the struggle for success. And they asserted that, in the late nineteenth century, “the promise of American life was not being fulfilled.”

For Springsteen, who only attended community college for a brief period and was an indifferent student in high school, the book was eye-opening. He knew at a deeply personal level that his father struggled his whole life as a working man, and now he had a more complete sense of the forces that crushed him -- capitalist greed, the class system, empire building. The book helped Springsteen to understand that one had continually to fight: for freedom, for equality, for justice, for the dignity of work and the comforts of a home. Springsteen’s work would go on to explore even more deeply than he had previously what happens to people who become victims of historic forces beyond their control. And his work would thrust him into the center of a musical and cultural whirlwind.

In 1984, Springsteen released Born in the U.S.A, an album that provided an image and a sound that rhymed with the times. Springsteen reinvented himself physically—appearing muscle bound in workingman’s shirt and jeans, a bandanna around his head. And he experimented musically—adding synthesizers to his sound for the first time. Some tried to associate the title song, which leads off the album, with a glorious resurgence of American patriotism among a younger generation (Springsteen was only 35), but anyone who paid attention to the first line, “born in a dead man’s town,” realized this was a continuation of the dual theme of entrapment and escape. “I’m ten years burning down the road/ Nowhere to run ain’t got nowhere to go,” cries the narrator. Indeed, it had been ten years since “Born to Run.”  And now, unemployed, with loved ones lost, on the edge of the penitentiary, the narrator awaits an American birthright that will not be delivered.

If the album opens with entrapment, it ends in uncertainty—times have gotten worse in the narrator’s hometown. He’s married, has a kid. He’s thinking of “getting out.” But this is no longer the dream of liberation. It is being caught, between the place that once was and now is. The father repeats for his son what his father said to him: this is your hometown. What to do about it would become a question to which Springsteen would return. But no matter how far you run, Springsteen told audiences in introducing “My Hometown” in concert, “you always, you always carry where you come from with you for the rest of your life.”

Born in the U. S .A. sold over 15 million copies and sat at number 1 on the charts in the summer of 1984.  It is the second-best selling recording of the decade next to Michael Jackson’s Thriller. In the presidential campaign that fall, Ronald Reagan, at a campaign stop in New Jersey declared “America's future rests in a thousand dreams inside your hearts; it rests in the message of hope in songs so many young Americans admire: New Jersey's own Bruce Springsteen.” Walter Mondale, the Democratic nominee, furious that Reagan would try to enlist the rock star said “Springsteen may have been born to run, but he wasn’t born yesterday.”

Of course Reagan, and other conservative Republicans, couldn’t have gotten it more wrong. “Born in the U.S.A.” was no hymnal to the glory of the nation. Rather, it is a song about the broken American promise. The singer, who abjured politics, felt he had no choice but to respond. In concert in Pittsburgh on September 21, Springsteen said “Well, the President was mentioning my name in his speech the other day.... and I kind of got to wondering what his favorite album of mine must´ve been. . . . I don´t think he´s been listening to this one.” He then launched into “Johnny 99,” a song about an unemployed worker “with debts no honest man can pay” who requests the electric chair. The song appears on Nebraska, the album Springsteen recorded immediately after his European tour in 1981, a tour that changed the way he viewed the United States.

Springsteen had become something of a populist, a “latter-day Woody Guthrie,” as one observer put it. He may have been headed in that direction all along, but it was a work of American history that inspired him. As improbable as it may seem given what historians today might view as a traditional approach to American history taken by  Nevins and Commager, Springsteen absorbed what he needed from their Pocket History of the United States in order to reframe his work and use his mounting knowledge of the past to address the needs of the present. Twenty-five years after Born in the U.S.A. Springsteen’s passion for American history has not waned.