The Burden of the Pile 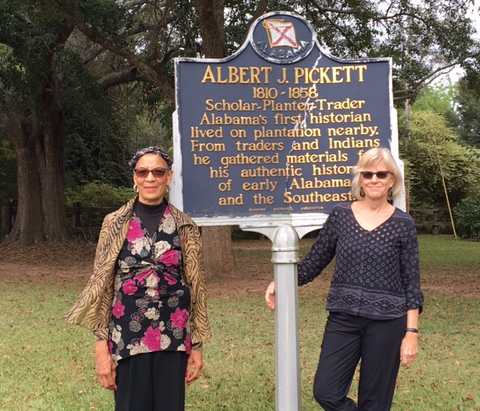 Karen Orozco Gutierrez and I in Autauga, site of the Pickett plantation where Milton Howard, Karen’s great grandfather was enslaved by my great great grandfather.. We are standing in front of an historical marker for Albert J. Pickett.

For years the papers I’d inherited gathered dust in my closet, shut away, easy to ignore. Occasionally it would cross my mind that I should take them out and go through them   – possibly sometime after I had finished alphabetizing my library, organizing my box of snapshots and culling my work files.

Eventually, very tentatively, I started to explore The Pile, with its complement of genealogical charts, wills disposing of family portraits and newspaper clippings about plantation houses turned museums, I began to feel it as a weight, pressing down on me. There were many things I didn't want to know.  There were ancestors who were slaveholders, and who had been ardent defenders of plantation slavery.  Horrible as this was, it had all happened long ago and far away.  Really, did any of it have to do with me?

I concluded that it did.   Like it or not, the burden of The Pile was mine.  As I cautiously went on sifting through it, I also went to the Internet.  Searching for my great great grandfather’s name eventually brought me to AfriGeneas, a website devoted to helping African Americans trace the histories of their enslaved ancestors.  There I found a probate record of the slaves A.J. Pickett had inherited from his father: 40 individuals identified by first name and market value.

And on Afrigeneas, I encountered  Karen Orozco Gutierrez.  On the website message board, she’d posted a note searching for anyone who might have information on an Alabama planter named Albert James Pickett.  On his plantation, she believed,  her great grandfather, Milton, had been enslaved.  When I wrote to her, identifying myself as A.J. Pickett’s great great-granddaughter, she immediately emailed me a response.

She didn’t want to overwhelm me, she wrote, but she had information about her ancestor and his relationship to mine. Her ancestors’ freedom and their history had been stolen from them.  As I learned Karen’s story,  I came to understand that while I might experience The Pile as a burden, it was also an emblem of my privilege.

Karen and I at the Montgomery County Probate Archives, where we searched for information on Milton Howard, Karen’s great grandfather.

Karen and her family members had devoted years to research – poring over bills of sale and census documents and pension records. Based on this and on Milton’s own testimony, they had painstakingly constructed a provisional timeline of his life.  She shared with me what they had learned so far:  Milton and his family had been free people of color living in Muscatine County,  Iowa.   Around 1850, when he was a child the entire family was kidnapped by slavers, taken down the Mississippi on a steamboat, and sold, probably in New Orleans, to a family of Alabama planters named Pickett.

Milton and his family were victims of what has been called the Reverse Underground Railroad.  In the decades before the Civil War, traffickers and slave traders kidnapped thousands of free African Americans in the North and sold them “down the river” into slavery.   That is how Milton, born in Davenport, Iowa, came to spend most of his childhood enslaved on one of A.J. Pickett’s plantations in Alabama.

Before the Civil War broke out, Milton later told an interviewer, he escaped, and made his way back to Iowa.  After a few years, he joined the Union Army.  He never returned to the South.

Following this thread of my great-great-grandfather’s story led me to a living person and to pain that has persisted into the present. It felt very different from scrutinizing a piece of paper.

In his famous 2014 Atlantic article, “The Case for Reparations,” Ta-Nehisi Coates skillfully builds his argument on specific cases, person by person, loss by loss.*   Milton’s story, as related by Karen,  is its own case history of what might have been:  “Milton was born free,” she wrote to me, “so his mother must have been free, too. Had the family not been kidnapped, their lives would have been very different”

Injustice and abuse are abstract words, but there is nothing abstract about the kidnapping and enslaving of a child and the possible futures it precludes.  “Existential violence” is Coates’ term for this.  He has written that among other things, slavery meant “the constant threat of having a portion, or the whole, of your family consigned to oblivion.”

After writing to each other for months, Karen and I traveled to Montgomery together to search for Milton in the Probate archives there. Against all odds, Karen was able to locate a document that consigned Milton into a trust on behalf of Sarah Pickett, A.J.’s wife. I wrote an account of our trip, “Daring to Face the Past” that was published in the September, 2020, issue of Smithsonian Magazine. Some time after our return Karen and I joined a webinar to talk about our connection through slavery.

More recently, Nikole Hannah-Jones made the case for reparations in the New York Times Magazine.

The document that consigned Milton into trust.

Read more about Ann's Confederates In My Closet on her website.