The Connection Between Joe Biden and Robert F. Kennedy 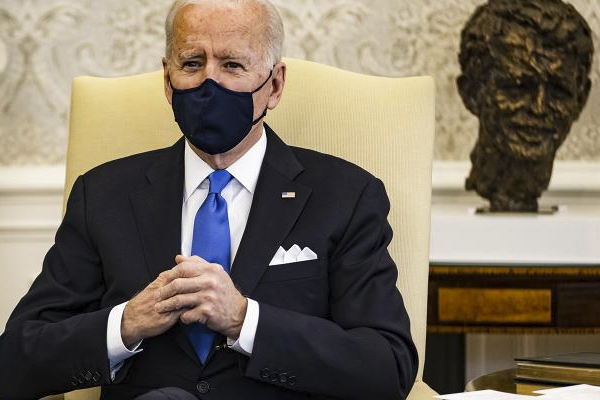 Robert F. Kennedy has an uncanny connection to the 46th President of the United States.  Their links to each other demonstrate the evolution of the two men, one who might have been President, and one who, after an extended period of trying to become President, has finally ended up in the White House.

Secondly, Biden has a whole group of busts and portraits of many Americans in the Oval Office that he has stated are inspirations, but it is the RFK bust which gets the most attention due to its specific placement behind him when he makes public statements.

The question is why this emotional connection has developed between RFK, who died 53 years ago, and Joe Biden, who in 1968 was 25 years old and starting to plan his political career.

Robert F. Kennedy was born to a wealthy Catholic family of privilege, and never understood for much of his life the struggles of ordinary Americans seeking better lives.  He became humanized by public service under his brother and in the years after JFK’s Presidency.

Joe Biden was born to a struggling Catholic family which went through hard times as Biden went through his childhood.  But both Catholic political leaders moved beyond their traditional Catholic upbringings to evolve over time to belief in Social Justice by different paths.

Kennedy came into public life working for the infamous Senator Joseph McCarthy of Wisconsin, and had a reputation for a hard nosed, highly competitive, and pugnacious personality. But he evolved, after the tragedy of the death of his brother, President John F. Kennedy, to become much more liberal in tone and in actions than his brother had ever demonstrated.

As a United States Senator, RFK made an issue of the hunger of African Americans in the Mississippi Delta, traveled to South Africa to speak out against the apartheid policy of that white supremacist government, campaigned for better work conditions for Hispanic farm workers in California and elsewhere, and promoted the War on Poverty of President Lyndon B. Johnson, including the promotion of rebuilding urban slums, including the Bedford-Stuyvesant housing renovations in Brooklyn.

He also came to oppose the escalation of the war in Vietnam, and after hesitating to challenge Johnson in 1968, he campaigned vigorously for the nomination from March 16 to June 5, 1968, when he was shot by Sirhan Sirhan in Los Angeles, on the cusp of possibly becoming the Democratic nominee. He had evolved on social justice and human rights, and had formed a rare coalition of all classes and races, including the poor, the middle class, and many wealthy liberals who saw him as a champion who could overcome traditional divisions and alternatives.

Joe Biden was impacted by the death of RFK, and sought a public career in a state where being traditionally liberal was a hard sell, so he developed as a more centrist Democrat of a new generation, elected to the Senate a few weeks before his 30th birthday.  But right after his election, within weeks, he lost his wife and daughter in a horrible automobile accident, and had to care for his two sons who were also injured. As a newly single father, he was ready to give up the Senate seat he had won. But he was dissuaded from doing so by the Democratic Senate leadership, which convinced him to stay on, and by his own sister, who spelled him in taking care of his children.  The emotional support by Senators Hubert Humphrey, Mike Mansfield and others sustained him, and he became a growing factor in American politics over the next fifteen years, but stayed in the center politically.

So Biden gained a reputation as an ambitious moderate, who kept a cozy relationship with the corporate entities, including banks, that used his home state of Delaware as a convenient location for their business dealings, including the issue of credit cards and setting of interest rates.  He supported the Bankruptcy Abuse Prevention and Consumer Protection Act of 2005 which made it more difficult for people to go bankrupt, and the credit card industry knew they had a champion in Joe Biden.

His opposition to school busing also reflected the views of a state that had promoted racial segregation over many decades.  He was a vigorous critic of school busing, which was the viewpoint of his constituents, and he was perceived as a critic of de facto segregation patterns. He also was criticized by many liberals in the 1970s and 1980s for his cordial relations with Southern segregationists, such as Senator Strom Thurmond of South Carolina and Senator Jesse Helms of North Carolina.

But he also offered a younger, fresh view on many other issues, and started a Presidential run in 1987. That year he was forced out of the running by his own misuse of the comments and statements of a British Labor Party leader, and his own exaggeration of his academic record. It turned out that his withdrawal was a blessing, as it was followed by emergency surgery for two aneurysms that nearly cost him his life. His second wife nursed him back to health, and after a six month absence, he returned to his duties in the US Senate.

Biden became controversial for his handling of the Clarence Thomas Supreme Court nomination in 1991, as he headed the Senate Judiciary Committee, and was accused of mishandling the treatment of Anita Hill.  And Biden was controversial over time for his leadership in the passage of the 1984 Comprehensive Crime Control Act, and the 1994 Violent Crime Control and Law Enforcement Act, later seen by many observers as racist in nature.

Biden tried again for the nomination for President in 2008, but could not compete against the star power of Hillary Clinton and Barack Obama. Becoming Vice President was a career renaissance in many ways, as Biden became a true partner of Barack Obama, and performed in the Vice Presidency in the same manner as Walter Mondale had earlier under President Jimmy Carter.  He planned to try for President again in 2016, when his older son Beau was stricken with cancer and died in May 2015, forcing him to reject the race.

But in 2019, feeling a compulsion to work against President Donald Trump, he began a presidential campaign that seemed highly doubtful. Despite his early poor performance and losses in Iowa and New Hampshire, South Carolina turned around his campaign, and his record of overcoming adversity gave him a renewed sense of mission and commitment, transforming him into a different perspective, just as with Robert F. Kennedy a half century earlier.

Now, as the 46th President, Joe Biden has committed himself clearly to a much more progressive view of many public issues, in a vein similar to RFK in the 82 days of his 1968 campaign and his three and a half years as a US Senator.  In his first Hundred Days of his Presidency, Joe Biden has become a progressive champion who offers the possibility of the most advanced legislative agenda of any Democrat since Lyndon B. Johnson six decades ago.  And as he pursues an advanced progressive agenda, Joe Biden has the bust of RFK over his shoulder rooting him on.

Biden is actively promoting the vaccination of Americans against the COVID-19 pandemic, and has more than doubled the 100 million doses he pledged in the first hundred days.  He is actively pursuing a massive infrastructure plan, very bold in nature, and has gained the backing of former skeptics, including Senators Bernie Sanders of Vermont and Elizabeth Warren of Massachusetts and New York Congresswoman Alexandria Ocasio-Cortez.

Biden is also taking leadership on environmental issues, health care reform, voting rights, law enforcement reform, gun violence, immigration reform, women’s rights, and civil rights, and many observers sense America is entering a new Progressive Era, and that Biden has been more active in his first hundred days than any President since Franklin D. Roosevelt and the New Deal.

In foreign policy, Biden is promoting the revival of close relations with our traditional allies, and speaking up forcefully on human rights matters involving our adversaries, including China, Russia, North Korea and Iran.  His use of executive orders to reverse much of the damage and harm of the four years of Donald Trump’s Presidency also gives hope of a transformation from the era of Ronald Reagan after two generations of influence.  Biden’s public opinion ratings show a positive image of him prevails, and in polls, the American people support his efforts and initiatives.

The two men, Robert F. Kennedy and Joe Biden, share the characteristics of empathy and compassion, having suffered great emotional losses, but gaining a renewed sense of the importance of humanity and decency in public life.  RFK’s potential career as a renewed leader was cut tragically short a half century ago, but Joe Biden has persisted and endured through many ups and downs personally and politically, and now is able to fulfill his new chance to redeem himself from his past errors and shortcomings.

The path ahead is unknown, since the Senate is evenly divided and Democrats have only a small margin in the House of Representatives, but it will be a mission to overcome a series of public crises that can be seen as more challenging than even the turmoil of the 1960s. It seems clear that Joe Biden will transform the nation in ways not yet known.