David P. Barash is professor of psychology emeritus at the University of Washington; among his recent books is Through a Glass Brightly: using science to see our species as we really are (2018, Oxford University Press). 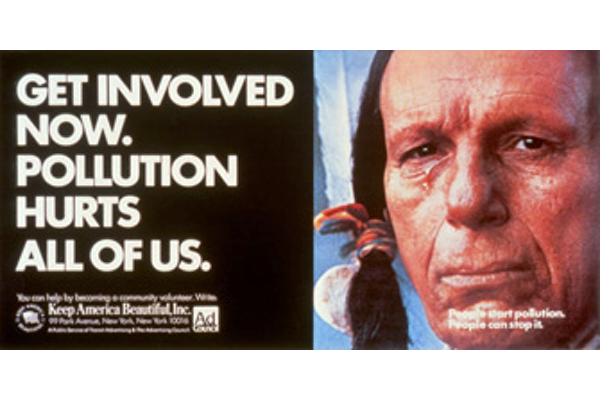 Today, many of us accept personal responsibility for climate change and struggle to adjust our carbon footprints, while giving little attention to the much larger effects of major corporations and countries. We might want to learn something from how mid-century Americans concerned about litter were conned and co-opted by forces larger and more guilty than they.

Shortly during and after the Second World War, Americans produced much less garbage, having become accustomed to reusing items whenever possible and throwing things away only when absolutely necessary. This became a serious challenge, however, to newly emerging industries that yearned to profit from making and selling throw-away items, notably glass, plastics, and paper products. These industries accordingly launched a vigorous advertising campaign, inducing people to recalibrate their wartime frugality and start throwing things away after a single use. Americans were told that it was more hygienic, more convenient and (not mentioned), more profitable for those manufacturers who made and sold those items.

But by the early 1950s, the throw-away campaign had begun to backfire as Americans started seeing nearly everything as garbage.  The glass bottles that people used to rinse and reuse were increasingly thrown out of car windows, which had an unfortunate tendency to end up broken in a field, where grazing cows would either step on them and injure themselves or consume them and die. Dairy farmers became increasingly incensed, especially in Vermont, then as now a dairying state.

In response, Vermont passed legislation in 1953 that banned disposable glass bottles. Corporate America worried that this might be a harbinger of restrictions to come, so many of the bottle and packaging companies banded together in a counter-intuitive but politically and psychologically savvy way: They formed something called Keep America Beautiful. It still exists today, under a label that can only be applauded, not only for what it officially stands for but also for its social effectiveness.   Keep America Beautiful began as an example of what is now often criticized as “virtue signaling,” but in this case, the goal wasn’t simply to signal virtue or even to engage in “green- washing.”

Rather, the reason such behemoth companies as Coca Cola and Dixie Cup formed what became the country’s premier anti-littering organization was to co-opt public concern and regulatory responses by shifting the blame from the actual manufacturers of litter—those whose pursuit of profit led to the problem in the first place—to the public, the ostensible culprits whose sin was putting that stuff in the wrong place. Garbage in itself wasn’t the problem, we were told, and industry certainly wasn’t to blame either! We were.

It became the job of every American to be a responsible consumer (but of course, to keep consuming) and in the process to Keep America Beautiful. At first and to some extent even now, legitimate environmental organizations such as the Audubon Society and the Sierra Club joined. Keep America Beautiful went big-time, producing print ads, billboards, signs, free brochures, pamphlets and eventually Public Service Announcements.

Keep America Beautiful coordinated with the Ad Council, a major marketing firm. People of a certain age will remember some of the results, including the slogan “Every litter bit hurts,” along with a jingle, to the tune of Oh, Dear! What Can the Matter Be: “Please, please, don’t be a litterbug …” Schools and government agencies signed on to the undeniably virtuous campaign. It’s at least possible that as a result, America became somewhat more beautiful but even more important, that troublesome Vermont law that caused such corporate consternation was quietly allowed to die a few years after it had been passed, and – crucially – no other state ever emulated it and banned single-use bottles.

Appearing on national television in 1971, it showed a Native American (the actor was actually Italian- American) with a conspicuous tear in his eye when he encountered trash, while a voice-over intoned, “Some people have a deep, abiding respect for the natural beauty that was once this country. And some people don’t. People start pollution. People can stop it.” In short, it’s all our fault.

Iron-Eyes Cody’s philosophy is reminiscent of Smokey Bear’s “Only you can prevent forest fires.” Of course, Smokey is right. Somewhat. Individuals, with their careless use of matches, can certainly precipitate forest fires, but as today’s wildfire epidemics demonstrate, there are also major systemic contributions: Global over-heating with consequent desiccation, reduced snow-melt, diminished over-winter insect die-offs that produce beetle epidemics that in turn leave vast tracts of standing dead trees, and so forth. Individuals indeed have a responsibility to keep the natural environment clean and not to start fires, but more is involved.

It is tempting, and long has been, to satisfy one’s self with the slogan “peace begins with me.” As logicians might put it, personal peace may well be a necessary condition for peace on a larger scale, but even if it begins with each of us, peace assuredly does not end with me, or you, or any one individual. The regrettable truth is that no amount of peaceful meditation or intoning of mantras will prevent the next war, just as a life built around making organic, scented candles will not cure global inequality or hold off the next pandemic.

Which brings us to global climate change. There is no question that each of us ought to practice due diligence in our own lives: Reduce your carbon footprint, turn off unneeded appliances, purchase energy-efficient ones, and so forth. Climate activist Gretta Thunberg is surely right to emphasize these necessary adjustments and, moreover, to model personal responsibility, for example, by traveling to the UN via sailboat. But she is also right in keeping her eyes on the prize and demanding that above all, governments and industry change their behavior.

Amid the barrage of warnings and advice about personal blame and individual responsibility, there is a lesson to be gleaned from the corporate manipulations that gave us Keep America Beautiful, and its subsequent epigones: Even as we are implored to adjust our life-styles and as we dutifully struggle to comply, let’s not allow such retail actions to drown out the need for change at the wholesale level, namely by those corporations and governments whose actions and inactions underpin the problem and whose behavior – even more than our own - must be confronted and overhauled.

(Just after writing this piece, I discovered that some of its ideas were covered in an episode titled “The Litter Myth,” aired September 5, 2019, on NPR’s wonderful history-focused podcast, “Throughline”: https://www.npr.org/2019/09/04/757539617/the-litter-myth.  Anyone wanting a somewhat different take on this topic would do well to “give a listen.”)