Blogs > Steve Hochstadt > The Latest Polls Are Worrying Me

The Latest Polls Are Worrying Me 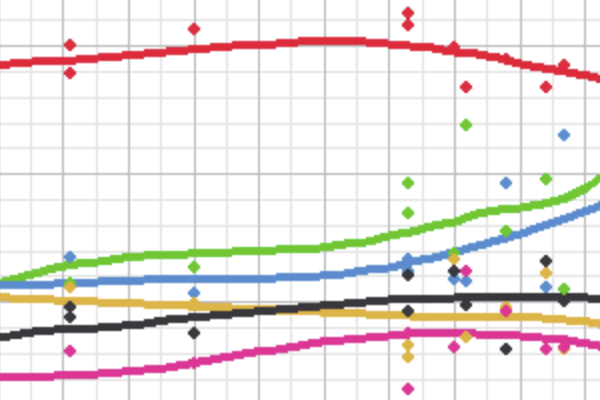 A NYT article on Monday by Nate Silver, the guru of understanding polls, frightened me: he said that Trump could win in 2020. The main evidence is a poll showing Trump running neck-and-neck with the leading Democrats in certain arbitrarily selected “key” states, every race very close. I have been relying for my sanity on Trump’s approval rating in many polls, which is down near 40%. How could he beat anybody? Maybe I need to revise my understanding of approval. Perhaps enough people disapprove of Trump, but are willing to vote for him.

I don’t think that polls a year ahead of time mean much about what will happen, especially if they are close. There are other polls, though, which cause me more anxiety about the state of our nation. Whether Trump wins next year or not, the views of the minority of Americans who populate his “base” are troubling.

In the most recent head-to-head polls, white working-class respondents preferred Trump by 25%, just the same percentage as they preferred him in 2016 against Clinton. College-educated whites gave the nod to Democrats, but only by 6 - 10%. Those Americans, who are as a whole less interested in real political information, still like Trump, after all he has done. A large minority of those who have been trained to understand that information still pick Trump.

Some aspects of the general approval polls offer more and maybe more unpleasant information. The tracking of Trump’s approval ratings by the Washington Post and ABC News during his whole presidency shows both remarkable stability and, maybe, the beginning of a serious downturn in the wake of impeachment, as his approval among Republicans dropped to 74%. There will be lots more points on this graph, so little weight should be put on this point. More notable is the lack of change among his most fervent supporters, those who “strongly approve of him”, which has stayed between 60% and 70%.

Those squishy approval polls are now being directed at the state level to help predict the 2020 decision in the Electoral College. It’s possible to be heartened by the latest poll, just before impeachment began. More approve of him than disapprove in only 17 states, mostly states in the South or next to it. More disapprove than approve in all the states that the NYT article isolated as “key”. One year ago, his approval ratings were positive in 24 states.

Fox News reported that their two polls this October showed that more people want Trump to be impeached and removed than oppose it, 50% to 41%. But here’s the scary part. Among those who oppose impeachment, 57% say new evidence cannot change their minds. That adds up to about one quarter of those surveyed. They probably all belong in the category of those who think the whole impeachment inquiry is “bogus”, 39%.

Recent polls show that Republicans who are regular viewers of FOX News are much more likely to be hard-core Trump supporters. Over half of Republicans who support the president and watch Fox News say there is “virtually nothing he could do to make them stop supporting him.” A different poll two years ago shows the same thing. In August 2017, 61% who approved of Trump said they couldn’t think of anything he could do that would make them disapprove of his job as President.

For me, the scariest segment of the American electorate has been identified by some political scientists as “chaos-seekers”. They are so disaffected from our political system, that they want to undermine it, even destroy it. They use social media to share outlandish stories, such as the “Pizzagate” rumor, the false story about Obama’s birth, and Alex Jones’ lies about the Sandy Hook Elementary School shooting being faked. They don’t necessarily believe them to be true. “For the core group, hostile political rumors are simply a tool to create havoc.” The political scientists conducted thousands of interviews, and found a significant minority of people who agreed with statements like the following. “I fantasize about a natural disaster wiping out most of humanity such that a small group of people can start all over.” “I think society should be burned to the ground.” Sometimes I just feel like destroying beautiful things.” These people tended to be Trump supporters.

A study from 2018 found that Trump supporters tended to “take a belligerent, combative approach toward people they find threatening.” The kind of authoritarianism that Trump’s most fervent supporters embody is “the wish to support a strong and determined authority who will 'crush evil and take us back to our true path.’” The Guardian recently listed 52 Trump supporters who carried out or threatened acts of violence since his campaign began. Since Congressman Adam Schiff became the leader of the House impeachment inquiry, he has been subject to violent threats on social media, often approvingly quoting Trump’s comments about him.

A video portraying Trump shooting his critics inside a church was played at a conference for his supporters at Trump’s National Doral Miami resort in early October. The pastor who gave the benediction at the 2016 Republican National Convention told the crowd there, “We’ve come to declare war!” Conference-goers roared back: “War! War!”

Are we near that point now? What if Trump loses the election?

Today, the only important polls will be taken, the elections in Virginia, Kentucky, and Mississippi. They will provide hints about 2020. Then we have only 12 months left to worry.