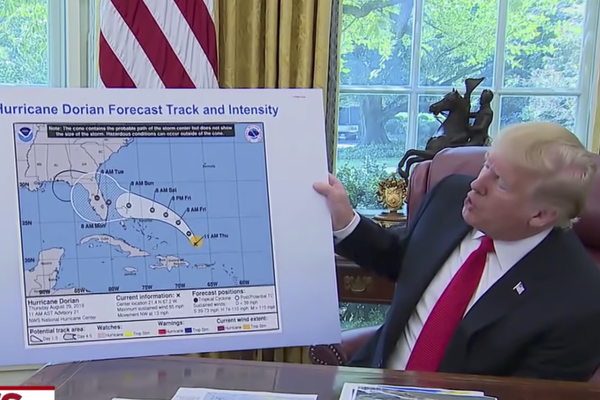 Trump’s latest use of our government to cover up his mistakes, this time about weather forecasting, is revealing about the nature of his Presidency.

No government weather maps showed Hurricane Dorian threatening Alabama. On Thursday, August 29, Trump was briefed in the Oval Office on the Hurricane by the head of FEMA, which released a photo of him looking at a map of where Dorian had been and where it was headed. A white curved line showed the areas that Dorian might possibly hit. Not Alabama.

Early Saturday morning, August 31, the National Hurricane Center realized that Dorian was not going to hit Florida directly, and threat projections were shifted further east. The next morning, Sunday, at 7:51 AM Trump tweeted the following: “In addition to Florida - South Carolina, North Carolina, Georgia, and Alabama, will most likely be hit (much) harder than anticipated.”

The National Weather Service’s Birmingham office reacted in 20 minutes, tweeting at 8:11: “Alabama will NOT see any impacts from #Dorian. We repeat, no impacts from Hurricane #Dorian will be felt across Alabama. The system will remain too far east.”

For Alabamans, whew. For Trump, though, emergency – he had made a mistake. Nobody died, his tweet perhaps scared some people, but he had been wrong, and that was impossible. At noon on Sunday at FEMA headquarters, he repeated that Alabama remained in the path of the storm, based on “new information”.

As the Hurricane moved north, doing tremendous damage but having nothing to do with Alabama, the storm in Washington about Alabama intensified. On Monday Trump repeated his clam that Alabama was in danger. By then, it was clear to everyone that Alabama would remain untouched, and the controversy shifted to whether Trump was correct that Alabama had been part of earlier forecasts. On Wednesday, Trump brought out the map from his briefing 6 days earlier. Somewhere in the White House, a new black Sharpie line had been added, extending Dorian’s “threat” another 100 miles west into a corner of Alabama.

On Thursday, Rear Admiral Peter J. Brown, Trump’s homeland security and counterterrorism adviser, released a statement that Alabama had been in the path of the storm. Wilbur Ross, the Secretary of Commerce who oversees NOAA and the National Weather Service, threatened to fire any employee who contradicted Trump.

On Friday afternoon, NOAA disavowed the Birmingham NWS office’s statement that Alabama would not be hit.

We all might soon forget this saga of Dorian and Alabama when the next outrage emerges, but its details display the character of our current government. Right-wing populist politicians and parties in democratic systems across the globe are being examined for their similarities to 20th-century fascists. Trump however is no strongman, he commands no armed militia of followers, who brutalize opponents. He acts more like the unelected monarchs who ruled for hundreds of years by divine right. Trump is the state and “L’état, c’est moi,” as Louis XIV is supposed to have said.

Let’s add up some individual instances where Trump has identified the USA with himself, made the government into his personal servants, and claimed unprecedented powers to do whatever he wants. As soon as he was inaugurated, he enlisted the National Park Service to crop photos of the inauguration to pretend that his crowd was larger than Obama’s. He ordered by tweet all US companies to stop doing business with China. He claimed he had the right to end the Constitutional provision of birthright citizenship by executive order. He threatened to close our southern border with military force to stop migrants. He deployed the National Guard and active-duty troops to the southern border to deal with the “emergency” that he had created.

In response to Robert Mueller’s investigation, Trump’s lawyers created an argument that the President cannot commit obstruction because he can do anything he wants: “the President has exclusive authority over the ultimate conduct and disposition of all criminal investigations and over those executive branch officials responsible for conducting those investigations. Thus as a matter of law and common sense, the President cannot obstruct himself or subordinates acting on his behalf by simply exercising these inherent Constitutional powers. This led Trump to claim that he has the “absolute right to PARDON myself.”

King George III said during the American Revolution that “A traitor is everyone who does not agree with me.” Trump has often characterized his critics as traitors: when Democrats did not applaud his State of the Union speech in 2018; any Jews who vote for Democrats; congressional Democrats for opposing his anti-immigration policies. The website AXIOS counted 24 times by this past June that Trump had accused other Americans of treason.

Things didn’t turn out so well for George III, when the American colonists decided that he did not represent them. To prevent Trump from crowning himself King Don I, Americans will again have to reject divine right pretensions.