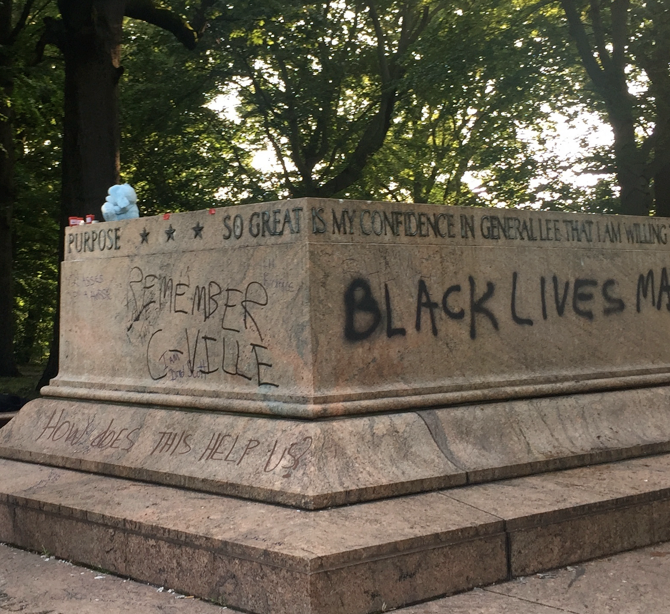 The base of the double equestrian monument to Robert E. Lee and Stonewall Jackson plainly shows the influence of Charlottesville. So does the absence of Lee and Jackson.

Thankfully, not much happened on the just-past first anniversary of the white supremacist riot in Charlottesville. It is clear, however, what a difference the events of a year ago made to the debates about Confederate monuments that still rage across America. The impact was transformative. Indeed, we can refer to “B.C.” (“Before Charlottesville”) and after.

In Baltimore, for example, Mayor Stephanie Rawlings-Blake had set up a commission to advise what to do with that city’s four main Confederate monuments, after at least one got vandalized following the death of Freddie Gray while in police custody. Soon it became clear, however, that neither she nor the commission chair wanted to consider removing any of them. The commission delivered a mixed report to the mayor, who then left office without doing anything. Three days after Charlottesville, Baltimore’s new mayor took down all four.

Helena, Montana, boasted a fountain proclaiming, “A loving tribute to our Confederate Soldiers." Of course, Montana never had any Confederate soldiers.  For that matter, Montana hardly had any Union soldiers.  Montana was still Indian country during the Civil War and for some time thereafter, as George Armstrong Custer found out at the Little Big Horn some fifteen years after the Civil War started. No matter; during the Nadir of race relations, 1890-1940, the United Daughters of the Confederacy knew exactly what they were doing. Across the South, and even within sight of the Montana state capitol, the UDC used these monuments to declare their dominion over the landscape and the respectability of the Confederate cause.

B.C., we who argued against this landscape of white supremacy merely seemed to be whistlin’ “John Brown's Body." After Charlottesville, the Native American caucus in the Montana legislature asked for the fountain’s removal; within five days, it was gone.

After Charlottesville, mayors across the country realized their Confederate monuments were indefensible on the basis of good governance. They had become flashpoints of conflict. Leaving them alone was simply asking for trouble. If the city did nothing, then at the least, people would paint them again and it would fall to the government to clean them up. (Of course, another course of action would be to give both sides their say by letting the tags remain.) After Charlottesville, officials did not have to take a stand on the meaning of the Confederacy. They could act without having to take a stand on their values.

To be sure, some did take a stand. Mayor Landrieu of New Orleans, in a speech he titled “Truth," eloquently explained the values that underlay his removal of that city’s four Confederate monuments.

But even if cities remove these celebrations of white supremacy for the sake of expedience, so long as they put up markers to explain what happened, all will be well. These markers need to tell what monument stood here, why and when it went up, and why and when it came down. Then citizens will learn that we began getting secession and the Confederacy wrong during the Nadir. After the murders by a neo-Confederate in Charleston in June 2015, we began to get this history right, on our landscape. After Charlottesville, they can infer that their city no longer celebrates white supremacy, at least not in its important public spaces.