Dinesh D’Souza Lied About My Work 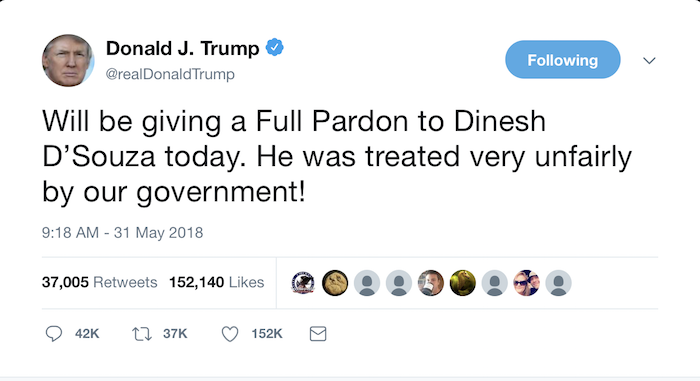 Dinesh D’Souza is back in the news. Ted Cruz, Republican senator from Texas, claims D’Souza got convicted of a campaign finance violation because he “was the subject of a political prosecution,” targeted because “he’s a powerful voice for freedom, systematically dismantling the lies of the Left – which is why they hate him.”[1]Cruz proposed to President Trump that he pardon D’Souza, and on the last day of May, Trump complied.

I can’t speak for “the Left.” No leftists think I’m on the left. (Right-wingers do.) I can speak for myself, however. While I don’t hate D’Souza, I surely do dislike him heartily. Why? For precisely the opposite of what Ted Cruz tweeted.

In my experience, D’Souza is the liar. Certainly he lied about my work, and he did so deliberately.

I had written about the bias that is built into every SAT test, ACT test, and IQ test, by the nature of the statistical hoops their creators impose upon new items. I learned about that bias from teaching first at Harvard University (1966-68) and immediately afterward at Tougaloo College (1968-75). The contrast was dramatic.

My best students at Tougaloo, a black college in Mississippi, had extraordinary ability. They would have stood out in the Sociology Pro-Seminar I had just been teaching at Harvard. One Tougaloo graduate went on to finish her doctorate in sociology at the University of Wisconsin in just three years. Others earned doctorates from Harvard, Berkeley, and other sociological powerhouses. Yet the SAT scores of these outstanding students averaged around 560. (Probably you know that SAT scores range from 200 to 800. 500 is about median.)

A 560 at Harvard, on the hand, was quite different. My pro-seminar in 1966-67 included one student who simply could not do the work. (Sociology is hard.) Plenty of undergraduates did not do the work, but Peter could not. I know, because I met with him, talked with him about how much and how he studied, and, in that simpler time, looked up his records. He had been admitted as a legacy; scored 520/560 on the SAT, in Harvard’s lowest quintile; and simply could not do high-level college work, at least not in sociology. (He transferred to an easier major.)

This experience convinced me that "aptitude tests" like the SAT did not really measure aptitude, at least not across different subcultures and positions in social structure. Years of research on the SAT showed me how and why it failed. In a word, it was (and remains) biased.

An example can make the bias clear. Imagine a verbal item built around the word “environment.” This word has several meanings. I have cold-called on scores of people in my audiences and asked, “What does ‘environment’ mean, to you?” Usually I get replies emphasizing the natural environment – ecology, pollution, etc. Although the person I called on is nervous, I immediately say “Yes, the natural environment, we’ve all used the word that way, haven’t we?” The room nods.

What does that difference mean for the SAT? It means that an item that uses “environment” in its social context will subtly favor black students. White students outscore black students by about 7% on most items. On this item, blacks might outscore whites a bit: maybe 81% get it right, compared to just 78% of whites. Immediately the item gets discarded. It has “misbehaved” statistically. In psychometric terms, it has a “negative point-biserial correlation coefficient.” The people getting this item correct have, on average, lower overall test scores than the people getting this item wrong. In short, the wrong people get it right.

For this reason, despite the best efforts of staffers at ETS (and ACT et al.), no item favoring African Americans ever appears on the final edition of an SAT test (or GRE, or test in a specific discipline, or IQ test).

I invented a little demonstration, sometimes called “the Loewen Low-Aptitude Test” or “the Collegiate IQ Test,” to illustrate the problem to a lecture hall full of students.[3]Its point was to persuade my largely upper-middle-class white audiences that these tests do not really measure aptitude by giving them a test that was biased against them, rather than against “others.” My test had an item that favored the highest 1%, a “black” item, a working-class item, etc. Most people wound up scoring at or just above random, translating to an IQ of 60 to 90. They felt stupid.

In his breakout book Illiberal Education: The Politics of Race and Sex on Campus, Dinesh D'Souza picked on my black item, which used vocabulary more familiar to African Americans – in this case two urban slang terms – to form an analogy on which whites score lower. My point was to show that no item truly tests intelligence, aptitude, reasoning, or any other higher mental process if its underlying vocabulary is unfamiliar to the test-taker. In his summary, D’Souza deliberately misled his readers and misstated my point:

"[T]his line of criticism stereotypes blacks. [Loewen's] model presumes that blacks are most at home in the world of slang, womanizing, and drugs. Why a familiarity with this vocabulary is a good preparation for college, Loewen does not say."

When I first pointed out that D’Souza had misrepresented me, I titled the essay “Dinesh D'Souza: Knave or Fool?”[4]But D’Souza is no fool. He certainly knew my intent; his misrepresentation was deliberate.

Of course, lying on behalf of white supremacy is not considered, shall we say, a “black mark” on one’s character to our Pardoner-in-Chief. Neither are the lies D’Souza tells in his “documentary” films. Quite the contrary: since D’Souza lies on behalf of the right, that is a good reason (to Cruz and Trump) for pardoning him. D’Souza’s sentence was hardly onerous. He should have served out the few months of probation remaining on it. He was not pardoned as an act of mercy. His pardon was a political statement, on behalf of lying and against true scholarship.

Ironically, even Trump’s pardon involved lying: the president denied anyone ever asked him to pardon D'Souza, while both Cruz and D’Souza claim Cruz did. Trump also claimed he had never met D’Souza, while a former aide recalled that they had talked at Trump Tower in 2012, shortly before the release of D’Souza’s movie, “Obama’s America.” Trump agreed to help promote the movie and tweeted later that summer that it was “an amazing film.”[5]For that matter, D’Souza was not exactly convicted; he pled guilty. If he was not guilty, then he lied.

Also ironically, D’Souza’s most recent book makes use of the very term we’ve been discussing: The Big Lie: Exposing the Nazi Roots of the American Left. I hope this essay makes clear why I’m not going to buy it or even read it. The first sentence introducing D’Souza on “his” page at Amazon states: “Dinesh D'Souza has had a 25-year career as a writer, scholar, and public intellectual.” I don’t think so. “Writer,” yes. “Polemicist” would also be accurate. “Scholar” – not so much. You cannot misrepresent someone’s clear written work on purpose and call that “scholarship.”

I’m not alone in my view of D’Souza’s probity. Historian Paul Finkelman calls D’Souza’s The End of Racism"a parody of scholarship.” Michael Bérubé, who is an intellectual, says D’Souza’s work “doesn't meet a single known standard for intellectual probity.”[6]And so it goes. And now this menace to scholarship – or even to clear thinking – has been unleashed upon us again, all cleaned up and ready to go.

[2]Another meaning is economic: “the environment of the firm.” Ironically, the field of psychometrics itself uses “environment” in yet another way, to mean “all factors other than genetic inheritance.” Still other uses occur in computer science, music, and other fields.