"War Hath No Fury Like a Non-Combatant" – Charles Edward Montague 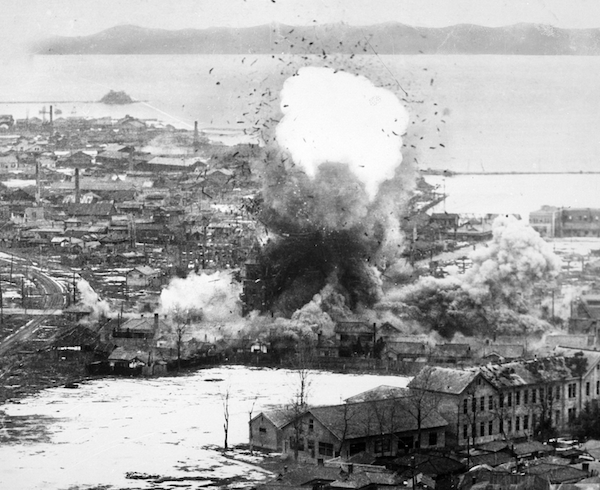 Murray Polner, formerly HNN's senior book review editor, blogs at There's No There There. He is the author of No Victory Parades: The Return of the Vietnam Veteran, Branch Rickey: A Biography, and co-editor of We Who Dared Say No To War.

These are the words a grieving father wrote Truman during the Korean War:  "Mr. Truman, As you have been directly responsible for the loss of our son's life in Korea, you might just as well keep this emblem [his son's Purple Heart] on display in your trophy room, as a memory of one of your historic deeds. … 0ur major regret at this time is that your daughter was not there to receive the same treatment as our son received in Korea." (Atlantic Monthly, May 2018)

The Cold War: A World History, a new book by historian Odd Arne Westad, concluded that Korea War was "perhaps one of the biggest calamities of the Cold War," while "Its direct consequences are with us today.... Worst of all, it was an entirely avoidable war, created by the intensity of ideological conflict among Koreans and a Cold War framework that enabled Superpower interventions."

Congress in 1950, was, as usual, paralyzed, the mass media virtually all pro-war, and  Truman, intimidated by the "Who Lost China" hysteria of the era  and fear of Russia, devastated  by WWII,  took the nation into a conflict which wasted the lives of some 37,000 Americans and a few million Koreans in a conflict neither he nor they ever understood.

The Cold War gave birth to the deceptive Domino Theory, which identified anyone on the Left as Moscow's puppets, a fiction which was accepted as the holy writ by most Americans at home and abroad. Its tally of deaths since 1945 has far surpassed the numbers killed in wars by Russian, Chinese and North Korean tyrants. Now, 200,000 American military are stationed worldwide at 800 bases and 26,000 troops are in combat zones, ready to fight  our latest authorized "enemies."

The ousting of Iran's democratically-elected President Mohammed Mossadegh in 1954  by the oil-and profit-mad British and the CIA's "intelligence community" frantically eyeing post-Stalin Russia, is a large reason for the ensuing Middle Eastern chaos, now  complicated by Netanyahu's exaggerations and fictions about Iranian threats while hoping to involve  U.S. troops in any coming conflict. And after being mired in intricate Middle Eastern cultural, religious and sectarian civil wars, all the rivals have become victims of their own fantasies and propaganda.

Earlier, wars in Angola, Cuba and Latin America and later ones in Ukraine and elsewhere trace their origins and motivations to the "Russians Are Coming" syndrome, which remains popular among western capitals as long as Americans are willing to send their kids to fight and die for them. After the collapse of Communism in 1991, reconciliation and equal and peaceful relations were rarely on many western agendas When the Warsaw Pact shut down, for example,  NATO and the European Union  "survived, expanded, and continued blindly to behave as if the rule of the Cold War that had formed them still applies," wisely commented Neil Ascherson  (May 24, 2018, New York Review of Books). The U.S. and its NATO sycophants rejected Gorbachev's offer of a live and let live policy.

The National Security Archive, which specializes in publishing declassified documents, reported "NATO's Expansion: What Gorbachev Heard": "Washington D.C. September 12, 2017- U.S. Secretary of State James Baker's famous ‘not one inch eastward’ assurance abut NATO's expansion in his meeting with Soviet leader Mikhail Gorbachev on February 9, 1990, was part of a cascade of assurances about Soviet security given by western leaders to Gorbachev and other Soviet officials throughout the process of German unification in 1990 and on into 1991 according to declassified U.S., Soviet, German, British and French documents posted by the National Security Archive at George Washington University."

The "assurances" were never honored.

Edward Pessen’s prescient 1995 book, Losing Our Souls or Why the New Cold War Will be Worse Than the Old Cold War, offered a new generation of Americans a few lessons, which have been predictably overlooked.

As Pessen wrote, our actions during the first Cold War were designed to carry out "sabotage, demolition, assassination and out and out warfare," not to mention countless instances of meddling in other nations' elections and forms of government. (Sound familiar?)

"The most baneful effect of our anti-Soviet policy is the unprecedented insecurity it brought to the U.S.," wrote Pessen. "For the first time in the nation's history it could be almost destroyed and most of it killed in a matter of minutes by weapons against which we have no effective defense."

So much for the Land of the Free and the Home of the Brave. and the former Worker's Paradise.

"Time to calm down, America. Whatever RussiaGate (and the Greater Middle East) ultimately turns out to be, it won't be anything that's worth a single drop of American or Russian blood,” or anyone else’s.  Who said this?  Thomas L. Knapp, a sane voice about whom you've probably never heard.