"Kill Jpan" or My High School Life During WWII


by There's No There There tags: WWII; Tilden HS; FDR 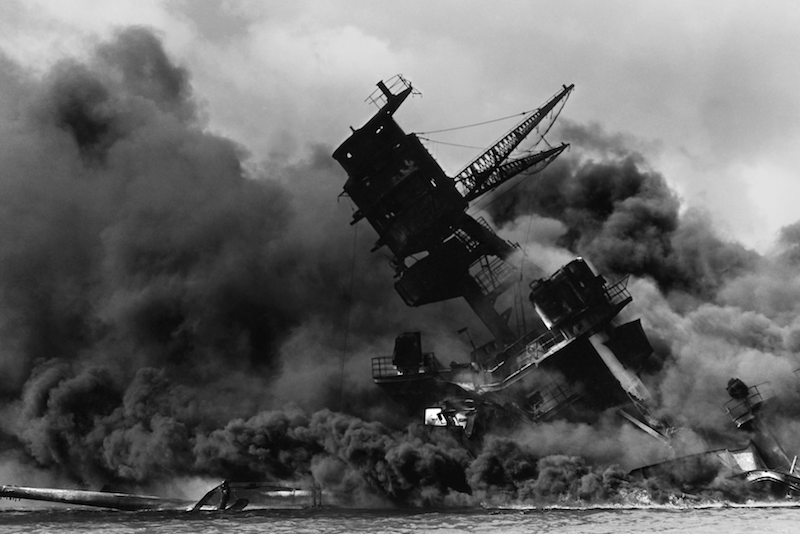 USS Arizona during the attack

Post by Murray Polner, the author of No Victory Parades: The Return of the Vietnam Veteran, Branch Rickey: A Biography, and co-editor of We Who Dared Say No To War.

On the morning of December 8, 194, my 8th grade pal Marvin, livid at what the Japanese "rats" has done to his country in a place he had never before heard of, carried a can of black paint and a brush to the sidewalk in front of Gibalovitz's pharmacy on Herzl Street in Brooklyn's Brownsville neighborhood and inscribed his immortal if ephemeral fighting words: "Kill Jpan."

We both attended P.S. 165 in Brownsville, an overwhelmingly Jewish neighborhood not far from Irish Flatbush, Italian Canarsie and Ocean Hill and a scattering of blacks living in shabby tenements. If Marvin couldn't spell he was nonetheless on to something. We were on our way to high school. It was 1942, the war was on, and by the time we graduated four years later, older neighborhood boys  like Irving Starr, whose family owned a delicatessen, had died somewhere over the Ploesti oilfields in Romania and Phil Drazen, the son of our grocery store owner as well as a 19 year old rifleman who lived new door to us, were dead somewhere in Europe. My sister's husband was drafted and spent four years on the lookout for Japanese planes. Moe, the only non-Jew I knew in the neighborhood, managed to get home but his body and mind were shattered forever.

I cared, I guess, when I heard the radio reports of death and devastation. And my father never forgot that he had been a combat veteran of WWI's Tsarist army who deserted after the Revolution and was later shanghaied by an anti-Semitic band of White renegades under General Kornilov, who forced him to fight on their side during the devastating, if largely unknown, 1918-21 civil wars when Reds, Whites, Poles and Ukrainians tried to kill each other and their civilians, until he again deserted.  Still, during the four years I was in Samuel J. Tilden High School, like my classmates, I was more or less oblivious to the fighting and killing. I acted in plays including a musical. I was on the football team and a school newspaper editor. I may be wrong, but I can't recall a single article any of us wrote in Tilden Topics about the war or politics.  It's not that war wasn't discussed in my home. After all, we were Jewish and deeply concerned about relatives still left behind after Operation Barbarossa, when the Wehrmacht stormed into Russia and people like my father's younger sister and her family were killed and his parents and niece fled for their lives to Kazakhstan.

But the war insisted on intruding into our rather innocent, sheltered lives of ball playing, girl-chasing and indifference. People like Gunther would suddenly appear. Short, muscular, curly-haired, he and his mother had somehow escaped from Europe – Germany to France-to-Latin America – after his father was taken by the Nazis. But once here, never another word from him or us. One of our Irish Catholic bachelor women teachers tried to get him to share his experiences, but Gunther refused, even objecting to his mother showing up on Open School Week. So the silence continued.

Quite unknown to us, we were unconsciously preparing for our future. Eugene would become an air force officer, Jerry a school principal, Marty a musician, Norm a businessman, Milt a state trooper, and most of us, me included, were eventually drafted. I never saw Gunther or Marvin again though another boy, a running back who played on our winless football team, told me years after that I was the only one on the team who ever read a book.

But above all we were unquestioning patriots, like Marvin. We trusted our government, our politicians and our leaders. Whenever the Movietone Newsreel would show a U.S. naval ship on the screen of our local movie theater situated  close by the entrance to the Saratoga Avenue IRT EL and a few years earlier the hangout for our local mobsters and murderers, we'd stand, reverently, and cheer; a few even saluted. We collected metal products and left them at curbside so someone somewhere would melt it down and turn it into more weapons to kill Marvin's "rats." I joined the Air Raid Wardens as a Messenger, proudly wearing a white helmet and a blue arm band and loved running down the streets yelling for people to shut their lights because I imagined the Luftwaffe was heading for us. One older woman refused. "How else I can see the blackout?" she yelled back.

One rainy Saturday morning in October 1944, I watched an obviously frail FDR wearing a black cloak being driven down Pitkin Avenue in an open car on his way to Ebbets Field to speak. Everyone I knew adored FDR though when I dared say to my friends that Wendell Willkie, his Republican rival, wasn't a bad guy (though I changed my mind when he supported conscription) they took turns punching me. Mr. Miller, who lived across the street in an apartment house and was the local Democratic Party's top man, hurled invectives at anyone not in love with FDR. A man once screamed at me because I was not in uniform fighting FDR's war. His son, he shouted, was in the army. Why wasn't I too? "I'm only 15, mister," I screamed back and he advised me to do something to myself physically impossible.

There were few dissenters; the Communists were our pals until the Cold War split the two erstwhile allies. The Japanese, alleged subversives, were interned in camps scattered through the western deserts. And the Democratic loyalists, virtually none of whom said anything about 100,000 Japanese-American citizens imprisoned behind FDR's barbed wires, were out every Election Day eve speaking on Saratoga and Pitkin avenues for every party but the Republicans (the only Republican I ever knew was a lawyer, a perennial losing candidate for a congressional seat, whose office beneath my friends' parents' dress store drew lots of tenants suing their landlords).

After I graduated, the Cold War and the anti-Red crusade began to take its toll, on America and Tilden HS. My apolitical sister told me that her favorite high school typing-steno teacher had been fired from Tilden by the NYC Board of Education. Why she didn't know. I also I heard that her fired teacher's Marine son had been killed on Guadalcanal during the war and also that our school's teacher of Spanish, the comedian Sam Levinson, who had named his son in honor of the fired teacher's dead Marine son and also wrote a humor column for a left-wing newspaper came close to being "exposed" by one of the for-profit rags that earned its dirty keep by outing Communists and left-leaning liberals. Later I heard allegations that he had taken the smart way out and paid them some money so he could be "cleared" and allowed to continue teaching, writing and of course telling very funny jokes.

Another of my favorite high school teachers  – whose name I've sadly forgotten  – was kicked out for his political views, which I never heard him express in my social studies classroom. I did hear rumors that he took a job delivering milk to support his family. Anyway, by the time I graduated, the war was over.