Blogs > There's No There There > Blacklists 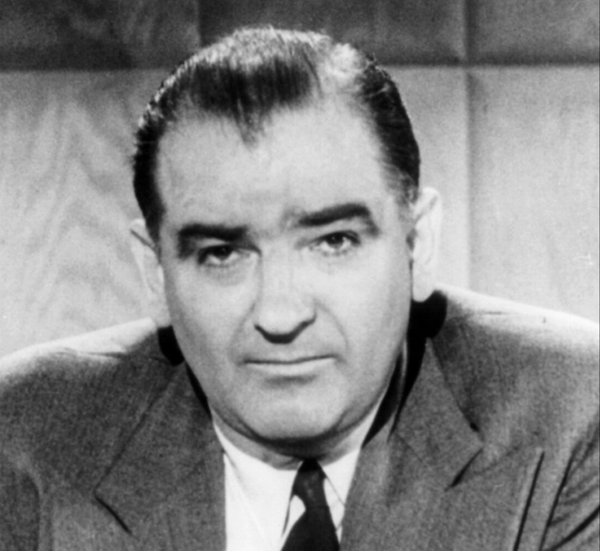 I remember my older apolitical sister telling the family that her favorite high school typing- steno teacher had been fired. Why, she didn't know.

Years later I learned that the fired teacher's Marine son had been killed on Guadalcanal.  In the same high school my teacher of Spanish, the comedian Sam Levinson, had named his son in honor of the typing-steno teacher's dead son. Levinson was a moonlighter and wrote a column for a left-wing newspaper and came close to losing his day job after he was "exposed" by one of the for-profit rags that outed Communists, party and non-party, and all sorts of left-leaning liberals.  He took the smart way out. I was told he paid them off so he could be "cleared" and allowed to continue teaching and telling jokes.

Yet another of our teachers was kicked out for his political views, which, incidentally, I never heard him express in my social studies classroom.  I did hear rumors later that he had become a milkman to support his family.

All this--and much more--happened because the Cold War had arrived soon after Germany surrendered. It was a new postwar anti-Red world and the NYC Board of Education caved before unrelenting pressure brought by extreme rightists, unctuous and opportunistic politicians and local Hearst-owned papers. Firing experienced leftist teachers was their specialty.

"Samuel Pines, noted mathematician and physicist, a victim of the McCarthy blacklist, whose names and reputation were cleared by the defense department after a precedent -setting legal struggle in 1955."

I had never heard of Samuel Pines but his attempt to save himself and his reputation suggested the concomitant rise of a scurrilous and innovative network egged on by Hoover's FBI, HUAC  and its copycats (e.g., the avenging Tenney Committee in California, which demanded college faculty members sign loyalty oaths) and an army of ex-Communists who apparently needed money and favorable publicity.

People like Harvey Matusow, who did fairly well financially after naming more than 200 people as Reds or sympathizers in the early 1950s only to recant and later admit he lied in every instance.

Or Martin Berkeley, an actor on Broadway and later a screenwriter, a former Communist Party member, who presented HUAC with more than one hundred names.

"In Hollywood during the HUAC days, friend became afraid of friend," wrote Victor Navasky in his seminal 1980 book "Naming Names," adding "The  free-floating guilt that was in the air visited the innocent--Communist and non-Communist alike." Navasky  cited a NY Times piece by reporter Warren Hoge about the travails of the apolitical actress Mildred Dunnock, who played Willie Loman's wife in The Death of a Salesman." It neatly summed up the blacklist's sins. She couldn't find additional work because the right-wing "Red Channels," mentioned her alongside Lillian Hellman, Arthur Miller and Elia Kazan.

"It gave me an emotional understanding of being accused," said Dunnock. "I felt contaminated. I felt I had leprosy. I felt I had incriminated my husband, a conventional man."

She was not alone. J. Edward Bromberg, a character actor, killed himself after he was named, as did Philip Loeb, Molly Goldberg's TV husband, after he too was named. Bromberg's son, Conrad, remembered, "You didn't know who was for you or against you."

The late Merle Miller, who wrote biographies of  Truman and General Ike, called "Naming Names" a "book about a very dark time in our recent history. While there are those who would like to pretend it never happened, it did, and we must remember it lest we repeat it"-- an appropriate warning for our  times.

Clancy Sigal, a Hollywood  agent, later blacklisted, whose agency's clients included Humphrey Bogart, Rod Steiger, Barbara Stanwyck  and Peter Lorre, also wrote "Going Away," one of the more memorable and striking memoirs  of that anxious era. His new sharp-eyed  book, "Black Sunset: Hollywood Sex, Lies,  Glamour, Betrayal, and Raging Egos" raises central questions about the dirty era of blacklisting: "In this vast cosmology of informers there are exquisite ranks, grades, reason, excuses. Do they voluntarily engage in the destruction of their friends or are they dragged unwilling.... Blackmailed? Do they take pleasure or pain from betraying? The eternal problems of guilt assigned or evaded."

Not many dared defend the victims by challenging the Torquemadas. Far easier to simply accept the judgment of powerful people who can harm you. I remember watching a man and two women asking ordinary passersby to sign their names in favor of the Bill of Rights. It was next to the East NY Savings Bank on Pitkin Avenue in Brooklyn's Brownsville neighborhood. Only one elderly woman signed. But that was understandable given that those were the flowering of the Cold War Consensus years and  fear of a coming nuclear war with  Russia. There certainly were plenty of Russian spies as there were no doubt  plenty of American spooks. But what criminal acts had Bromberg, Loeb, my high school's teachers, and Clancy Sigal, et.al. committed? At most many of the Communists and others were guilty of moral complicity for ignoring Stalin's many crimes.  0r belonging to New Dealish left and labor groups. Or signing petitions. Or voting for Henry Wallace in 1948. Or even worse: John Gregory Dunne, the great stylist and cynic who covered Hollywood for years wrote that the imprisoned Hollywood Ten writers mainly produced--surprise! -- mediocre films. But crimes?

The dread and silence were not broken until the '60s but not before countless numbers of famous people rushed to swear allegiance to The Land of The Free and The Home of the Brave. Like the liberal senators who co-sponsored the "Emergency Detention Act" aimed at sending "subversives" to internment camps during alleged national emergencies.

I just read Spencer Woodman's  "Intercept" article headed "Republican lawmakers in five states propose bills to criminalize peaceful protest. And, too, Frank P. Barrajas's justifiably outraged HNN piece, "Professor, You're Being Watched," describing how he and 200 other professors were named by neo-blacklisters who alleged they "discriminate against conservative students and advance leftist propaganda in the classroom."

So what's next as we enter a new presidential administration where newly-empowered Trump men and women, some apparently seething with rage and bitterness, could go after teachers and professors, liberal actors and screenwriters for saying and writing the wrong things?  Maybe burning their books? Or closing down some opposition newspapers and websites and reinstating loyalty oaths? 0r how about refurbishing some rendition centers in torture-friendly countries?  I don't always agree with conservative NY Times columnist David Brooks but heartily agree with his recent warning about our country: "A mean wind is blowing."