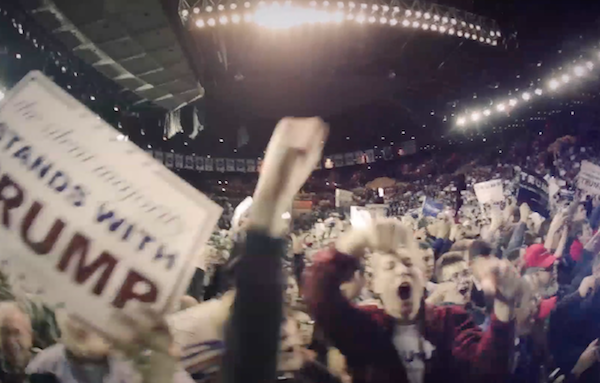 David P. Barash is an evolutionary biologist and professor of psychology at the University of Washington. His most recent book is Out of Eden: surprising consequences of polygamy (Oxford University Press, 2016).

*And by support I mean "succumb."

I’ve already noted – in posts here at the HNN as well as in my most recent, book, Out of Eden: Surprising Consequences of Polygamy – that human beings carry with them undeniable indications of a polygamous heritage. Beyond the more obvious albeit often surprising implications for sexual, parental and aggressive behavior, this fact (and it is so well established that it can indeed be considered a “fact”) also has other, more indirect consequences.

Among these, I suspect, are implications for our political lives, as manifest in “real time” as the 2016 political Presidential campaign develops. I’m thinking especially of the pressure we often feel to “fall in behind” the presumed candidate of our favored party.

I’ve recently been in correspondence with a highly intelligent software engineer who is deeply committed to non-sexist parenting, nonviolence and means of overcoming what he and I see as some of the regrettable legacies of our polygamous – especially polygynous – past. This young man (I’ll call him Josh because, well, that’s his name) is painfully aware of the downsides of “alpha maleness” as well as of the widespread tendency to accept the status, and often the dictates, of such dominant dudes. He suggested to me that there must have been a substantial evolutionary advantage – at least during our Pleistocene childhood – of affiliating with such individuals, presumably greater prospect of protection against common enemies: whether predatory animals or other predatory hominins.

Maybe so. But I suspect that no less important than enhanced safety and security regarding outside threats was the payoff of gaining protection from the threatening, domineering and dangerous alpha dude himself. And that’s where the current election (and to some extent, any election) reveals a whiff of that ancient pattern: sign on with the leader or risk being left behind. The alpha silverback will remember who was on board and who wasn’t. LBJ was a master at threatening and bullying his fellow Senators, especially those who were shorter than he.

The New York Times of July 8 ran a story – “Some Senators in GOP Feel Trump’s Wrath” – describing an acerbic meeting between what passes for moderate Republican senators these days and the party’s “presumptive nominee,” and which “descended ... into an extraordinary series of acrid exchanges, punctuated by Mr. Trump’s threatening one Republican senator and deriding another as a ‘loser.’ ”

According to the Times, Senator Jeff Flake, of Arizona, “Mr. Flake, of Arizona, told him that he wanted to support Mr. Trump, but could not because of Mr. Trump’s statements about Mexican-Americans and attacks on a federal judge over his Hispanic descent. Mr. Trump responded by saying that he had been going easy on Mr. Flake so far, but that he would ensure that Mr. Flake lost his re-election bid this year if the senator did not change his tune. Dumbstruck, Mr. Flake informed Mr. Trump that he was not up for re-election this year…. Mr. Trump even aimed vitriol at a senator who did not show up, according to people who attended the meeting: Senator Mark S. Kirk of Illinois, who recently withdrew his support for Mr. Trump. Mr. Trump called Mr. Kirk ‘dishonest’ and a ‘loser’ and suggested that Mr. Kirk really wanted to support Mr. Trump but was refusing to for political reasons, the attendees said. Mr. Kirk is among the most embattled incumbent Republican senators seeking re-election in November.”

Swear allegiance to the dominant alpha leader or risk reprisal: Its a call that our genes have long known and to which they have nearly always succumbed, if only because those that didn’t were less likely to have a future, whether social, political or biological.