David P. Barash is an evolutionary biologist and professor of psychology at the University of Washington; his most recent book is Out of Eden: surprising consequences of polygamy (2016, Oxford University Press).

The evidence is undeniable. If a Martian zoologist were to visit Earth, he or she – or it – would conclude that the species Homo sapiens is somewhat polygynous (partaking of a mating system in which one male mates with more than one female). At the same time, and if our Martian looked hard enough, it would also be apparent that – paradoxically – we are also somewhat polyandrous: the mating system in which one female mates with more than one male. This does not mean, incidentally, that human beings were, or currently are, wildly promiscuous, despite the nonsensical assertions of at least one widely read book of pseudo-science (Sex at Dawn). Rather, as a species, we show the characteristic imprint of polygamy: which includes both polygyny (the more obviously manifested mating system), as well as polyandry (more subtly demonstrated, but no less real). 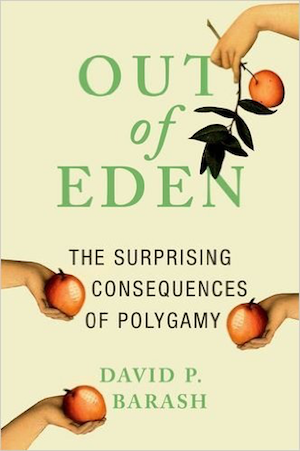 In subsequent posts, I’ll develop some of the most cogent evidence for our simultaneous polygyny plus polyandry – i.e., polygamy in the broadest sense.  But for now, I want to focus on a fascinating and as yet unanswered question, especially suitable for historians to ponder. Given that monogamy is not “natural” to human beings, why is it currently so widespread? (Note: the fact that monogamy isn’t natural doesn’t mean that it isn’t possible or even desirable; I argue that some of the best things about human beings are revealed when we do things that are difficult, and that don’t come easily, such as learning to play the violin ... or, perhaps, being monogamous. But that’s another topic.)

For now, I want to focus on why monogamy has become so popular, at least in the modern Western world, and at least in theory, if not always in practice. Although monogamy is exceedingly rare in the animal world, it is found in a few cases, and nearly always, the payoff seems to be associated with the adaptive benefit of biparental childcare, something that Homo sapiens finds especially beneficial, given that we are unusual in that our offspring are profoundly helpless at birth, remaining needy for an extraordinarily long time.  Nor is it absolutely necessary that the cooperating adults be man and woman; we know from abundant sociological data that two women or two men can do an excellent job, and that when it comes to child rearing, two – of any sex – are better than one. But we also know that prior to the cultural homogenization that followed European colonialism, more than 83% of human societies were preferentially polygamous, and that polygamy was also prominent in the ancient Near East from which that presumed Western move to monogamy originated.

So my question for now is: why did such a large segment of human society switch from polygamy to monogamy? And my first answer is: at present, we don’t know. My second answer is a guess, which goes as follows. (I propose it simply as a hypothesis, in the hope that readers will not only find it interesting but also useful in generating informed discussion and, if possible, meaningful research.)

Imagine a polygynous society with an average harem size of, say, ten. This means that for every male harem-keeper, there are nine unsuccessful, sexually and reproductively frustrated, resentful bachelors. The simply reality is that polygyny is disadvantageous not only for women – for complex reasons – but even more so for men, since with a 50/50 sex ratio, there are unmated men in proportion as polygyny obtains. This, btw, runs counter to the lascivious imaginings of many men, who, when I describe the evidence for primitive human polygyny, often express regret that they weren’t alive in those days, imagining that they would be a happy harem-holder. This is actually rather comical, analogous to those charlatans who claim to remember their past lives, when they were Napoleon, or Tutankhamen, or perhaps Cleopatra or Catherine the Great ... whereas the overwhelming statistical likelihood is that they would have been some poor boob who froze to death on the Russian steppe, or an equally unknown laborer who struggled to construct a pyramid.

In short, whatever its benefits when it comes to child-rearing, monogamy is a great democratizing institution, enabling men to have a wife and a chance at a family, the great majority of whom would otherwise be left out.  The hypothesis thus goes that Western society in particular inculcated monogamy as a trade-off, whereby powerful men essentially agreed to forego the obvious trappings of polygyny in return for a degree of social peace and harmony. Monogamy is part of our egalitarian ethos, and for good reason. Consider the contribution that socio-sexual frustration has apparently made to unrest in the Arab world, where limited economic opportunities has contributed to limited mating opportunities. Similarly, look at the situation of modern China, where an excess of men seems poised to generate its own (currently unpredictable) disorder.

There is much more to be said about polygamy (polyandry no less than polygyny) and its consequences, some of which are obvious – such as the overwhelming preponderance of male-based over female-based violence – and others (such as implications for sexual preferences, parenting styles, why women conceal their ovulation, and maybe even homosexuality, genius and monotheism) are more obscure.

But for starters, we might ask ourselves what historical process (somewhat distinct from, although linked to our biology) gave rise to the widespread social bias toward monogamy in the modern world. If someone has other ideas, I’d be eager to hear them.