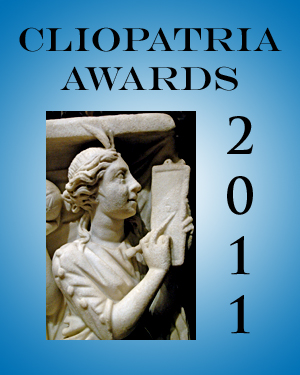 The Cliopatria Awards recognize the best history writing in the blogosphere. There will be awards in eight categories:

Cliopatria, as host of the awards, is ineligible for the"Best Group Blog" category. Individual judges are ineligible for nomination in their respective categories, but may be nominated for other awards. Judges may also make nominations in other categories.

Bloggers, blogs and posts may be nominated in multiple categories. Individuals may nominate any number of specific blogs, bloggers or posts, even in a single category, as long as the nominations include all the necessary information (names, titles, URLs, etc).

Nominations will be open through November; judges will make the final determinations in December. The winners will be announced at the American Historical Association Annual Meeting in early January 2011; winners will be listed on HNN and earn the right to display the appropriate Cliopatria Award Logo on their blog.

Previous winners can be seen here.