Will the United States Accept Responsibility to Lead with a New Marshall Plan for Climate? 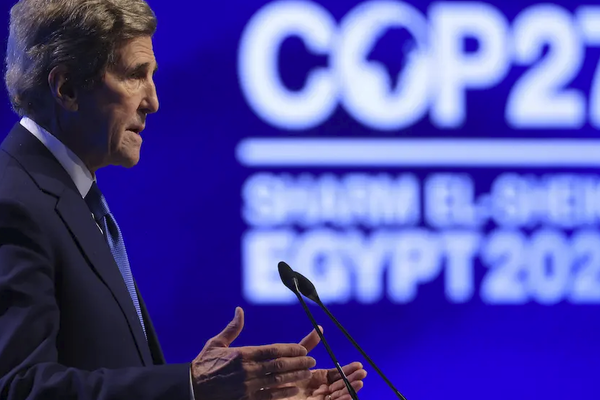 In talks leading up to COP (Council of Parties) 27, the international climate summit held at Sharm al Sheik in Egypt in late November, John Kerry, President Biden’s envoy, was adamant that the U.S. did not feel “guilty” about its environmental record and would not agree to contribute to a “loss and damage” fund for developing countries.

The proposed loss and damage fund is considered by many developing countries as money owed to them by wealthier nations, particularly the U.S., Canada and the Europe, which have contributed the largest amount of carbon emissions.

Kerry was upholding a longstanding U.S. position that while it will cooperate in addressing the challenges of global warming going forward, including subsidizing new technology and paying for “adaptation” in impacted countries, it was not willing to accept liability for its past record of carbon emissions.

The U.S. made its position clear at the very first U.N. sponsored global climate summer in Rio de Janeiro in 1992, when President George H.W. Bush told the delegates “I’m not here to apologize.”

At the 2015 Paris summit, the lead Obama Administration negotiator, Todd Stern, stated, “There’s one thing we won’t accept … that is the notion that there should be liability and compensation for loss and damage. That’s a line that we can’t cross. And I think in that regard we are in the exact same place…with virtually all developed countries.”

After his election in 2016, President Donald Trump claimed global warming was a “hoax,” and dropped out of the 2015 Paris Accords, the agreements made to reduce carbon emissions going forward. President Biden rejoined the agreement in 2021.

For the U.S. government, the question of accepting “historic liability” for past actions opens up the possibility of being assessed millions, possibly billions, of dollars for a new fund. One estimate for historic damages is $300-700 billion per year. This fund would reimburse developing nations for the damages they are encountering (e.g. rising seas, droughts) caused by global warming.

This concept is variously called “a loss and damage fund” and sometimes “climate reparations.”  Some climate activist groups claim that a climate reparations fund should include damages from CO2 emissions, African slavery, colonialism and early, unfair trade practices. Only then, they assert, would social justice and equity be achieved.

In the United States, reparations for descendants of slavery, a separate but closely related concept, is a highly controversial question, although one state, California, and several cities including Detroit and Amherst, Mass. have established groups to examine possible funds.

Kerry, despite his earlier protestations, bowed to pressure from a coalition of developing nations, including the Alliance of Small Island Nations, in the last hours of the COP 27 conference and agreed that the U.S. would contribute to a new loss and damage fund, although no formula for assessing payments was agreed upon.

Loss and Damage Without Guilt

Does the new acceptance of a loss and damage fund mean the U.S. will eventually agree to climate reparations? Was this the admission of “guilt” that Secretary Kerry had worried about?

In his official post-conference statement, Kerry was careful to  avoid any mention of historic liability or reparations.  Instead, he referred to an agreement on “funding arrangements related to loss and damage” that would be part of a broader “mosaic” of responses.  He said that major financing for new climate initiatives could come from “multilateral development banks” (e.g. the World Bank), corporate investments in clean energy technology and private foundations including the Rockefeller Fund and the Bezos Earth Fund.

Kerry also highlighted the recently passed Inflation Reduction Act, which he said “puts the United States firmly on track to meeting our ambitious goal of reducing emissions 50 to 52 percent below 2005 levels in 2030. What’s more, our historic investments in clean energy will help (other) countries by driving down the cost of clean technologies everywhere.”

While the U.S. agreement to contribute indirectly to a loss and damage fund allowed host nation Egypt to claim a diplomatic victory, it left several activist groups bitterly disappointed. They criticized the new fund as being too vague and lacking accountability.

Greenpeace’s chief delegate to the talks, Yeb Saño, complained that “Rich countries are rich for a reason, and that reason is injustice. All the talk of deadlines and complexities about loss and damage is just code for climate delay.”

Another activist group, Global Witness, voiced a similar concern, claiming climate reparations are necessary “to right historical injustices as well as to prevent them from occurring again in the future.”

How should the U.S. respond? Should Americans add “climate damage” to a long list of other sins to feel guilty about including racial discrimination, income inequality, costly foreign wars and global domination of tech industries?

To put America’s carbon emissions in context consider these facts:

●   Since 1850, China has emitted 284 billion tons of CO2, according to an analysis by Carbon Brief, a UK-based organization. The US, on the other hand, industrialized decades earlier and has released 509 billion tons of CO2 – twice as much. China, however, will overtake the U.S. in total historic emissions by 2040 unless it drastically cuts CO2 releases from current levels.

Up until the COP 27 conference, China has claimed that it was a developing country and should receive loss and damage funds, not contribute to them. Kerry hinted that China may drop that position and may agree to contribute in the future.

American taxpayers are unlikely to respond positively to the concept of paying for past damages.  Already Republican leaders have criticized the new agreement.

Senator John Barrasso (R-Wyoming) has denounced the fund saying “Sending U.S. taxpayer dollars to a U.N. sponsored green slush fund is completely misguided. The Biden administration should focus on lowering spending at home, not shipping money to the U.N. for new climate deals. Innovation, not reparations, is key to fighting climate change.”

A huge, unsettled question after COP 27 is how any dollar amount for damages would be calculated. Right now, many environmental activists are suggesting the formula be historic carbon emissions = compensation the U.S owes now.

But would this be fair or achieve “social justice?” Simply tallying tons of carbon ignores a century of foreign aid payments and other sacrifices made by the American people to insure a stable, liberal world order based upon free trade and democratic values.

What if the Soviet Union had prevailed in the Cold War? The 192 nations of the world would not be voluntarily meeting at a conference that included activist groups and was based upon free speech the settling of differences with a series of democratic votes.

If large parts of the world were today under totalitarian control, the scientific facts of global warming would be suppressed altogether, or selected information would be used by the authoritarian state to impose more controls on its population. For a current example, we can look to China, and its secrecy around COVID’s origins, its extensive lockdowns of its own population and blaming of “foreign actors” for the whole crisis.

The timing of the very first U.N. conference on climate change and sustainable development illustrates the importance of a U.S.-enabled, stable world order. That first conference was held in June 1992 in Rio de Janeiro, just six months after the collapse of the Soviet Union. With the end of a tense rivalry between the communist world and the western allies, the possibility of worldwide effort to address climate change was suddenly possible.

The U.S. did burn a lot of fossil fuels as it grew into the world’s largest economy, but it has also been generous in supporting countries in distress. It took on a great responsibility in 1948 with its adoption of the Marshall Plan. This bipartisan program provided more than $90 billion in today’s dollars from 1947-53 to European counties devastated by WW II.

Winston Churchill later wrote that this was “the most unsordid act in the history of any nation.”

The success of that plan paved the way for other initiatives funded by U.S. taxpayers. President Kennedy launched the Peace Corps and also the USAID program, which has provided some $80 billion in assistance since 1961.

U.S. foreign assistance has, in large part, been very successful. Eleven of 15 of the U.S. top trading partners today were once recipients of U.S. aid, including South Korea, Costa Rica, Chile and Brazil.

If a climate reparation fund is ever established, wouldn’t it be fair to take this record of foreign aid into account?

Global warming is already upon us. There is strong scientific consensus on the disastrous effects if we keep on the current path of dangerously high carbon emissions. But there is also good news among the current gloomy forecasts. Clean energy, mostly wind and solar, is now often cheaper than fossil fuels.  The London School of Economics recently reported that scientists have recently made major progress in carbon capture, nuclear fusion and hydrogen fuel.

Changes in government policy are more acceptable if they appeal to humanity’s need for optimism, rather than guilty scolding for past mistakes. President John F Kennedy, in a June 1963 speech, just months after negotiating an end to the Cuban Missile Crisis, sounded a note of optimism about the future. He said, “Our problems are manmade--therefore, they can be solved by man. Man's reason and spirit have often solved the seemingly unsolvable--and we believe they can do it again.”