Does Disqualifying a January 6 Participant from Office Threaten Democracy? 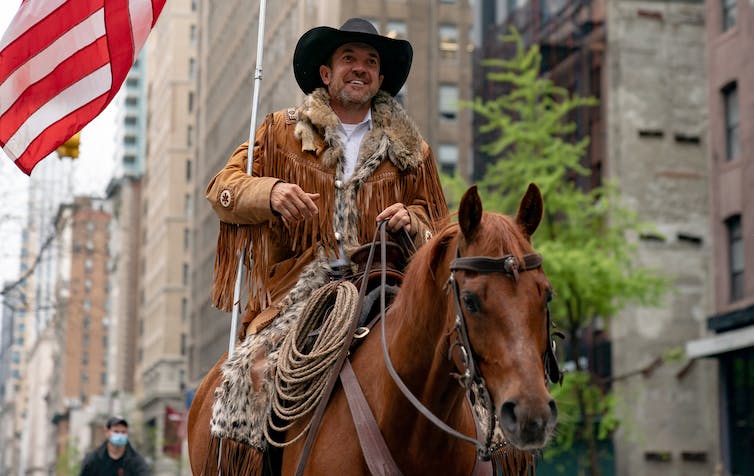 A county court in Santa Fe, New Mexico, on Sept. 6, 2022, became the first in more than 150 years to disqualify a person from public office because they participated in an insurrection.

District Court Judge Francis Mathew found that Couy Griffin, a former county commissioner and founder of the group Cowboys for Trump, had participated in the violent U.S. Capitol attack on Jan. 6, 2021. Mathew invoked a nearly forgotten part of the 14th Amendment, called Section 3, which can disqualify certain people from state or federal office if they have “engaged in insurrection or rebellion” or given “aid or comfort” to the United States’ enemies.

The clause was first adopted after the Civil War to keep former Confederates from participating in politics. The amendment says that disqualified people are barred for life from either running for or being appointed to office. But Congress can vote by a two-thirds majority to waive this ban.

The clause fell into general disuse after 1872, when Congress gave amnesty to most former Confederates in a move toward reconciliation.

Some observers have argued that Section 3 disqualification should be dusted off to address the Jan. 6 mob and to stop other people who have threatened and committed violence – or tried to disrupt federal elections – from serving in government.

Mathew’s decision has also renewed talk among Democrats and good-governance groups about finding a way to use Section 3 against former President Donald Trump in order to disqualify him from ever holding office again.

We are scholars of comparative constitutional law who have worked on democratic backsliding around the world. In a forthcoming article, we point out that disqualification is potentially a useful tool to protect democracy, but it can also be dangerous – it rubs up against the basic idea of democracy as a system in which anyone can run, and voters can decide. 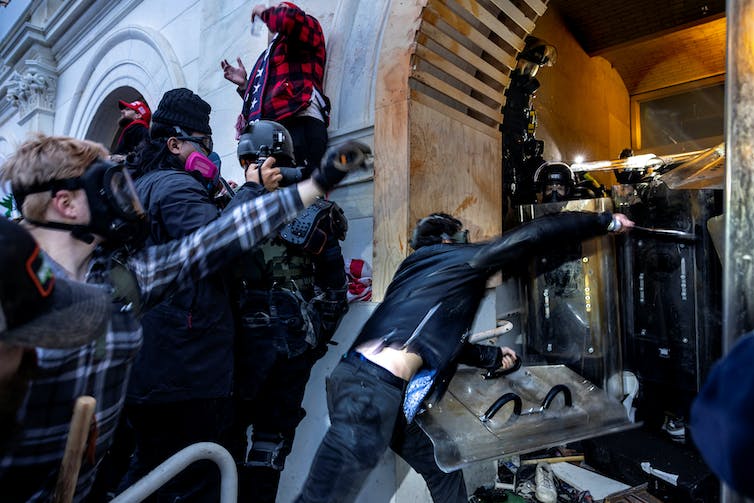 The disqualification of Couy Griffin is one of the latest efforts – but the only successful one – to remove people from office or prevent them from running because of their support for the Jan. 6 Capitol attacks. Brent Stirton/Getty Images

The disqualification of Griffin is one of several efforts voters and advocacy groups have lobbied for after Jan. 6. Most of these efforts have failed to remove someone from office or prevent them from running. But the examples are still useful in understanding how disqualification might be an alternative to more punitive criminal law options.

A suit filed by a group of voters to disqualify Rep. Marjorie Taylor Greene, for example, foundered in July when a Georgia court affirmed a lower court ruling that she had not “engaged in insurrection.”

Arizona and Wisconsin state judges have also rejected efforts to use Section 3 as a sword against those who supported the Jan. 6 insurrection. But none of these targets actually participated in the mob at the Capitol. Mere support of the rioters, or questioning the election outcome, is protected political speech under the First Amendment.

Griffin, though, engaged in a physical invasion of the Capitol.

Mathew’s careful opinion contains extensive factual findings and legal analysis. So it tees up nicely the question of whether and how disqualification from democratic office is legitimate, justified or effective in defense of democracy.

This is especially important in the U.S., where there is a lack of recent historical experience with disqualification of people working in politics.

Other countries make much more extensive use of political disqualification than the U.S. does, as we show in our forthcoming study.

Israel’s courts, for example, have repeatedly disqualified candidates for lack of “good character.” In Pakistan, the supreme court disqualified sitting Prime Minister Nawaz Sharif in 2017 after he was named in the Panama Papers because of corruption.

Democracies require robust protections for free speech and association. But these freedoms can be abused by those seeking to undermine democracy itself.

For example, Mathew documents Griffin’s persistent efforts to cast doubt on the legitimate outcome of the 2020 election and to instigate violence to derail President Joe Biden’s inauguration. Most of Griffin’s actions, however, fell far short of the threshold necessary to justify criminal penalties for incitement – the First Amendment requires that the violence be imminent.

Griffin, nonetheless, participated in a concerted threat to American democracy. Disqualification is a way to address such threats without the heavy hand of the criminal law.

Section 3, more generally, is another way to address high-level misconduct in politics. As we have explored in another study published in 2021, Congress has rarely impeached a U.S. president – and an impeached president has never actually been removed from office. Given partisan dynamics, it is unclear if impeachment could actually remove and disqualify a sitting president.

The risks of disqualification

Mathew’s opinion suggests that Section 3’s “aid and comfort” language can go uncomfortably far. It could potentially chill legitimate political speech – including criticism of the government, or support for a foreign power – that doesn’t threaten democracy.

For example, plaintiffs justified the need to disqualify Griffin by saying that he committed “actions that normalized and incited violence” by “dehumanizing the opposition as ‘wicked’ and ‘vile.’”

Dehumanizing speech about political opponents is indeed often unhealthy for democratic practice, but it has become routine in politics.

Another challenge is that the text for Section 3 is not entirely clear about how disqualification actually works. Does it apply automatically to anyone who engages in insurrection? Or does it require some sort of either judicial or legislative process?

There is no settled answer.

In an 1869 decision, Supreme Court Chief Justice Salmon Chase suggested that Section 3 did not apply automatically – rather, disqualification occurred when Congress, or perhaps a state legislature, authorized it.

Mathew rejected the position that only Congress could make the determination and instead held that Griffin could be disqualified by order of a state court.

The potential breadth and ambiguity of Section 3 creates a risk that the measure could be repurposed, against its original aims, in a way that hurts democracy. 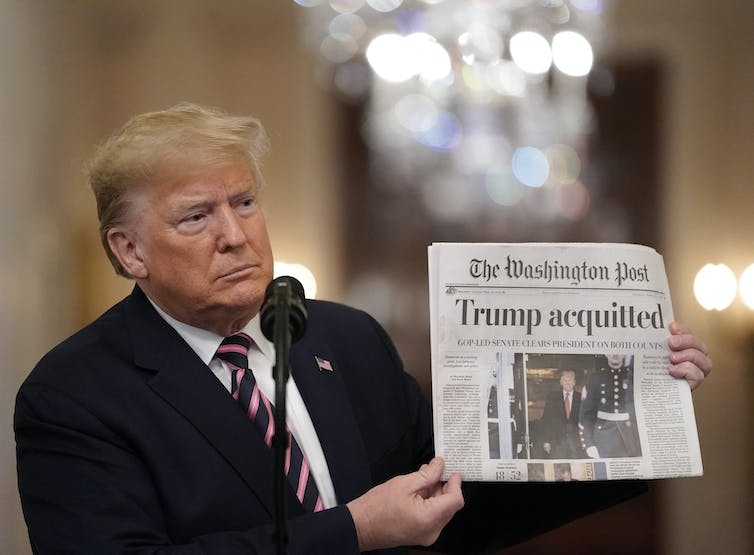 While a few presidents have been impeached, including Donald Trump twice, they were not removed from office. Drew Angerer/Getty Images

Disqualification, then, is a superficial remedy to a profound problem. It might be effective against a low-level official like Griffin, but the bigger the target, the less power everyday voters have.

Imagine that some court was persuaded to disqualify Trump from a state’s 2024 presidential ballot. Such a move could be considered to disenfranchise his supporters. This could play into Trump’s beliefs that the “game is rigged.”

Whatever the correct legal answer, there is a strong case for eliminating the uncertainty around how Section 3 works. We’ve argued for a carefully crafted federal statute that clearly explains when it applies and how it works.

If disqualification is to become an effective sword to defend democratic politics, it must not become a two-edged one that later weakens the democratic process in the U.S.