Can the US Credibly Condemn Russian Attacks on Civilians?

Paul W. Lovinger, of San Francisco, is a journalist, author, editor, and founder of the War and Law League. Contact www.warandlaw.org. 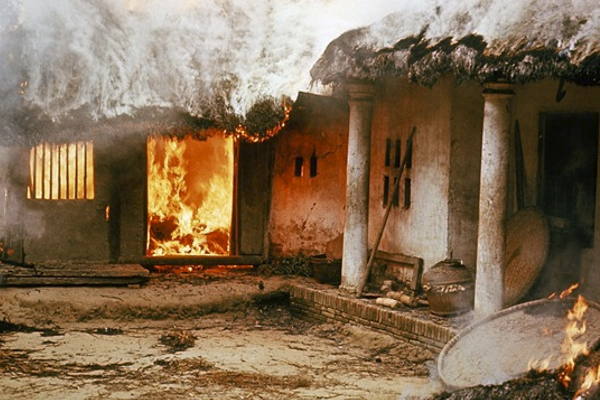 President Biden and his Secretaries of State and Defense have all condemned Russian attacks on civilians in Ukraine.

Before the Ukraine war took over public attention, the issue of civilian casualties in recent U.S. actions in the Mideast became major news. The reliability of official statements had been questioned in press conferences.

The issue was not novel. Fifteen years ago, CBS’s “60 Minutes” ran a sequence on the slaying of civilians by the U.S. military.

The TV program showed that innumerable civilian fatalities were not “accidents,” contrary to published reports. Rather, the military had made calculated attacks on innocent people in hopes of hitting a few “bad guys.” When raids were not calculated, commanders decided if they were worth the cost in civilian lives.

“There’s this macabre kind of calculus that the military goes through on every air strike, where they try to figure out how many dead civilians is a dead bad guy worth,” Garlasco told interviewer Scott Pelley on CBS.

“Our number was 30. So, for example … if you’re gonna kill up to 29 people in a strike against Saddam Hussein, that’s not a problem. But once you hit that number 30, we actually had to go to either President [George W.] Bush or Secretary of Defense Rumsfeld” (for permission).

Garlasco said he recommended 50 “high value” targets. None got hit, only “a couple of hundred civilians at least.” (He worked at the Pentagon seven years, joining Human Rights Watch in 2003, later advising UN agencies.)

Pelley queried Air Force Col. Gary Crowder, deputy director of the Combined Air Operations Center, for Afghanistan and Iraq: “Two men with AK-47s run into a house. Do you bomb the house?” Crowder: “In some circumstances we will bomb the house.” The ground commander decides if it’s “worth the cost.”

In December 2017 Garlasco wrote that bombing was taking massive civilian tolls. Example: attacking a Mosul sniper doomed 105 civilians. The military was “more tolerant of killing civilians,” no longer finding it strategically beneficial to protect them. (The Trump Administration had taken over in January 2017.)

While seeking zero tolerance for civilian killings, he realized they “will never be zero as long as bombs are dropped” (The obvious solution, though evidently not Garlasco’s, is to stop dropping bombs).

Asked about Iraq and international law, in late 2003, President George W. Bush answered, “International law? I better call my lawyer. He didn’t bring that up to me.”

The illegality of aggressive war mattered none to Bush when he unleashed “shock and awe” on Iraqis (supported by Joe Biden as Senate Foreign Relations chairman). Nor does law enter into most military decisions.

A 2007 Salon article (preceding the “60 Minutes” telecast) described efforts to minimize “collateral damage” (civilian casualties) by carefully planned aerial missions, reviewed by attorneys. But those, it said, constituted a minority of attacks. Most were hastily ordered and deadlier for civilians. Development of precision arms encouraged the writer.

By the way, following the 2003 attack on Iraq, officials and media emphasized its “surgical precision.” Yet innocents were struck and some bombs landed in Arabia, Syria, and Turkey.

However the system is refined, the fact remains that DoD knowingly kills civilians.

The Geneva Conventions’ two Protocols Additional (1977) ban any military attack on civilians, or any indiscriminate attack on both civilians and a military target. Although signed by the U.S., they never reached the Senate for ratification, yet are customarily considered part of international humanitarian law.

A 2019 DoD manual, The Commander’s Handbook on the Law of Land Warfare, disregards them. It does not forbid indiscriminate attacks. Instead it tells commanders to “refrain from attacks in which the expected loss or injury to civilians and damage to civilian objects would be excessive in relation to the concrete and direct military advantage to be gained....

“Civilians might be killed incidentally,” however “feasible efforts” should be made to reduce the risk. “Military necessity cannot justify excessive civilian loss.”

“Excessive” is left to each commander to define.

In other words (mine): It’s OK to kill a few civilians, applying this rule: The greater the strike’s value, the less civilians are worth (The civilians are foreign, of course. Slaying an American is murder).

How to reduce risks to civilians yet drop bombs on cities is not explained.

In Korea, Indochina, Iraq, Afghanistan, and elsewhere, I figure that as many as 10 million civilians may have succumbed to U.S. force. If that toll is not excessive, what on earth is?

Did the alleged war crimes below not cause excessive casualties?

The Constitution (Article 6) regards U.S. treaties as federal law. They include The Hague rules of war on land (1907). These prohibit, among other misdeeds, “the attack or bombardment by whatever means of towns, villages, dwellings, or buildings which are undefended....”

It did not stop the U.S. and its NATO underlings from two decades or air and ground attacks on peaceful Afghan communities and their unarmed residents. Starting with bombing raids on major cities (10/7/01), that undeclared war climaxed with the aerial slaughter of a family of 10 in Kabul (8/29/21). Reaction to it may have awakened DoD to the need for reform.

The main Geneva Conventions (1949) prohibit murder of civilians, among other atrocities. Yet wars result in massacres, and they go largely unpunished.

To rely on military commanders for decisions affecting human rights is to accept orders like “Fire on all taxicabs” (in Iraq), Shoot anything that moves” (in Vietnam and Iraq), and “Kill ‘em all” (in Korea).