"What If": The Uses and Abuses of Counterfactuals about Ukraine

Gavriel D. Rosenfeld is Professor of History at Fairfield University.  He is the author of five books and edits the blog The Counterfactual History Review. 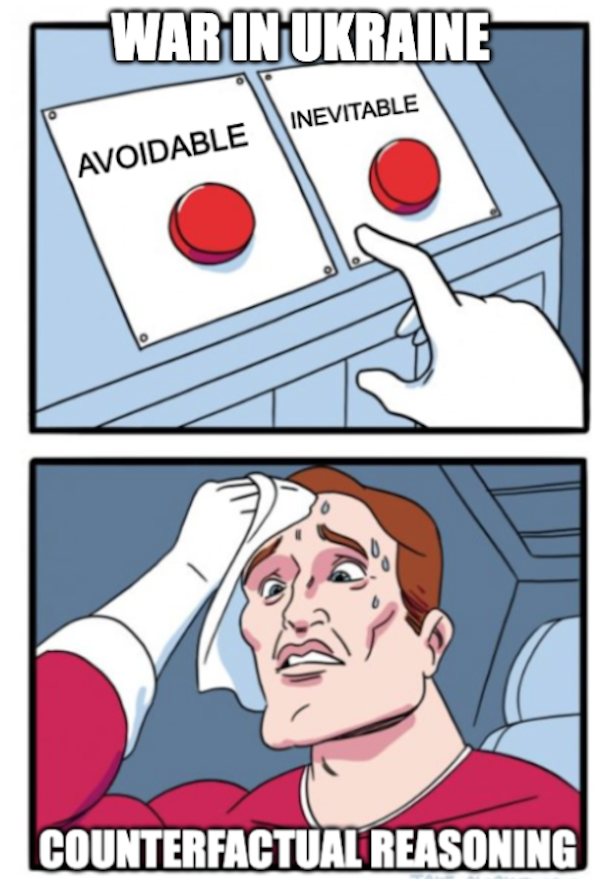 As scholars, journalists, and other writers seek to explain Russia’s invasion of Ukraine, many are employing counterfactuals.  Rather than merely identifying the events that led to the war, they are wondering “what if?” and speculating about whether it could have been avoided.

Not surprisingly, the response of commentators has been split.  Two groups representing competing methodological and political positions have employed counterfactuals against one another.  On the one hand, foreign policy “realists” hailing from both the isolationist right and the anti-imperialist left have accused the NATO alliance of missing opportunities to prevent Russia’s invasion of Ukraine.  On the other hand, foreign policy idealists representing the liberal center have insisted that the invasion was inevitable regardless of what the west might have done.

Among the representatives of the realist camp, political scientist John Mearsheimer recently argued that “Putin…would not have invaded Ukraine if the Biden administration had given a written guarantee not to expand NATO into Ukraine.”  Taking a similar position was Stephen Walt, who wrote that if “the United States and its European allies [had] not succumbed to...liberal idealism and relied instead on realism’s core insights, the present crisis would not have occurred.”  Political scientist Johannes Varwick agreed, noting that the west “should have tried beforehand to reach a reconciliation of interests with Russia” and “negotiate[d] neutrality for Ukraine.”  These and similar claims suggest that the west missed opportunities to prevent war.  “The greatest tragedy about Russia’s…invasion,” Walt concluded, “is how easily it could have been avoided.”

Likeminded commentators have used similar counterfactuals to score political points.  Rightwing supporters of Donald Trump, especially at Fox News, have endorsed the belief that “if...Trump were president…[the Russian invasion] would not have happened.”  Trump himself recently amplified this point in proclaiming that “If the Election wasn’t Rigged,…Russia would not have attacked Ukraine” and “the world would have had no problems whatsoever.”  Leftist critics, meanwhile, have echoed the claim that “the crisis could have been avoided if NATO had been willing to rule out membership for Ukraine” – though they have made this claim not to support Trump, but to attack western “imperialism.”

By contrast, liberal critics have challenged these counterfactuals with their own “what ifs.”  Political scientist Daniel Drezner rejected the realist hypothesis that “Russia would not have expanded its sphere of influence in the absence of NATO expansion,” noting that “from 1992 onward, Russia economically coerced its [neighbors]…all the time.” Journalist Matt Johnson concurred, writing that “Putin would have found some other pretext for the expansion of Russia’s sphere of influence,” insisting there was no chance that his “grand historical theory about the...unification of Russia and Ukraine would have remained buried somewhere in the back of his psyche.”  Political scientists Jan Smolenski and Jan Dutkiewicz, meanwhile, rejected the idea that NATO expansion was imperialistic, noting that “NATO...would not have ‘expanded’ into Eastern Europe if the Eastern European nations had not wanted it and actively pursued it.”

Liberal critics have also used counterfactuals to reject the claim that Trump would have prevented a Russian attack. As political scientist Nicholas Creel put it, “the only conceivable reason Putin wouldn't have invaded Ukraine under a second Trump term is that it very likely wouldn't have been necessary—with such an obsequious president who was…hellbent on undermining…NATO.”  International relations scholar Jeffrey Triestman argued that “Putin’s explicit foreign policy objective of rebuilding a ‘Greater Russia’…would not [have been]…dissuaded by any American president — including Trump.”  These claims were supported by a recent Politico Poll, which revealed that “45 percent of respondents said the invasion ‘definitely’ or ‘probably would have happened’ if Trump were still president.”

Finally, Ukrainians and Russians, have also employed counterfactuals to defend their views of the war.  The Ukrainian foreign policy analyst Svitlana Zalishchuk spoke for many when she alluded to the significance of her country’s surrendering of nuclear weapons in 1994, noting that "If we were the owner of nuclear weapons at the moment,...this war wouldn't have started." The Russian journalist Petr Akopov, meanwhile, justified the invasion by writing that “If Putin had not taken decisive action..., returning Ukraine [to Russia]...would have become more difficult with each passing decade.”

Examining how counterfactuals have been applied to the war in Ukraine underscores their importance as tools of historical understanding. Although “what ifs” have long been dismissed as antithetical to sound empirical analysis, they have long been used to explain historical events by singling out the relevance of contingent and deterministic forces.  To be sure, counterfactuals are limited in their explanatory power.  Because they are inherently unverifiable, they cannot prove whether the war in Ukraine was avoidable or inevitable.  Because they are highly subjective, counterfactuals often express wishful thinking rather than sober judgment.

At the same time, the very subjectivity of counterfactuals underscores their rhetorical power.  Because they channel deeply felt emotions about the past – especially regret that it did not turn out better -- they are powerful tools of persuasion.  Small wonder that the participants in historical debates have routinely used “what ifs” as rhetorical trump cards to bolster their empirical arguments. Appealing to fantasies about what might have been intensifies the power of rational arguments by lending them polemical heft.

As the destruction and suffering caused by the Russian invasion of Ukraine intensifies, the debate about its origins will likely become more emotional.  Counterfactuals will probably become more prominent as well.  Given their importance in historiographical controversies, we should expect that “what ifs” will increasingly shape how people evaluate the events still to come.