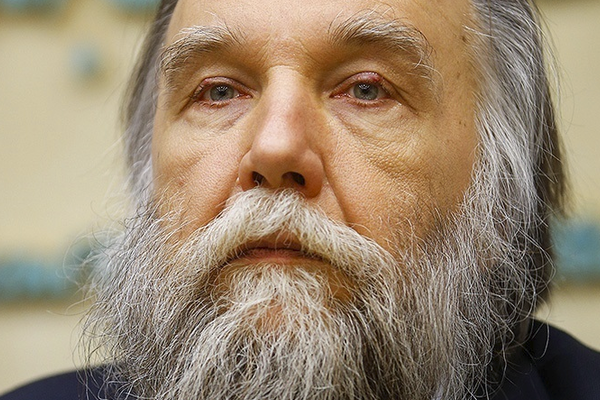 Should Vladimir Putin's barbarous war of Russian expansion move beyond the borders of Ukraine into Moldova, Finland, or even Sweden, then expect to hear the name "Aleksandr Gelyevich Dugin" far more frequently. A former philosophy professor at Moscow State University, Dugin has combined his obsessions with occultism and the neo-pagan philosophies of European fascists like Julius Evola and Alain de Benoist to derive his fervently nationalistic ideology of "Eurasianism," promulgated in books with torpid titles such as Foundations of Geopolitics and The Fourth Political Theory.

With his disheveled dress and long beard, Dugin affects the appearance of an Orthodox mystic, bearing a not uncoincidental resemblance to the monk Grigori Rasputin. In the West, a philosopher like Dugin expressing admiration for both Satanism and the Waffen-SS would be dismissed as a crank; proclamations that national greatness are to be found in a "genuine, true, radically revolutionary and consistent, fascist fascism" would rightly not endear you to the public at large. In the Russian Federation, however, Dugin is an adviser to high-ranking members of Vladimir Putin's United Russia party. Even more disturbing, according to Foreign Policy, his 1997 Foundations of Geopolitics has been required reading for students at the Military Academy of the General Staff of the Armed Forces of the Russian Federation for a generation.

Gestated in anti-communist right-wing activism during the waning days of the Soviet Union, indebted to a specifically anti-liberal and anti-Enlightenment philosophical embrace of authoritarianism, irrationalism, and hyper-nationalism, Dugin dreams of a reborn Orthodox Tsarist state surpassing the borders and spheres of influence as they existed before 1989, of a Novorossiya built not on socialist principles, but fascist ones. In Foundations of Geopolitics, which Dugin describes as a brief for Russian ambitions from "Dublin to Vladivostok," the philosopher claims that "Ukraine as a state has no geopolitical meaning. It has no particular cultural import or universal significance, no geographic uniqueness, no ethnic exclusiveness," fulminating that Moscow must solve "the Ukrainian problem." If you want to know what the fascists intend to do, it's always wise to pay attention to what they literally say, otherwise you might be caught surprised. In looking for an interpretive key to understanding Putin's unhinged February 22 address on the eve of invasion, which was replete with bizarre historical revisionism, we'd all do well to familiarize ourselves with the contents of Foundations of Geopolitics. Understanding Putin's motivations, his current actions, and his future plans depends on a thorough comprehension of the sort of dangerous ideas advocated by an ideologue like Dugin, a man whom historian Timothy Snyder described in The Road to Unfreedom: Russia, Europe, America as having "revived or remade Nazi ideas for Russian purposes."

With pretensions to being a Russian version of the German existentialist Martin Heidegger and of serving the same political purpose as the Nazi theorist Carl Schmidt, Dugin posits that the global order is split between thalassocracies and tellurocracies, with the former being maritime nations defined by individualism and "rootless cosmopolitanism" and the latter referring to land-empires rooted in a "blood and soil" nationalism. In the current day, Dugin defines the United States, Great Britain, and the NATO alliance more broadly as a fundamentally "Atlantean" thalassocracy, while the continent spanning Russian Federation and her future allies (willing and unwilling) as a "Eurasian" tellurocracy. As a dictum for the Eurasian order as he most properly understands it, he is guided by the principle that the "nation is everything; the individual is nothing." Dugin zestfully prophesizes a coming apocalyptic conflagration between these two orders, with a new Russian Empire arising from those ashes. "In principle, Eurasia and our space, the heartland Russia," writes Dugin, "remain the staging area of a new anti-bourgeois, anti-American revolution… the refusal to allow liberal values to dominate us."

While Russia observers have long signaled the alarm about Dugin's influence, with John Dunlap writing in a 2014 article from the journal Demokratizatsiya that the professor is a "dangerous Russian fascist" and two years later Paul Ratner at Big Think referring to him as "the most dangerous philosopher in the world," it behooves us right now to more coherently formulate the metaphors and analogies we use to understand the current conflict, because "Cold War" is an inadequate model for what we now face.

Popular culture depictions of Putin and the Kremlin are often filtered through a Cold War perspective, the sickle and hammer transposed into memes or the misunderstanding that the Russian dictator is somehow a communist (something engaged by both his detractors and admirers). It’s easy to see why such a misapprehension is so common when Putin is on the record as saying that the collapse of the Soviet Union was the "greatest geopolitical catastrophe of the twentieth-century." Putin's declaration evidences no sympathy for Marxist-Leninism or state socialism, however, but is rather a mourning for the loss of Russian territorial expanse and for Moscow's hegemony throughout eastern Europe and beyond. To say that we're in a "Cold War" (albeit one that's very hot in Kyiv) is to draw upon the wrong analogy. What the Kremlin currently wants isn't a return to the USSR, but as a reading of Dugin will demonstrate, the creation of a Novorossiya – a New Russia – a traditionalist, conservative, reactionary, revanchist order to act against modernity itself, with the philosopher writing in The Fourth Political Theory that " everything is to be cleansed off… science, values, philosophy, art, society, modes, patterns, 'truths,' understanding of Being, time and space. All is dead with Modernity. So it should end. We are going to end it." Incidentally, that quotation is from a passage in which Dugin extoled the leadership of Donald Trump.

Russia today is not the Soviet Union and Putin is not a premier. What both Putin and his court philosopher wish is to establish Russia as a new empire, a new Byzantium, a Third Rome, with the dictator as its Tsar. That Russia is a state mired in oligarchical corruption is well known, but to see financial incentive as the core of Putin's desire is to dangerously misapprehend the nature of our current threat, and it's not to take men like Dugin at their word. Understood not as a conventional leader, or even as a simple autocrat, but rather as the de facto spiritual head of a fascist International, suddenly Putin's behavior crystalizes into focus. The reactionary anti-LGBTQ laws in Russia, the financial and ideological support of far-right figures such as Marine Le Pen in France, Nigel Farage in Britain, and Trump in the United States, the forced annexation of Crimea and portions of Georgia, and now the offensive in Ukraine, don't make sense if we simply understand Putin as just another Russian autocrat.

The reality is far more dangerous. In an interview with Dissent about her book The Future is History: How Totalitarianism Reclaimed Russia, journalist and dissident Masha Gessen explains that the "reason why the rest of the world was so slow to recognize the threat posed by both Hitler and Stalin was that what passed for ideology seemed preposterous," but that "Putin isn't that different." In this context, I fear that "New Cold War" is an overly sunny analogy. No sane person would ever choose war, but whether or not it's something we desire, war appears to have been chosen for us.