Are Historians Too Credulous of the Single Culprit Explanation of the Reichstag Fire?

Benjamin Carter Hett is Professor of History at Hunter College and the CUNY Graduate Center. He is the author of books including Burning the Reichstag: An Investigation Into the Third Reich’s Enduring Mystery (Oxford University Press, 2014) and most recently The Nazi Menace: Hitler, Churchill, Roosevelt, Stalin, and the Road to War (Henry Holt and Co., 2020). 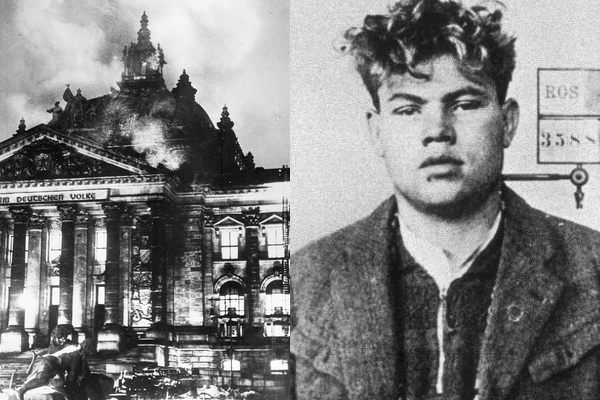 In late February 1933 a fire in the Reichstag – Germany’s Parliament – gave Adolf Hitler a pretext to use draconian emergency decrees to create a dictatorship.

Who actually set the fire? That part remains mysterious.

Given this mystery, historians who have written about the fire in the nearly eighty-nine years since it occurred have been prone to a puzzling tendency: a striking disinterest in the actual evidence. This is particularly true of those who support the “single culprit theory” – the idea that the eccentric Dutch journeyman stonemason Marinus van der Lubbe set the fire all by himself, with no assistance from Nazis, Communists, or anyone else.

Van der Lubbe was the only person arrested in the burning Reichstag. He wanted credit for the fire, and he claimed repeatedly, up to his execution by guillotine, that he alone had set it.

Today the argument continues: Was van der Lubbe the sole culprit, or was he only a tool in someone else’s conspiracy?

Important evidence about the fire continues to turn up. In the 1990s approximately three hundred volumes of documents from the 1933 investigations and trial became freely available in Germany’s Federal Archives in Berlin. Before that, they had been locked away in East Berlin, and before that in Moscow. In 2017 the comprehensive private archive of the intelligence officer Fritz Tobias – author of a widely-cited 1962 book on the fire – was opened to researchers at the German Federal Archives’ Koblenz branch. Over decades, through his wide contacts and the powers of his office, Tobias had gathered a huge collection of documents, some of them classified at the time that he acquired them.

But despite these riches, in 2008 the German journalist Sven Felix Kellerhoff wrote a book supporting the single-culprit theory (with an English translation appearing in 2016) after consulting, according to his own notes, no more than twenty-six of the three hundred Berlin files. Single culprit advocates have shown even less interest in Tobias’s papers in Koblenz. They unfailingly combine a lack of curiosity about the new materials with a firm insistence that they contain nothing of interest.

There has been renewed interest in the Reichstag fire in very recent years: It is, so to speak, hot again. Historians and political commentators from Timothy Snyder to Masha Gessen to Dana Milbank have seen in it a kind of portent of what is happening or might happen in the age of Trump, Putin, Orban et al.[1] It is a story of fake news, of tribalism in politics, of what kinds of evidence we believe and what kinds of people we are.

In a recent book, Professor Richard J. Evans has entered the debate as well. Evans has written about the fire before, including in a review highly critical of my own contribution to the matter. He returns to the subject in a chapter of The Hitler Conspiracies (2020).[2]

The core of Evans’s case is this: “The argument for van der Lubbe’s sole culpability for the Reichstag fire is overwhelming.” (Evans 118). He refers often, and approvingly, to Fritz Tobias’s book which, he says, sifted “meticulous[ly]” and objectively through the evidence to arrive at this overwhelming result. (Evans 95)

Those who still wish to argue for a Nazi conspiracy, he says, must deal with the frustration of having no actual evidence for their case. All they can do is impugn the testimony and slander the reputations of secondary figures, including the police officers who investigated the fire, and Tobias himself.

This is the same argument that Evans has made before. The problem is that just because Evans doesn’t know about evidence, that doesn’t mean evidence doesn’t exist. He hasn’t looked at the newly available archive resources. He doesn’t even know where they are (he thinks Tobias’s papers are in Berlin, when in fact they are in Koblenz).

The other problem is that Evans believes the account of Fritz Tobias. But Tobias, as my research demonstrated beyond argument, lied, invented and misrepresented evidence, and even invented witnesses. He suppressed crucial evidence that was in his own possession. Ironically, these are all the same sins that Evans demonstrated so effectively against the Holocaust denier David Irving in the famous trial in 2000, and in his fascinating book, Lying About Hitler.[3] So you would think Evans would care about these things.

Some of the evidence that has recently become available points clearly to an answer to the mystery of who started the fire. Some of it, on the other hand, points to deliberate efforts to distort the story, especially in the early postwar years in West Germany. Fritz Tobias was the most important actor in this distortion. Evans is one of many historians content simply to believe Tobias, while suffering from a lack of curiosity about the real evidence.

Everyone agrees that the use of gasoline or kerosene in setting the fire is a crucial point of evidence. No one claims van der Lubbe had any such thing with him, so if an accelerant were used to start the fire, there had to have been additional culprits (and all experts on fire who have studied the case say that an accelerant had to have been used for the fire to spread so quickly). Evans writes that “[Fritz] Tobias pointed out that no traces of flammable liquids or containers had been found at the site of the fire,” and he considers this point conclusive. (Evans 96)

It is true that Tobias wrote this, basing his claim on statements made in 1933 by the chemist Dr. August Brüning, who had done tests on some carpet in the Reichstag’s “Bismarck Room” and found no traces of petroleum. Tobias never mentioned that Brüning’s tests did not come from the main chamber, the only site that actually mattered for assessing the cause of the fire.

But even as he wrote his book, Tobias had in his possession a letter Brüning wrote in 1956 saying that in 1933 he, Brüning, had “put forward the view” that the Reichstag fire had been a “thoroughly prepared arson with a fluid accelerant.”[4] The letter is in Tobias’s papers in the Federal Archives in Koblenz. Tobias never made it public, though when I interviewed him in 2008 he vented his rage at Brüning for writing it.

Now to the second point.

The real source of the single culprit theory was a small group of ex-Gestapo officers who in the late 1940s and 1950s were trying to rebuild their careers and stay out of prison. They all faced criminal investigations for their part in the fire investigations, and they needed a story that made it look like they had been conscientious police officers who told truth to power.

So they invented the story that they had always thought van der Lubbe was a sole culprit and they had told their Nazi bosses this. The investigation documents now available in Berlin show this story to be complete nonsense: in fact in 1933 these officers had insisted van der Lubbe had Communist accomplices, and they tried hard to frame a large number of innocent people. But to know this, you would have to be curious enough to read the archival documents.

Tobias claimed that these officers had been faithful servants of the Weimar Republic and anti-Nazis who had clean wartime records. In fact, most of these men had joined the Nazi Party before 1933 and went on to do even worse things later: deporting Jews to Auschwitz, mass shootings on the Eastern Front, and policing the Ghetto of Lodz, for instance. This matters for two reasons: their records, and their desire to sanitize them, affect how we consider their credibility (and Tobias’s, who knew the facts of their record but publicized their sanitized version) – and the effort to avoid prosecution gave them a further motive to lie about the Reichstag fire.

Fritz Tobias built his lengthy book on their defense strategy. He even called them his “clients” – not, for instance, his “sources.”[5]

An important, newly discovered document makes clear the officers’ motives in creating their story, and Tobias’s motives in publicizing it.

In 2015 I published an article based on this document, a memorandum which Tobias drafted in 1963 to explain why he wrote his book.[6] The editor and I invited Evans to respond to my argument in that journal’s pages. He declined. And in his recent book he doesn’t cite the article.

In this memo (also to be found in Tobias’s papers in Koblenz) Tobias wrote that he had begun research on the fire in 1951 or 1952, and continued it for years afterwards, always on the basis of “orders or requests given or approved officially.” Throughout this period he had worked for the interior ministry of the state of Lower Saxony, mostly in that state’s domestic intelligence services. The initial reason for the officially approved orders was the state’s desire to defend Walter Zirpins, a senior Lower Saxon police official, who in 1951 faced allegations about both his conduct of the Reichstag fire investigation (that he had framed van der Lubbe) and his time as head of the police in the Lodz Ghetto.

Tobias’s work, emphasizing and depending on Zirpins’s integrity, succeeded in rehabilitating Zirpins in the short term. As the danger to Zirpins receded, Tobias explained, the motive for his research shifted to producing a version of the Reichstag fire that would make effective Cold War propaganda – again mostly by rehabilitating other ex-Nazis serving in West German police forces. His book, by his own admission, was not a disinterested bit of research. It was a covert intelligence operation.

But the success of Tobias’s rehabilitation of Zirpins was not fated to be permanent. Zirpins’s own former employer – the Criminal Police of Lower Saxony – has now produced (through the work of two police officers with PhDs in history, Karola Hagemann and Sven Kohrs) a deeply-researched biography that comes to some interesting conclusions.

Far from being a conscientious, Weimar-spirited officer, Hagemann and Kohrs show that Zirpins was a convinced Nazi who maintained his Nazi views long after the war, “one of the bosses, one of the carriers of National Socialism.” On the Reichstag fire specifically, they find that, far from working “cleanly,” all evidence points to the conclusion that Zirpins “deliberately misrepresented” the results of his investigation, even inventing evidence to frame Communists and heighten van der Lubbe’s supposed connection to them.[7]

Zirpins was the source for Tobias, and Tobias is the source for Evans. Evidence for a conclusion cannot be stronger than the weakest link in its chain. The Criminal Police of Lower Saxony, with every institutional motive to ignore the sources, is now setting an example of rigor in the investigation of the past that historians would do well to follow.

Editor's Note: HNN has invited Richard Evans to respond to this essay, and will update it if and when he does so.