80 Years Ago, Hitler's Declaration of War Against the United States Sealed the Fate of Europe's Jews

Brendan Simms is a professor in the history of international relations and fellow at Cambridge. He is the author most recently (with Charlie Laderman) of Hitler's American Gamble: Pearl Harbor and Germany's March to Global War (Basic Books, 2021). 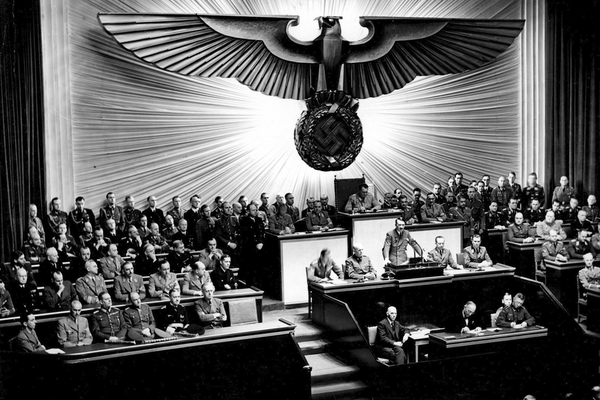 On December 12, 1941 Hitler was about to address Nazi party leaders in Berlin. The day before, he had declared war on the United States in the German Reichstag. The terrible consequences of this decision would be felt not only by combatants and the civilian population the world over, but especially by European Jews. The Nazi dictator was convinced that the U.S. president, international “plutocratic” capitalism and “world Jewry” were together bent on his destruction. For three years, Hitler had explicitly held European Jewry hostage to secure the good behavior of the Americans. Now he would make good on his threat.

Nearly three years earlier, in January 1939, Hitler had connected the emerging global coalition against him with the “Jewish Question” in a notorious speech to the Reichstag. “The German people,” he said, “must know who the men are who are trying to provoke a war at all costs” and for this reason all propaganda should be focussed on the “Jewish world enemy.” Hitler then issued a coded, but clear, warning to US President Roosevelt and world Jewry: “If Jewish international finance in and outside Europe should succeed in plunging the peoples into another war,” Hitler announced, “then the result will not be the Bolshevisation of the earth and thus the victory of Jewry, but the destruction of the Jewish race in Europe.” Hitler was sending an explicit message, at least in his own mind: European Jews would be held responsible not just for the behavior of “international finance Jewry” in Europe, but also in New York and in Roosevelt’s America generally. The Jews were in effect to be his hostages.

Hitler returned to this theme on several occasions over the next few years.  “The war with the US,” he remarked in March 1941, “was sure to come sooner or later anyway.” This was because in his view “Roosevelt and the Jewish financiers have no other choice than to strive for this war, since a German victory in Europe would mean enormous financial losses for the American Jews.” He also expressed his desire to “teach” American Jewry “a lesson.” The connection in Hitler’s mind between the Jews, capitalism and American policy towards Germany was thus clear.

Of course, Hitler’s genocidal ambitions had already been barbarically and brutally demonstrated well before December 1941. The murders of at least a million, mainly Soviet, Jews during the early stages of Operation Barbarossa were proof of his longstanding intentions. But as 1941 came to an end, millions of western and central European Jews were still alive, if in great peril. Nazi leaders had discussed their systematic destruction for some time, but the timing and technical details were still not agreed upon, and most importantly of all, the Führer himself had not yet communicated a final decision to the Nazi leadership.

The deportation of German Jews began in late October 1941, and gathered pace over the next few months. The intent at this point was not necessarily to murder the deportees. The first German transport of Jewish prisoners to Riga was explicitly marked “not for liquidation,” and when the local SS commander killed them anyway, SS leader Heinrich Himmler was genuinely furious. Unlike the Jews of the Soviet Union, who had been classified and murdered as enemy belligerents, the Jews of central and western Europe were still regarded as hostages to constrain Roosevelt.

Throughout the autumn of 1941, Hitler made the connection between US policy and the fate of European Jewry more and more explicit. When Alfred Rosenberg, the Nazi chief ideologue and Minister for the Occupied Territories in the East demanded retaliation against German Jews for Stalin’s deportation of the Volga Germans, Hitler refused. The Foreign Office was informed that the Führer was “holding back this measure for the event of an American entry into the war.” On October 25, 1941 Hitler privately repeated the “prophecy” he had made in January 1939, when he stated that the Jews of Europe would be held responsible for any new “[world] war.”

With Hitler’s declaration of war on December 11, the United States was now the Third Reich’s open enemy, and the European conflict had become the “world war” the Nazi dictator had warned against. On December 12, eighty years ago to the day, Hitler now informed the assembled Nazi leaders of his intention to “make a clean sweep” in the “Jewish Question.” He was referring to Central and western European Jewry, the hostages who were now held responsible for the behavior of the United States, as Hitler had long threatened they would be. He reminded the Gauleiter of his threat in 1939 to retaliate against Jewry in the event of their “plunging” Europe into war. “The world war is here,” Hitler continued, “[and] the extermination of the Jews must be the necessary consequence.”

“The Führer,” the Nazi chief ideologue Alfred Rosenberg records Hitler as stating two days later, “said that they [the Jews] had burdened us with this war, with all its ‘destruction’, so that “it was no wonder if the consequences should strike them first.”

In Russia, the Nazis had long treated Jews of both sexes and all ages, in or out of uniform, as enemy combatants (or partisans) to be systematically killed. Now the Jews of Germany, Central and Western Europe were to be murdered as well. Whether the entry of the United States into the war was the decisive factor here, or merely an accelerant, it is clear that after December 11, 1941 this relationship entered a new and more deadly phase. The murder of all remaining Jews under Nazi control was now a settled matter. At the start of 1942, most European Jews were still alive; by the end of war, most of them would be dead.