Alan Singer is a historian and professor in the Hofstra University Department of Teaching, Learning and Technology. He is the author of New York's Grand Emancipation Jubilee: Essays on Slavery, Resistance, Abolition, Teaching, and Historical Memory (SUNY Press, 2018). 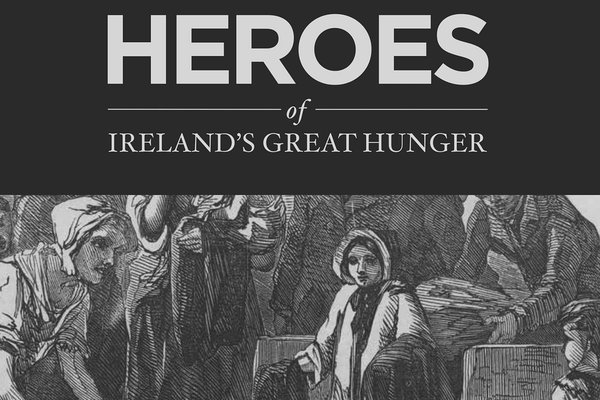 Christine Kinealy, professor of history and the founding director of Ireland’s Great Hunger Institute at Quinnipiac University in Connecticut, has created an impressive academic juggernaut for the study of the mid-19th century Great Irish Famine and for bringing the famine to the attention of a broader public. Her more recent published work includes The Bad Times. An Drochshaol (2015), a graphic novel for young people, developed with John Walsh, Private Charity to Ireland during the Great Hunger: The Kindness of Strangers (2013), Daniel O’Connell and Anti-Slavery: The Saddest People the Sun Sees (2011), and War and Peace: Ireland Since the 1960s (2010). She recently released a collection of essays, prepared with Jason King and Gerard Moran, Heroes of Ireland’s Great Hunger (2021, co-published by Quinnipiac University Press and Cork University Press). In Ireland, it is available through Cork University Press. In the United States, it is available in paperback on Amazon.

Co-editor Jason King is the academic coordinator for the Irish Heritage Trust and the National Famine Museum in Strokestown, County Roscommon, Ireland. Co-editor Gerard Moran is a historian and senior researcher based at the National University of Ireland – Galway.

Sections in Heroes of Ireland’s Great Hunger include “The Kindness of Strangers,” with chapters on Quaker philanthropy, an exiled Polish Count who distributed emergency famine relief, and an American sea captain who arranged food shipments to Ireland; “Women’s Agency,” with three chapters on women who “rolled up her linen sleeves” to aid the poor; “Medical Heroes,” with five doctors who risked their own lives to aid the Irish; and sections on the role of religious orders in providing relief and Irish leadership. Final reflections include a chapter on “The Choctaw Gift.” The Choctaw were an impoverished Native American tribe who suffered through the Trail of Tears displacement to the Oklahoma Territory. They donated more than they could afford to Irish Famine Relief because they understood the hardship of oppression and going without.

Kinealy, King, and Moran managed to enlist some of the top scholars in the field of Irish Studies from both sides of the Atlantic to document how individuals and groups made famine relief a priority, despite official government reticence and refusal in Great Britain and the United States. In her work, Kinealy continually draws connections between the Great Irish Famine and current issues, using the famine as a starting point for addressing problems in the world today. The introduction to the book opens with a discussion of the global response to the COVID-19 pandemic.

Readers meet powerful individuals who deserve a special place in the history books. James Hack Tuke, a Quaker, not only provided and distributed relief, but attempted to address the underlying issues that left Ireland, a British colony, impoverished. His reports from famine-inflicted areas highlighted pre-existing social conditions caused by poverty, not just famine-related hunger. His reports challenged the stereotype popularized in the British press that the Irish were lazy and stressed the compassion the Irish showed for their neighbors. While working with famine refugees in his British hometown of York, Tuke became ill with typhus, also known as “Famine Fever,” a disease that caused him to suffer from debilitating after-effects for the rest of his life. After the famine subsided in the 1850s, Tuck continued his campaign for Irish independence from the British yoke.

Count Pawl de Strzelecki of Poland was an adopted British citizen who documented the impact of the Great Irish Famine so that British authorities could not ignore what was taking place and who spoke out against the inadequacy of British relief efforts. Strzelecki was a geographer, geologist, mineralogist, and explorer. As an agent for the British Association for the Relief of Distress in Ireland and the Highlands of Scotland, he submitted reports on conditions in County Donegal, Mayo and Sligo. The reports challenged the British government’s effort to minimize the impact of the famine of the Irish people. On a personal level, Strzelecki provided direct aid to impoverished Irish children and lobbied before Parliamentary committees for increased governmental and institutional attention to their plight. He later worked to provide assistance to women who were emigrating to Australia.

The chapter on Asenath Nicholson was written by my colleague at Hofstra University, Maureen Murphy, Director of the New York State Great Irish Famine Curriculum and author of Compassionate Stranger: Asenath Nicholson and the Great Irish Famine. Nicholson was an American Protestant evangelical who travelled the Irish countryside delivering relief packets and sending reports home to the United States in an effort to raise more money. While she distributed Bibles, she did not make participation in Protestant services a condition of aid, unlike a number of British aid workers. Murphy describes Nicholson as a “woman who was ahead of her time – a vegetarian, a teetotaler, a pacificist, and an outdoor exercise enthusiast” (96). Nicholson’s achievements were largely ignored by a male-dominated world until brought to public attention by Murphy’s work.

Daniel Donovan was a workhouse medical doctor in Skibbereen, perhaps the hardest hit town in County Cork and in all of Ireland. I consider him one of the most significant heroes included in the book. As epidemic diseases devoured the countryside, Dr. Dan, as he was known locally, treated the poor and documented conditions for the outside world. Donovan’s diary reported on the impact of the famine in Skibbereen was published in 1846 as Distress in West Carberry – Diary of a Dispensary Doctor and sections were reprinted in a number of newspapers in Ireland and England, including The Illustrated London News. Dr. Dan, who became a major international medical commentator on famine, fever, and cholera, continued to serve the people of Skibbereen until his death in 1877.

I do have one area of disagreement with the editors. I would have included a section on the leaders of Young Ireland and the 1848 rebellion against British rule, including William Smith O’Brien, John Blake Dillon, John Mitchel, and Thomas Meagher. Rebellion, as well as relief, was an important and heroic response to the Great Irish Famine.

At Hofstra University in suburban New York, I teach a course on the history of the Great Irish Famine and its significance for understanding the world today. Too often courses like these focus on horrors and I look forward to using this book in class to shift the focus, at least in part, to heroes.