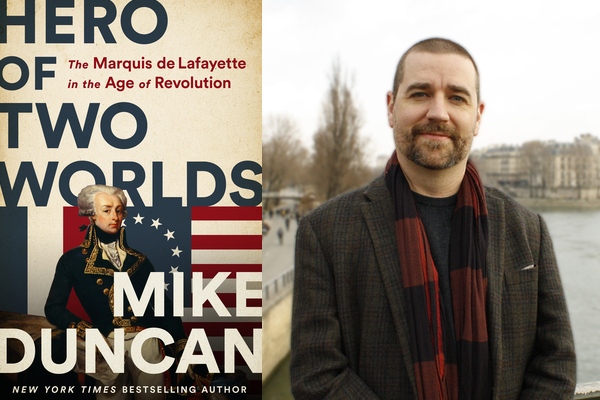 From Hero of Two Worlds: The Marquis de Lafayette in the Age of Revolution by Mike Duncan, copyright © 2021. Reprinted by permission of PublicAffairs, an imprint of Hachette Book Group, Inc.

As soon as he received the letter from President Monroe, Lafayette began arranging his return to America.

In July 1824, Lafayette, his son Georges, and his secretary Levasseur traveled to Le Havre, France, to meet their waiting ship. In France, local leaders couldn’t wait for Lafayette to leave. In America, they couldn’t wait for him to arrive.

Lafayette and the party arrived in New York on August 15, 1824. Newspapers publicized the imminent arrival of the Hero of Two Worlds, so when he reached Manhattan, boats of every shape and size packed the harbor. When he disembarked, an honor guard of aging veterans of the American War of Independence saluted the last surviving major general of the Continental Army. Lafayette had not set foot on American soil for forty years and already he could tell he was going to enjoy himself. It was nice to be loved again.

Here he was a living legend—a pristine icon of the most glorious days of the Revolution. He found himself as celebrated in Philadelphia as New Orleans; Vermont as much as South Carolina; rural hamlets as well as big cities. Lafayette belonged to everyone, and wherever he went he was described as the Nation’s Guest. Whether intended or not, his very presence reminded local and state leaders they were a single nation with a shared past and collective future. Lafayette certainly never let them forget it.

Lafayette’s admirer and friend Fanny Wright, who believed the United States represented the vanguard of human progress, met up with the party from England. As feared, the presence of the young woman was socially awkward. Eleanor Parke Custis Lewis, Washington’s step-granddaughter, who also joined Lafayette’s party in New York did not take kindly to the unaccompanied young woman.

Part of the reason for the tension with Nelly Lewis was Fanny Wright’s staunch abolitionism, while the Washingtons remained committed slave-owners. Lafayette was caught in between his own abolitionist principles and the desire for social harmony. Though he never publicly embarrassed his slave-owning friends in America, Lafayette also never missed an opportunity to demonstrate his own commitment to emancipation. Believing the universal education of the African population of paramount importance to successful emancipation, Lafayette made a point of visiting the African Free School, an academy established by the New York Manumission Society to give equal education to hundreds of black pupils.

Lafayette was greeted by an address from a bright eleven-year-old student named James McCune Smith: “Here, sir, you behold hundreds of the poor children of Africa sharing with those of a lighter hue in the blessings of education; and, while it will be our pleasure to remember the great deeds you have done for America, it will be our delight also to cherish the memory of General La Fayette as a friend to African emancipation, and as a member of this institution.” Young James McCune Smith would grow up to become the first African American to hold a medical degree, a prominent antebellum abolitionist, and mentor of Frederick Douglass.

As they moved into the southern states, Lafayette’s company confronted the unavoidable contradiction of American liberty and American slavery. Levasseur, as much an abolitionist as Lafayette and Wright, was not comfortable with the things he now saw. “When we have examined the truly great and liberal institutions of the United States with some attention,” he wrote, “the soul feels suddenly chilled and the imagination alarmed, in learning that at many points of this vast republic the horrible principle of slavery still reigns with all its sad and monstrous consequences.” As Levasseur published his journals under Lafayette’s general editorial direction, and whose political views the journal was meant to promote, we can take Levasseur’s observations as bearing Lafayette’s stamp of approval.

Reflecting on his travels, Levasseur remained hopeful emancipation was inevitable, partly because everyone agreed slavery was terrible. “For myself,” he wrote, “who have traversed the 24 states of the union, and in the course of a year have had more than one opportunity of hearing long and keen discussions upon this subject, I declare that I never have found but a single person who seriously defended this principle. This was a young man whose head, sufficiently imperfect in its organization, was filled with confused and ridiculous notions relative to Roman history, and appeared to be completely ignorant of the history of his own country; it would be waste of time to repeat here his crude and ignorant tirade.”

Lafayette and Levasseur shared a concern this racist ignorance threatened the standing of the United States in the world for its on-going violations of fundamental human rights: “If slave owners do not endeavor to instruct the children of the blacks, to prepare them for liberty; if the legislatures of the southern states do not fix upon some period, near or remote, when slavery shall cease, that part of the union will be for a still longer time exposed to the merited reproach of outraging the sacred principle contained in the first article of the Declaration of Rights; that all men are born free and equal.” And as Lafayette had written in his own declaration of rights, violation of this sacred principle always left open the right of the victims of tyranny to exercise another fundamental right: resistance to oppression.

The next stop on the official itinerary was a visit to Thomas Jefferson at his slave plantation, Monticello. Lafayette and Jefferson had not seen each other since 1789, during the hopeful days after the fall of the Bastille. Lafayette’s party spent a week at Monticello, and Jefferson escorted them to Charlottesville to tour his pride and joy: The University of Virginia. James Madison even made an appearance.

Levasseur noted while Lafayette stayed with his Virginian friends— all of them members of the plantation slave aristocracy—Lafayette did not shy away from bringing up emancipation: “Lafayette, who though perfectly understanding the disagreeable situation of American slaveholders, and respecting generally the motives which prevent them from more rapidly advancing in the definitive emancipation of the blacks, never missed an opportunity to defend the right which all men without exception have to liberty, broached among the friends of Mr. Madison the question of slavery. It was approached and discussed by them frankly It appears to me, that slavery cannot exist a long time in

Virginia, because all enlightened men condemn the principle of it, and when public opinion condemns a principle, its consequences cannot long continue to subsist.” Levasseur, however, was far too optimistic about the noble sentiments of the Virginians and the future prospects of slavery. Condemning something in principle has little bearing on whether it is allowed to persist in reality.

Lafayette made it back to Boston just in time for the Bunker Hill celebrations on June 17, 1825. After being escorted to the site in a carriage drawn by six white horses, he laid the cornerstone of the Bunker Hill monument. After a day of mutually admiring speechmaking, Lafayette requested a bag full of the dirt from the excavation site so he could take it home with him and always keep soil from the birthplace of American liberty.

Before Lafayette departed once and for all, George Washington Parke Custis conceived of sending a present to another liberty-loving American: Simón Bolívar. Bolívar recently completed a series of campaigns ending Spanish rule in Venezuela and Colombia and now campaigned in Peru. Citizens of the United States cheered the exploits of the Liberator, and Lafayette agreed Bolívar was the Washington of South America. The gift package included a pair of Washington’s pistols, a portrait of the late president, and a letter from Lafayette. Lafayette offered the President Liberator, “personal congratulations from a veteran of the common cause,” and said of the enclosed gifts, “I am happy to think that of all the existing men, and even of all the men of history, General Bolívar is the one to whom my paternal friend would have preferred to offer them. What more can I say to the great citizen whom South America hailed by the name of Liberator, a name confirmed by both worlds, and who, endowed with an influence equal to his disinterestedness, carries in his heart the love of liberty without any exception and the republic without any alloy?” Lafayette departed for home proud the great work of liberty continued its inexorable march through the Americas.

On September 8, 1825, a new naval frigate recently christened the Brandywine in Lafayette’s honor set sail for Europe with Lafayette aboard. He never returned to the United States. And while he sailed away content in the knowledge the legacy of his past glories would live forever in the New World, he hoped a few final future glories still lay ahead in the Old World.