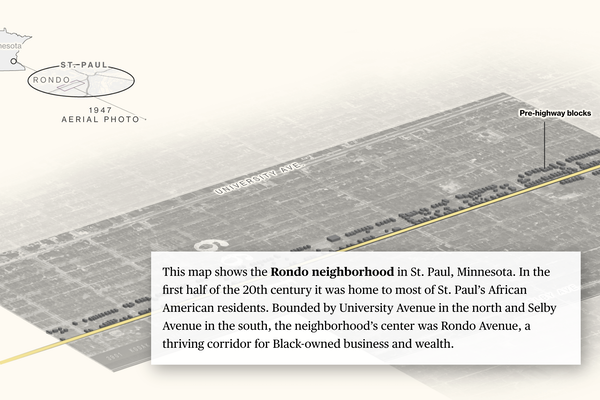 Take any major American city and you’re likely to find a historically Black neighborhood demolished, gashed in two, or cut off from the rest of the city by a highway. This legacy of racist federal transportation policies continues to define the landscapes of urban spaces.

This map shows the Rondo neighborhood in St. Paul, Minnesota. In the first half of the 20th century it was home to most of St. Paul’s African American residents. Bounded by University Avenue in the north and Selby Avenue in the south, the neighborhood’s center was Rondo Avenue, a thriving corridor for Black-owned business and wealth.

By the 1960s, the neighborhood’s business core was gone, replaced by newly constructed Interstate 94. Homes that had been a short walk to the shops now overlooked a six-lane highway shuttling commuters between the Twin Cities of Minneapolis and St. Paul. Homes and businesses were seized and destroyed under eminent domain. The neighborhood was split in two.

Now, ReConnect Rondo, a nonprofit, has proposed plans to build a cap over the freeway. The land bridge would re-knit part of the neighborhood and create up to 22 acres of land for the community to use as commercial, residential and park space.

Highways like Rondo’s were part of a nationwide effort to build the interstate highway system, sometimes in concert with federal urban renewal programs that sought to demolish neighborhoods considered “blighted” in the name of revitalizing cities. These demographic maps of seven U.S. cities in the 1950s show examples of how highways devastated established Black communities and hubs across the U.S.