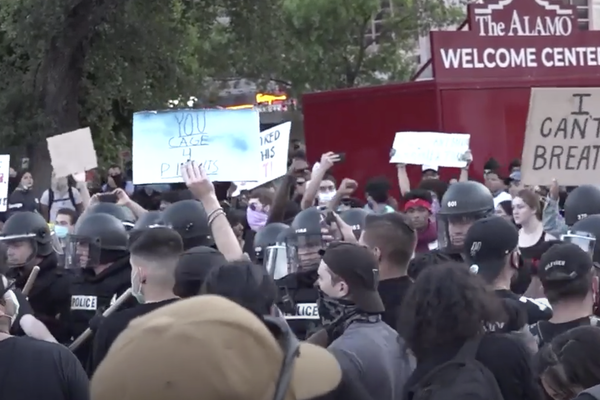 In recent years an intense struggle has been waged between Democratic officials in San Antonio and the state’s hard-right conservative leadership, led by Lt. Gov. Dan Patrick [R], an avid Trump supporter.  The Republicans insist on maintaining the traditional myth surrounding Alamo, a story that contemporary historians call “the Heroic Anglo Narrative.”

The San Antonio officials, however, want to update what’s left of the Alamo, a half-dozen aging structures on a four-acre site downtown, to include historical references to the contributions of Native Americans, Texas Latinos (Tejanos), and the importance of slavery to the white Texas colonists who rebelled against Mexico.

The struggle has, on several occasions, led to a tense standoff between young supporters aligned with Black Lives Matter and heavily armed members of a local right-wing group bearing  Confederate flags.

Most non-Texans are familiar with the idealized version of the 1836 Battle of the Alamo. This romantic tale reached mass audiences in the 1950s and ‘60s through books, movies and TV shows. For example, in the 1960 Hollywood epic The Alamo, John Wayne starred as Davy Crockett, a bold, freedom-loving American who led a small band of white men including Jim Bowie and William Travis. These courageous patriots were battling for “free” American-style government against the evil Mexican forces led by the villainous General Santa Anna. This Technicolor version of history featured an unlikely cast of Laurence Harvey as William B. Travis, Richard Widmark as Jim Bowie and teen idol Frankie Avalon who, of course, managed to insert a song into the bloody siege.

In the movie, the three courageous white men lead 200 Texians (white settlers) in a valiant but doomed struggle against a Mexican Army of some 6,000 men led by Santa Anna. After a week-long siege, all of the Alamo defenders are eventually slaughtered, but they delayed Santa Anna’s army long enough for another, larger group of Texas colonists to rally near the town of San Jacinto (near present-day Houston). There, forces under General Sam Houston ambush a depleted Mexican army and capture Santa Anna. This enabled Texas to become an independent republic (it was admitted into the United States as a slave state in 1845).

This Heroic Anglo Narrative went largely unchallenged until the 1970s, when Texas historians, informed by the Civil Rights movement, new views on American colonialism and the centrality of slavery, began to re-evaluate the causes of the rebellion. Books such as An Empire for Slavery: The Peculiar Institution in Texas 1826-1865 appeared, noting the importance of slave ownership to the white colonists.

Now in 2021 Forget the Alamo: The Rise and Fall of an American Myth by Bryan Burrough, Chris Tomlinson and Jason Stanford provides a fact-based account of the Alamo siege. It also shows how the legend developed over decades to further the needs of a conservative white Texas leadership class that openly discriminated against its Black and Latino citizens. The last chapters explain the current struggle between a largely Democratic city government and hard-right state leaders.

The authors point out that Mexico was an idealistic young country in 1836, having recently declared independence from Spain and adopted a new constitution abolishing slavery and establishing a parliamentary democracy. The rulers of Mexico watched with concern as white settlers from the U.S. poured into the fertile plains of east Texas to raise cotton, bringing enslaved Blacks with them.

According the heroic myth it was the “democratic values” of the white colonists that concerned Mexican authorities. For example, in a 1958 history written for young adults, author Robert Penn Warren omits any mention of slavery, writing that the Mexican government “feared the independence of this kind of man (the white colonists) … and they feared the kind of democracy which these men practiced.”

As the Forget the Alamo authors note,

“Stephen F. Austin, the so-called “Father of Texas,” spent years jousting with the Mexico City bureaucracy over the necessity of enslaved labor to the Texas economy. “Nothing is wanted (here) but money,” he wrote in a pair of 1832 letters, “and Negros are necessary to make it.”

The authors state “As hard as it may be to accept, Texas as we know it exists only because of slave labor. Southerners—and most Texians came from the South—wouldn’t immigrate to Texas without it.”

The three “central pillars” of the legend of the heroic narrative, Davy Crockett, Jim Bowie and William B. Travis, also come in for a thorough re-evaluation in the book and emerge as reckless rogues rather than far-sighted heroes.

According to the authors, in 1836 Davy Crockett (known for his coonskin hat) “may have been the most famous man in America, a fact that had almost nothing to do” with any real achievements. He was a “shameless self-promoter” who parlayed a talent for telling tall tales into a brief stint as a Tennessee Congressman. Defeated for re-election, he headed for Texas, where he received 4,400 acres of land in exchange for serving a six-month stint in the new Texas army.

The Alamo legend has him firing his rifle until he ran out of ammunition, then swinging the gun at Mexican soldiers until he was overpowered.  The Forget authors cite Mexican accounts that say he spent most of the battle huddled under blankets in the sickbay, where he was ultimately stabbed to death.

Jim Bowie (his brother invented the “Bowie” knife), was slave dealer, a murderer and a con man who fled to Texas to avoid law enforcement. William B. Travis, the military leader of the rebel forces, was “a pompous, racist agitator and syphilitic lech.”

The authors conclude by explaining their title: “Maybe it is time to forget the Alamo, or at least the whitewashed story, and start telling the history that includes everyone.”

Lt. Governor Dan Patrick, who hopes to run for governor in the future, has openly criticized the Forget The Alamo book as “a fact-free rewriting of Texas history.” He personally ordered the Texas State History Museum in Austin to cancel a July 1 lecture by the authors.

In a guest editorial published in the Washington Post defending his book, author Jason Stanford ridiculed the heavy-handed censorship, and concluded “If Texans were tough enough to fight at the Alamo, they should be tough enough to talk about why.”