The Girders of Steel City's History 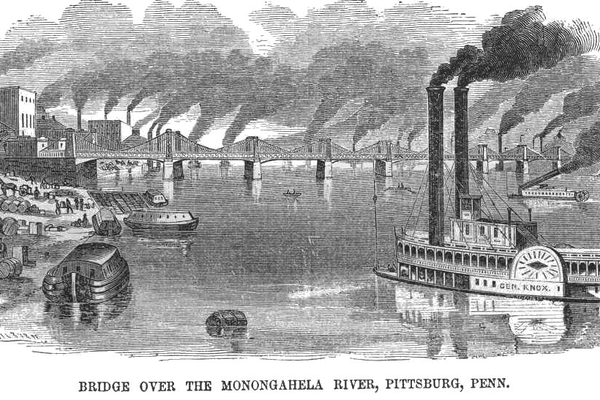 The gothic granite-stoned gate-house with its red-tiled roof at the Butler Street entrance to Pittsburgh's Allegheny Cemetery, a line of tall wrought iron fencing circumnavigates the entire wooded graveyard and separates the necropolis from the neighborhoods of the living--treeless Lawrenceville, Bloomfield, and Garfield, with their nineteenth-century red-bricked rowhouses and townhomes. There is a memorial deep within the cemetery displaying a surprisingly early birthdate of 1787 for this relatively young city built on what had once been the American frontier. A white headstone displaying an eroded relief of a dove with an olive-branch in its mouth marks the grave of Neville B. Craig, the place of repose for the almost completely forgotten man who in 1851 provided the city's first narrative in The History of Pittsburgh: With a Brief Notice of its Facilities of Communication, and Other Advantages for Commercial and Manufacturing Purposes--an attempt commensurate with the rising glory of the western metropolis.

"Our design in preparing our book was to give… a plain narrative of the steps by which the heavily timbered land, at the head of the Ohio, was converted into thriving and populous cities and villages," Craig writes in his preface. Locals will recognize both "Craig" and "Neville" from the names of streets in the Oakland neighborhood, though few would be able to tell you whom they honored. A veritable prince of Pittsburgh, Craig's father Isaac served as the Chief Burgess (effectively the mayor) of the city as part of the Federalist Party, and his matrilinear grandfather General John Neville was a wealthy Virginian who served with distinction in the French and Indian War, Lord Dunsmore's War, and the American Revolution, the rare aristocratic Cavalier amidst the rough-and-tumble frontier settlement. Born within the Fort Pitt Blockhouse the year that the Constitution was ratified, Craig was raised with the city whose history he would record. Working first as a lawyer, then as the editor of the Pittsburgh Gazette (for which he refused to print runaway slave ads paid for by Southern plantation owners), with intermittent stints in local politics, Craig developed historical interests when he began publishing a monthly magazine entitled Olden Times. As Craig discovered, "The annals of Pittsburgh… present greater variety of incidents than most American towns."

This is something that Craig and I are in agreement about. My new book from Belt Publishing entitled An Alternative History of Pittsburgh shares more than a similar title; both Craig and I consider the Iroquois, the struggle of the French and the British over the three rivers, the struggle between Pennsylvania and Virginia over the same land, the Revolution, the Whiskey Rebellion, and so on. Of course, I had sixteen decades of additional events to draw from, as Craig’s narrative ends right as the frontier town was poised to become one of the most consequential cities in the country, and mine finished as the economic collapse of the past generation closed that era of influence. In between, families like the Craigs, the Nevilles, and the Negleys would go on to be forgotten and replaced by titans like Carnegie, Frick, Westinghouse, Heinz, and Mellon, none of whom appear in The History of Pittsburgh. Before any of them, however, Craig had envisioned a Pittsburgh of rising magnificence, already calling it the "Iron City." Neville Craig invented Pittsburgh, the rest of us only report about it.

Beneficiary of a classical education, first at the Pittsburgh Academy (forerunner of the University of Pittsburgh) and then at Princeton, where he was expelled for taking part in a student riot, Craig would have learned about Aristotle's theories of poetics in rhetoric and philosophy class. Aristotle argued that history provides a relatively linear, unadorned, empirical account of things as they actually happened, whereas poetry dwells in possibility and imagination, and doesn't have to be handmaiden to fact in the same way. The History of Pittsburgh's introduction states something similar, with Craig writing that his purpose was to detail "with greater accuracy the events which have actually occurred," as opposed to engaging in a "play of fancy" whereby "distance lends enchantment." Here my purpose diverges from Craig's – not that my intent is preferable, but merely different. As I make clear in my introduction, "I've made no claim to completism" having rather assembled less of a linear account than "Rorschach inkblots… a diary… [and] a dream journal." My work – despite its title – is less historiography than a work of creative non-fiction which relies on the research of a multitude of others who made my ruminations possible, including the work of Craig.

He wrote that his own history was built "from the scanty and scattered materials within our reach," but I was gifted with a voluminous historiography from which I could distill my little volume. Here I offer only a sampling of some of those titles. Both Thomas P. Slaughter and William Hogeland provide invaluable research on America's first and forgotten civil war, the former in The Whiskey Rebellion: Frontier Epilogue to the American Revolution and the later in the more recent The Whiskey Rebellion: George Washington, Alexander Hamilton, and the Frontier Rebels who Challenged America's Sovereignty. Craig covered the Whiskey Rebellion with keen interest – his father's homestead had been burnt down during the insurrection – and decades later descendants of Hugh Henry Brackenridge, a moderate leader of the rebels, decried The History of Pittsburgh for being biased (readers always have opinions, after all). Labor convulsions that happened a century after that conflict, and long after Craig had already died, were investigated by David Demarest in The River Ran Red: Homestead 1892 and Paul Krause's The Battle for Homestead, 1880-1892: Politics, Culture, and Steel, both books analyzing the events surrounding the infamous Pinkerton siege of a Carnegie Steel plant on the banks of the Monongahela, in which eight striking workers were killed, with the later explaining that in the "[g]reat disputes over the meaning of steel" there was "the articulation of still greater disputes over the meanings of America, progress, and the nature of democracy."

There is a tremendous wealth of research on Gilded Age Pittsburgh, examining the other side of that class divide which animated conflicts such as those at Homestead, and which proved invaluable to my project, including Kenneth Warren's Triumphant Capitalism: Henry Clay Frick and the Industrial Transformation of America and the pithily titled Meet You in Hell: Andrew Carnegie, Henry Clay Frick, and the Bitter Partnership that Changed America by Les Standiford. More recent history is also well represented in the literature; the contributions of Pittsburgh's Black community have been explored across several recent titles, including jazz writer David Hajdu's gorgeous biography of Duke Ellington's Homewood-born arranger Billy Strayhorn, Lush Life, and the almost preternaturally well-written Smoketown: The Untold Story of the Other Great Black Renaissance by Mark Whitaker, in which he argues that the Hill District was a "black version of the story of fifteenth-century Florence and early-twentieth century Vienna: a miraculous flowering of social and cultural achievement all at once, in one small city."

Though I argue in my book that as concerns the collapse of the steel industry a generation ago the "full story of what happened in Pittsburgh has… never been fully learned," that's not for lack of tremendous and brilliant scholarly accounts. Tracy Neumann's Remaking the Rust Belt: The Postindustrial Transformation of North America provided needed context about neo-liberal economics, as did William Serrin's older Homestead: The Tragedy of an American Steel Town, written in 1992 when the region's economic collapse was almost complete. Gabriel Winant's astute new book The Next Shift: The Fall of Industry and the Rise of Health Care in Rust Belt America was published after my book was already written, but his analysis of the changing industries in Pittsburgh has specifically informed subsequent work of mine. But no book about the disappearance of Big Steel has been as powerful as journalist John Hoerr's And the Wolf Finally Came: The Decline and Fall of the American Steel Industry, written with a historian's eye and a poet's ear, mournfully tallying the lack of a "sense of life, the teeming, active, energetic life" of places like the Mon Valley after the mills had closed.

Reading Craig's The History of Pittsburgh was a surreal experience, as it always is when you discover just how many observations and conclusions you've shared with the long dead. Since biography and history were simultaneous for that historian in the young city, his scholarship was an issue of gathering memory, eye-witness account, preserved testimony, and records; my own work just involved deriving a few impressionistic conclusions from those who already did the hard work of the archive. Yet from his historian's perspective and from my literary writer's viewpoint, we arrived at the same set of conclusions, though separated by more than a century-and-a-half. For both of us, what's most consequential about Pittsburgh is its geographic ambivalence between east and west, north and south, as well as the topographical enchantments of hill and valley, river and mountain, which I argue in my conclusion lends the city its unique "spirit of place." In those sentiments, I was inspired by two other historians – architectural librarian Martin Aurand's The Spectator and the Topographical City, which reads Pittsburgh's landscape as if it were a drama (and it is), and the art historian Franklin Toker's invaluable Pittsburgh: A New Portrait. Toker, who recently passed away, argues in his beautifully written book that as concerns the city, "[g]eography is destiny."

When viewing the skyline from Mount Washington, which overlooks the confluence of those three wide rivers, with dramatic sweep of the hills in the background, it's easy to comprehend Toker's point about how, with almost providential power, it was the material circumstances of the land itself which set the narrative of Pittsburgh in motion before anyone had even seen this place. In my book I describe "how the rivers wind and cut through the green-robed mountains, the manner in which the valleys descend deep into the earth and the hills puncture horizon like the planet's spine," and I conclude that its' this "something transcendental" that helped forge Pittsburgh as that consequence of America. Both of us saw Pittsburgh as a symbol of America itself, with Craig having written that "the Monongahela River, bearing its tribute of water from the South, comes to meet the lovely Allegheny flowing from the North, and by their union form the magnificent Ohio." Something humbling in that as different as Craig's Pittsburgh and mine might be, we saw the same rivers, the same valleys, and came to the same conclusions, before much of that history had even been written.