Barney White-Spunner is the author of Berlin: The Story of a City (Pegasus Books), a biography of the city from its founding in the Middle Ages to today. 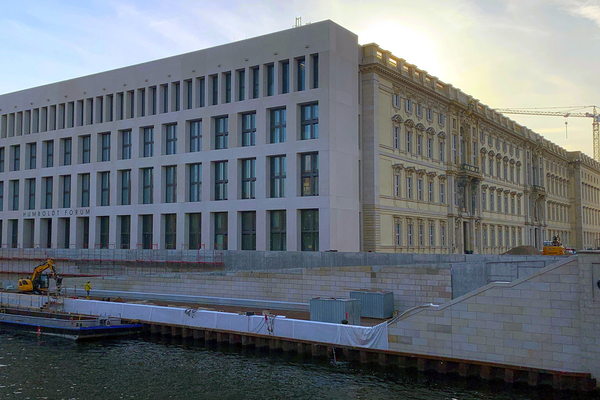 North (baroque) and East (Modern) fronts of the Humboldt Forum at the rebuilt Berlin Palace (2020).

Fifty-eight years ago, John F. Kennedy gave one of his most famous speeches. Speaking to huge crowds in West Berlin, he called on the free world to stand by Berliners divided by the Berlin Wall and threatened by their Communist neighbours. “All free men, wherever they may live, are citizens of Berlin,” Kennedy declared, to rapturous applause, “and therefore, as a free man, I take pride in the words ‘Ich bin ein Berliner’.” His speech writers needed a kicking as what he had actually said was that he was a Berlin doughnut – German is an unforgiving language – but that did not detract from the enormous impact his words had nor from the morale lift they gave to the citizens of a western city trapped in the communist bloc. It was one of the great post war speeches. Reagan’s speech 24 years later in front of Berlin’s iconic Brandenburg Gate, when he said, “Mr. Gorbachev, tear down this wall,” was also well received but never had quite the same impact; by 1987 it was clear that Gorbachev was probably going to do as he was asked.

Kennedy’s speech mattered so much because the Wall had only gone up two years before. The western allies – the USA, Britain and France who all maintained garrisons in West Berlin – did nothing. Actually, there was nothing they could do short of starting World War Three but Berliners felt that they had been betrayed. Willy Brandt, then Berlin’s charismatic mayor, had ranted to Kennedy that the USA had abandoned them. Kennedy’s visit to the city showed both American commitment and made Berlin the front line in the Cold War. He also strengthened a close link between the USA and Berlin born of the Berlin Airlift. Between June 1948 and May 1949 US aircrew made over a quarter of a million flights to keep Berliners alive as Stalin tried to starve them into submission; 31 Americans lost their lives. Only three years earlier those same crews had been dropping a more lethal cargo.

The unsmiling Soviet President Khrushchev felt he had to retaliate to Kennedy and a week later visited his satellite capital in East Berlin. His speech, perhaps unsurprisingly, failed to have quite the same effect. Yet despite feeling better about themselves for Kennedy’s very strong statement of support, Berliners had to live with that monstrous barrier of concrete and barbed wire, set about with watchtowers, death strips, machine guns, attack dogs and officious border guards for 28 years.

This year marks the 60th anniversary of its erection, on 13th. August 1961, an event that will not pass unnoticed in the city now reunited since 1989. Parts of the Wall have been preserved. In Friedrichshain a long section has become an outside art gallery, the famous East Side Gallery, while a more sombre memorial and museum in Bernauer Straße remembers the loss and suffering caused. In front of the Brandenburg Gate, and alongside the restored Reichstag, a line of cobbles in the street marks the one-time front line of the Free World.

Throughout its often violent and traumatic story, Berlin has always remembered through its buildings. While some European cities have practised a sort of heroic denial about their past, rebuilding themselves as they imagined they should have been, Berlin is comfortable in living alongside its history. How many other cities would put something as moving and important as the Holocaust Memorial in its very heart?

Perhaps the best example of this acceptance of Berlin’s past is the rebuilding of the Berliner Schloss. In 1415 the Hohenzollerns – kings of Prussia then emperors of Germany – took the twin fishing villages of Berlin and Cölln on the River Spree and made them their capital. In time they needed a suitable palace, as dynasties do, and successive kings built the huge Berliner Schloss on the island which divides the Spree and which came to form the city centre. Badly damaged in Hitler’s war, what remained was blown up in 1950 by the communist East German leader Walter Ulbricht. It was replaced by the Palast der Republik, which, in all its Soviet ugliness, was the asbestos ridden seat of East Germany’s nominal parliament. When Berlin was re-united in 1989 this was in its turn demolished, leaving an empty space at the very heart of one of the world’s great capital cities.

The debate as to how to fill that space was acrimonious and lasted 14 years. It was nuanced but essentially came down to being between those who thought the old Schloss should never have been demolished and should therefore be replaced and those who thought to do so would be to pander to a reactionary, authoritarian Berlin which was now an anachronism. What was needed, the modernists argued, was a futuristic building that portrayed opportunity and unity. Interestingly it was a debate that largely bypassed young Berliners who were more concerned about the city’s failure to deliver its new airport.

A panel of 17 international experts was invited to try to resolve the matter. Eventually they recommended that the old Schloss should be replaced but that the façade facing east, towards Alexanderplatz, would be modern. The Schloss, they argued, had always represented a synthesis of styles and the new façade would link the new buildings of East Berlin with the older Unter den Linden.Their recommendation was finally approved by the German parliament, the Bundestag, in 2002.

The completed building, now named the Humboldt Forum after two of Berlin’s most celebrated sons, should have opened last October. Frustrated by the pandemic it will, hopefully, be fully open later this year. Its purpose is, says Paul Spies, the art historian who heads Berlin’s museums, is to “show how the world is present in Berlin and Berlin is present in the world.” “It is not a museum,” says its new director Hartmut Dorgeloh, “it’s not a palace. It’s a forum, an accessible place where various parties congregate to engage with different ideas.”

There are those who remain unconvinced, one critic describing it as “Chernobyl – concrete on top of a problem,” but few can disagree that it draws together the previously divided city. Alongside Berlin’s cathedral and facing the facade of Schinkel’s Altes Museum across the Lustgarten, Berlin now has a centre on the island where the Hohenzollerns first built their fort six hundred years ago. The island is also home to Berlin’s incomparable series of museums, recently restored with equal success.

Sixty years after the Wall went up, JFK’s pledge has been amply redeemed. One of Europe’s great cities, its most exciting and innovative of cities, Berlin feels physically as well as politically united.