Warming is Clearly Visible in New US ‘Climate Normal’ Datasets

by Russ Schumacher and Becky Bolinger 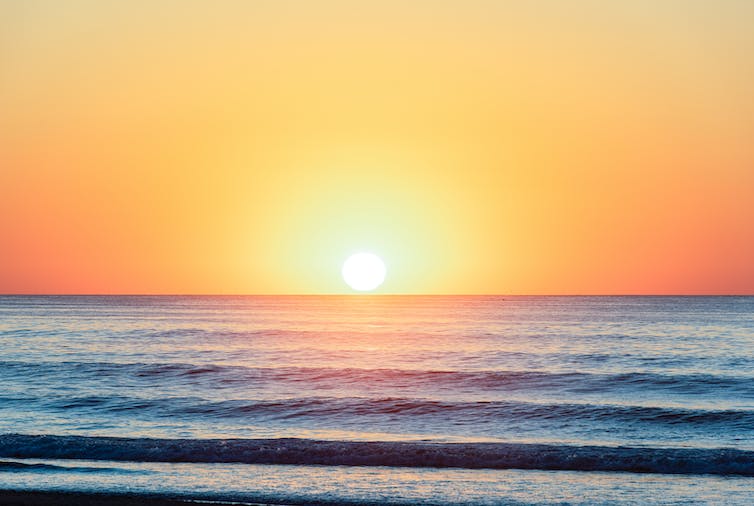 Anyone who listens to weather reports has heard meteorologists comment that yesterday’s temperature was 3 degrees above normal, or last month was much drier than normal. But what does “normal” mean in this context – and in a world in which the climate is changing?

The National Oceanic and Atmospheric Administration has released updated “climate normals” – datasets that the agency produces every 10 years to give forecasters and the public baseline measurements of average temperature, rainfall and other conditions across the U.S. As the state climatologist and assistant state climatologist for Colorado, we work with this information all the time. Here’s what climate normals are, how they’ve changed, and how you can best make sense of them.

What are the new normals?

NOAA’s National Centers for Environmental Information released the new set of normals, covering 1991-2020, on May 4, 2021. Climatologists have been performing calculations on data from long-term observing stations around the country for a wide range of parameters, including high and low temperature, precipitation and snowfall.

The data also includes more detailed statistics, like the normal number of days below freezing or those with more than an inch of snowfall. NOAA puts data from individual stations onto a grid to enable the creation of useful maps for the entire country, even in places with relatively few observing stations. This provides a wealth of information for anyone interested in the climate of a specific area.

Why are normals updated?

The World Meteorological Organization sets international standards for climatological normals, defined as a 30-year periods that are regularly updated. The idea is to have global consistency for analysis. The 30-year normals also create a benchmark that represents recent climate conditions and serves as a reference for assessing current conditions.

Climate change highlights the need for regularly updating these normals. For the past 10 years, weather professionals have used the 1981-2010 climate normals as our reference. But we’ve observed above-average temperatures much more frequently than below-average temperatures from 1991-2020 for much of the U.S. Updating the normals is a way to calibrate to our most recently observed climate.

And as the climate continues to change, the further away in time we get from the “normal” period, the less representative that period will become. Using a very long period of time, or not regularly updating the period, could lead to including observations that would be extremely unlikely in our climate today.

On the other hand, there are situations in which it makes sense to consider periods longer than 30 years – for example, to understand long-term changes to the climate or to monitor extremes. 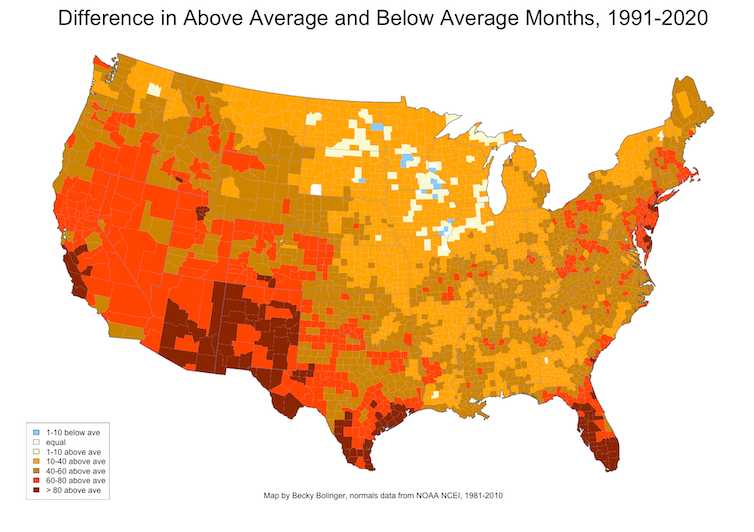 Difference in the number of months that had above-normal vs. below-normal temperature by county for the period 1991-2020, with respect to the 1981-2010 normals. Areas in red and brown had far more months that were were warmer than normal. Becky Bolinger, CC BY-ND

The concept of ‘normal’ in weather and climate

An old saying, often attributed to Mark Twain, asserts that “climate is what you expect, and weather is what you get.” Calculations of normal climate conditions for particular locations show how this works.

For example, data from the long-term weather and climate observing station in Fort Collins, Colorado, where we work, shows that precipitation in summer (June, July and August) over the 30 years from 1991 to 2020 varied significantly from year to year. The lowest summer rainfall was 1.48 inches in 2002 and the highest was 14.79 inches in 1997. Most years, it’s somewhere between 3 and 5 inches.

But few years match the average value, just shy of 5 inches. So even though we call this the “normal” amount of rainfall, in most years the total is higher or lower – sometimes by quite a bit. 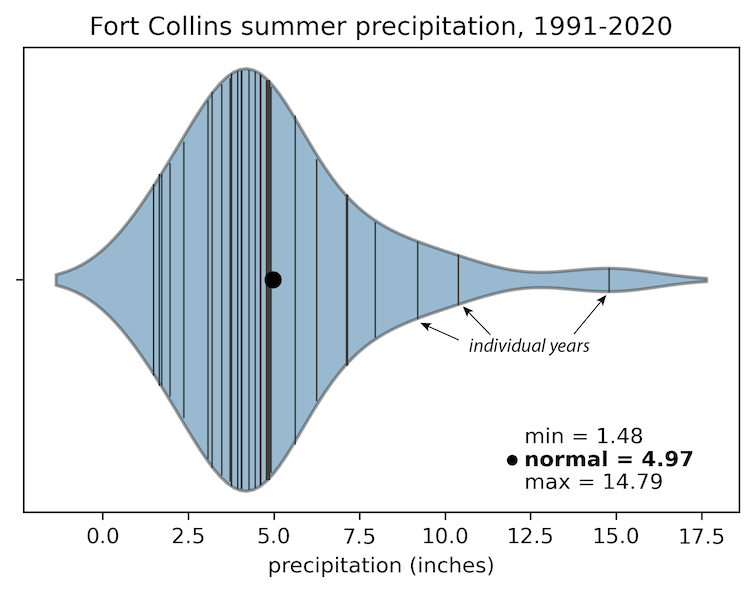 Comparing the 1981-2010 and 1991-2020 normals for Fort Collins, Colorado, shows how summers there are warming. The black circle indicates the average value for each time period. Credit: Russ Schumacher and Becky Bolinger.

What the new normals show

The key change that’s reflected in shifting from the 1981-2010 normals to the new 1991-2020 set is dropping the 1980s and adding the 2010s. The climate has been warming, so the new normals show higher temperatures for most regions and most months of the year.

Across the continental U.S., the temperature rose by about 0.5 F on average from the 1981-2010 to 1991-2020 period. The new average is 1.2 F warmer than that of the 20th century. A couple of exceptions are cooling observed in the spring over the Northern Great Plains and cooling over the Southeast and Mid-Atlantic in November. December shows the greatest amount of warming. 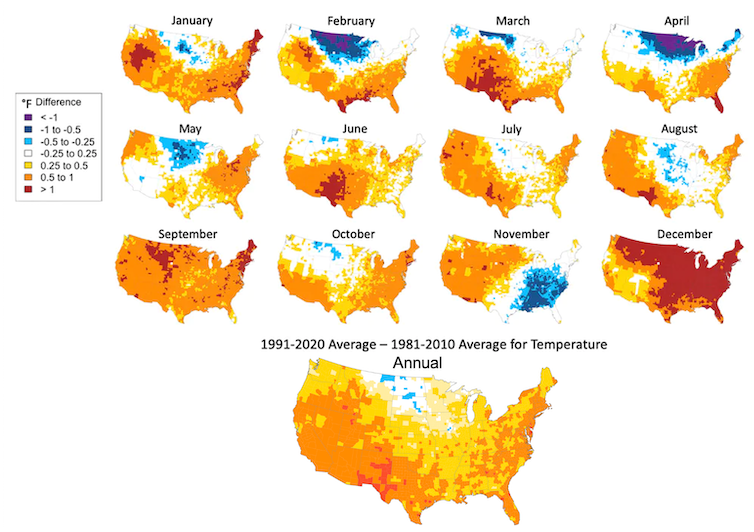 Precipitation is more variable than temperature from year to year and decade to decade. As a result, the changes in normal precipitation represent a mix of effects from long-term climate change and natural variations.

Overall, the 2010s were very wet in much of the central and eastern U.S. and dry in the west, and the normals reflect that. Average annual rainfall in Houston increased by over an inch, to 55.6 inches per year, while at Phoenix, Arizona, it dropped from an already dry 8.02 inches to a parched 7.22 inches per year.

On a monthly basis, some of the most notable patterns to emerge are widespread drying in November, particularly over the Gulf states and along the Pacific Coast, and a wetter pattern over the eastern half of the country in April. 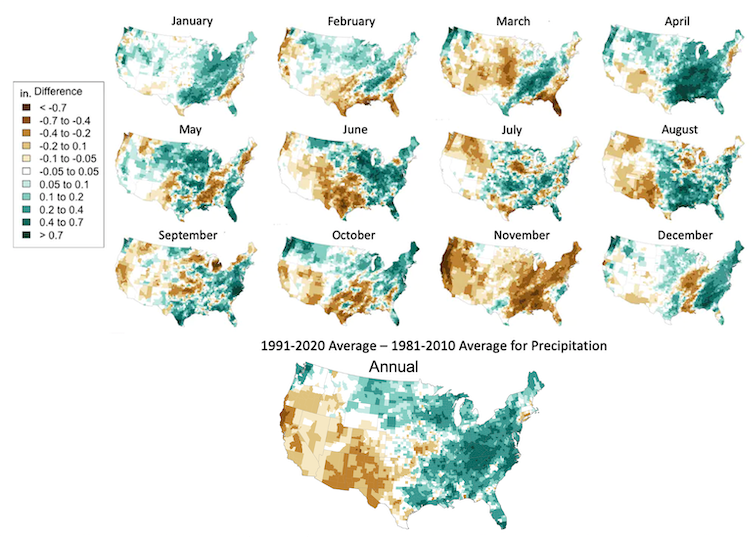 Shifting to new climate normals can have counterintuitive effects. For example, in the next few years there may be a better chance that you’ll see what are now described as cooler-than-normal temperatures in a given day or month. Using Fort Collins again as an example, before the update, a summer average temperature of 70 F would have been slightly warmer than normal. Now that same summer would go down as being slightly cooler than normal, even though it would still be warmer than around 100 of the 127 years in the history of that location.

Meteorologists and climatologists are already starting to incorporate these new normals into our work. But when you hear the term “normal,” keep in mind that it reflects a 30-year snapshot and represents a different reality today than it did 30, 60 or 100 years ago.

[Get our best science, health and technology stories. Sign up for The Conversation’s science newsletter.]