Experiments With Reality: New Histories of the Magical 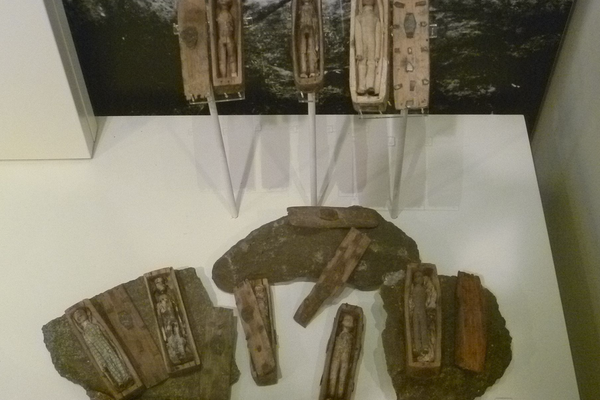 About a mile east of Edinburgh Castle, there is an extinct volcano with the rather mythic-sounding name of Arthur's Seat, which makes its gradual and green ascent over the Scottish capital. In 1836, a group of schoolboys who were rabbit hunting discovered some slate pulled over the entrance to a cave. Being curious, they pulled it aside and descended into the earth. There they would find something most unusual – seventeen miniature coffins, professionally carved with brass hinge pieces for the lid, each a little under four inches tall. Naturally, inside of the seventeen miniature coffins were seventeen miniature corpses – wooden dolls with unique faces and clothes stitched perfectly to their tiny bodies. Arranged in two lines of eight, with the final coffin by itself, the oldest was already showing signs of rot, while the latest could have been placed there only the day before. Something so mysterious, so strange, so creepy couldn't help but generate theories. Were they some sort of memorial? Votive offerings? Wooden homunculi? A contemporary editorial in The Scotsman noted that "Our own opinion would be, had we not some years ago abjured witchcraft and demonology, that there are still some of the weird sisters hovering about." Edinburg was a city of the Enlightenment, where a generation before thinkers like David Hume, Adam Smith, and Thomas Reid promulgated the stolid, sober, and commonsensical; where James Watt invented the steam engine and where James Clerk Maxwell would go on to discover the laws of thermodynamics. And yet in 1836, it seemed like somebody was practicing magic on Arthur's Seat.

The Arthur's Seat burial isn't mentioned in archeologist Chris Gosden's Magic: A History from Alchemy to Witchcraft, from the Ice Age to the Present, but in his career as curator of Oxford University's Pitt Rivers Museum he has handled "a witch in a bottle; a slug impaled on a blackthorn to stop the rain; potatoes carried by an old man in his picket to help with his rheumatism; the tip of a human tongue (no ideas about that one); and an onion stuck up a pub chimney with a piece of paper on which was written the name of a temperance campaigner trying to get the pub closed down." Such magic, Gosden argues, is a good deal more common than is assumed, not a marginal activity practiced by charlatans or gurus, but indeed a universal practice inextricably connected to religion and science, and one that hasn't been eclipsed in the modern world so much as it has been sublimated.

Within Magic, Gosden provides accounts of phenomena as diverse as witchcraft among the Azande, the Renaissance writings about Hermes Trismegistus, ancient Jewish incantation bowls used to capture demons, and shamanistic rituals of the Eurasian steppe. What these activities share is a view of existence which sees the sacred and the profane as ever permeable, where humans are able to affect not just their environment, but the nature of being itself. Gosden explains that "magic was a humanization of the universe. There is a continuity between the human will or actions and the world around us," for "magic allows the universe to enter us, whether this be through the movement of the stars or the messages relayed by moving stones." Hidden within the book is a more succinct definition; when discussing Scythian art, Gosden describes it as a "series of experiments with reality," an adept summation which includes phenomena as diverse as Kabbalah, the I-Ching, and druidic ceremonies.

An expert in ancient Celtic art, Gosden has done field work from Papua New Guinea to Mongolia, and his vociferous interests encompass astrology, alchemy, and divination. At times Magic's focus can seem so vast that it reads a bit like Professor Casaubon's Key to All Mythologies in George Eliot's Middlemarch, and yet Gosden's enthusiasm is well taken. He isn't the first contemporary scholar to take magic seriously (something which he notes), as the past two generations of researchers in fields as diverse as history, anthropology, religious studies, literary studies, sociology, and psychology have all rejected the dismissiveness of previous scholars. Gosden explains that that traditional historiography promoted "the idea that human intellectual culture moved from a belief in magic, to a belief in religion, and then to a belief in science. Each successive belief system was more rational, institutionally based and effective than its predecessor," but that model wasn't only simplistic and disrespectful, it also minimized the ways in which magic has been instrumental in the making of meaning.

Within my own discipline of Renaissance Studies, scholars such as Keith Thomas in Religion and the Decline of Magic (1971), Dame Frances Yates in The Rosicrucian Enlightenment (1972), Ronald Hutton in The Rise and Fall of Merry England: The Ritual Year 1400-1700 (1994), and Owen Davies' Grimoires: A History of Magic Books (2009) have all examined the centrality of magic. Davies writes in Magic: A Short Introduction that his subject " provided emotional empowerment… and inspired solutions when alternative sources of knowledge (including science) were inadequate." What magic offered wasn't explanation of how things happened so much as to why they did; a science of the symbolic rather than the empirical. Gosden's approach to magic is to understand what it does for those who believe in it, rather than to dismiss it as mere superstition. He writes that "human history is not purely or mainly about a practical mastery of the world but creating a set of close relationships with magical forces," which is to say with ineffable, intangible, transcendent meaning. Magic rituals, be they casting lots, making an astrological star chart, or indeed suturing tiny wooden dolls into small coffins for some inscrutable reason, aren't done for the same practical purposes that planting a field or digging a well are, for magic is about giving shape to a "sense of self and group… Magic is derived from participation, and participation has many dimensions." What Gosden conveys is just how normal magic is, an intractable part of the human experience that's as central to our expressions of meaning as formally organized religion.

Though Gosden is admirably anti-positivist, rightly refusing the fallacy which interprets magic as simply inadequate science, or worse, as mere hucksterism, the book would have benefited by more thorough engagement with philosophical argumentation. Writing with the confidence of Casaubon, Gosden sweepingly argues that "Human history as a whole is made up of a triple helix of magic, religion and science, the boundaries between which are fuzzy and changing, but their mutual tension is creative." This theoretical neologism of the "triple helix" is as woven through the text of Magic as it apparently is through history, and while the broad contours of the concept aren't necessarily erroneous, they can serve to obscure as much as illuminate. The difficulty with the concept is neither that its too sweeping (for academe could benefit from more ambition) nor that it gives weight to divergent epistemologies. Rather the problem is that these terms are inexactly used. Both "science" and "religion" are of course variable concepts with complicated genealogies; as deployed by Gosden, however, and the former seems to broadly mean "empiricism" (which is notably simpler than the strict definition of science), and "religion" which he defines as involving belief in deities combined with hierarchical organization. Both of these concepts are, of course, far more complicated than how they're used here, and more variable as well (though he acknowledges that later point). While the spirit of the triple helix is well taken – that any epoch is defined by a complex relationship between ways of understanding that are both literal and symbolic, both rational and aesthetic – the fuzziness of the metaphor betrays its utility.

Regardless, Magic is a welcome introduction, and in collating such a variety of examples from so many different cultures, Gosden provides convincing evidence for his claim that "magic was not marginal or dubious but central to many cultural forms." There is an enchantment to Gosden's enthusiasms, and more importantly to the copious cases which he provides. The technocratic partisans might have it that magic is simply cock-eyed superstition, hoaxes on the credulous, but Gosden rightly elevates it to any of the great explorations of meaning which mark our species, from philosophy, to art, to literature. Most evocatively, he argues that magic might supply an invaluable metaphysic that coolly rational science and technology are lacking, one that could be particularly crucial in the warming days of the Anthropocene, writing that "Magic encourages a holistic view of human beings, linking them to the planet through practical and moral relationship. At a time when we need positive and holistic planetary thinking, magic has much to offer." It's a fascinating claim, and one which I hope that Gosden takes up in some future study.

For the casual reader, it might be hard to see how seventeen dolls in Scotland have much to do with planetary survival, but a reading of Magic will show how the most varied of practices – painting a buried Neolithic body with red ochre, divination from the stars, erecting circles of stones on a green field somewhere – are connected to an understanding of life, consciousness, and reality where humanity is not separate from the wider world, but an intrinsic part of it. "Magic offers the possibility of a communal life – a life lived together with all the cosmos," he writes, and indeed the disenchantments of rationality have alienated us from the wider universe, making us observers rather than agents (even as we irrevocably destroy our environment). Gosden writes that a "truly open community is hard to obtain or sustain, but the need to cool the planet and live in a greater state of equality is urgent… Magic allows for a sense of kinship with all things, living or not. And with kinship comes responsibility."

As a model for that sort of perspective, consider a site some five thousand miles to the east of Arthur's Seat, on an arid plateau in Turkey named Göbekli Tepe. There, in 1994, archeologists discovered one of the most astounding of prehistoric sites, a complex of stone columns, pillars, and altars at least eleven thousand years old. Anonymous artists rendered stone depictions of lizards and birds, bulls and foxes, in a structure which some have argued is the earliest temple. The nature of the faith of those who worshiped here is hidden beyond the veil of deep history, and yet the sculptures rendered seem to evidence an almost transcendent sense of humanity's place in nature. Amazingly, Göbekli Tepe predates agriculture, the temple constructed by nomadic hunter-gatherers. There is evidence that local agriculture developed specifically to feed and house those who built and then visited Göbekli Tepe, so that magic was a prerequisite for the emergence of civilization itself. A certain irony that magic inadvertently led to the system of organization which eleven millennia later pushes us to the precipice of ecological collapse, so much so that there is a poetic justice if some modern version of the faith of Göbekli Tepe – which understands humans as being both in and of nature – is responsible for our environmental redemption. Magic may yet protect us from our own blasphemies against nature's sacred order.