"The Man Who Ran Washington: The Life and Times of James A. Baker III" by Peter Baker and Susan Glasser 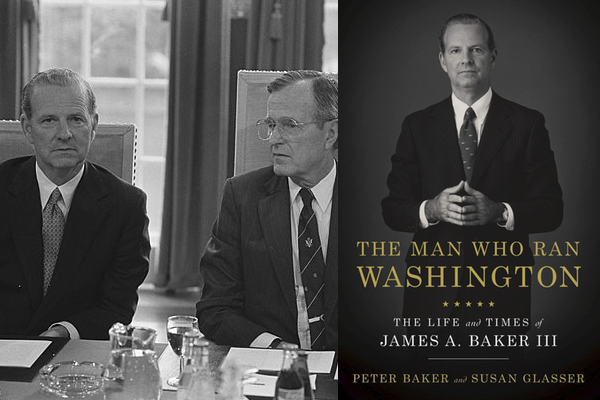 He was dubbed the “velvet hammer,” the “handler,” and the “ultimate fixer” by the national news media. Canadian trade negotiators, disconcerted by his hardline tactics and frequent use of profanity, had a less flattering nickname: “Texas crude.”

For 12 years, from 1980 to 1992, James A. Baker III operated as one of the most powerful non-elected officials in Washington, serving first as President Ronald Reagan’s chief of staff and later as his secretary of the treasury. But Baker is best known for his four years as secretary of state under President George H.W. Bush.  Working closely with Bush, a close friend, he negotiated major arms control agreements and maintained stability in Europe as the Soviet Union crumbled and Germany was re-unified.

A deft administrator, he readily adapted to new bosses, working for three different presidents. He was respected by Democrats, winning confirmation as secretary of state in 1989 with a 99-0 Senate vote.

But who exactly was he and what did he stand for?

A new biography by Peter Baker (no relation), a New York Times political reporter, and New Yorker staff writer Susan Glasser (a husband-and-wife team), provides a detailed (and at times hour-by-hour) accounting of his service in three administrations. The biography, written with Baker’s full cooperation, offers some fascinating accounts of the fierce debates conducted within the Reagan administration by ambitious aides who were given broad responsibility over policy matters by an elderly president.

Yet despite the detailed accounts of White House discussions and personality clashes (e.g. feuds with Ed Meese and Dan Quayle), James Baker emerges as an enigma, a man with few core principles, other than a drive to continually maximize his own power.

James Baker embodies Hofstadter’s definition of the professional man. He was always goal-oriented, a master of tactics, not particularly concerned with (in the words of President Bush) “the vision thing.”

As secretary of state, he spent 283 days out of the country, traveling more than 700,000 miles on his Air Force plane, but he showed little interest in the culture of foreign countries. He rarely left the U.S. embassy to engage in local sightseeing or meet with artists or writers.

Baker was born in 1930 to a wealthy, powerful family. His father was the lead partner at Baker Botts, a prominent Houston law firm with a client list filled with big oil and gas companies. Baker grew up in a Texas that was deeply segregated and run by southern Democrats.

He attended Princeton and the University of Texas law school, where he showed little interest in politics.  He was a registered Democrat until he made a close friend in 1957 at the Houston Country Club: George H.W. Bush. The son of U.S. Senator Prescott Bush (R-Connecticut), George harbored a lifelong interest in politics. He successfully ran as Republican for a Houston-based congressional seat in 1966, in a state that was dominated by conservative Democrats.  In 1970 he was urged by the national Republican Party to run for the U.S. Senate, and enlisted Baker to help manage his campaign in the Houston region.

Bush lost that race to Democrat Lloyd Bentsen, but won more votes than expected. Bush was rewarded by being appointed as Ambassador to the United Nations by President Nixon.  At the Republican National Convention in 1972, he introduced Baker to Nixon and his cabinet. In 1975, Baker was named undersecretary for the Commerce Department by President Gerald Ford.

In 1980, he was tapped by his close friend, George H.W. Bush, to be his campaign manager as he sought the Republican presidential nomination. Although Bush won primary contests in Iowa and Pennsylvania, he lost most of the others to the popular Reagan. But thanks to careful maneuvering by Baker, Bush was selected by Reagan as the vice-presidential nominee.

Baker impressed Reagan, his wife Nancy and top Reagan aides, with his dogged determination masked by a soft Texas drawl — the velvet hammer approach.  He was rewarded by being named as Reagan’s chief of staff.

As the administration’s top gatekeeper, Baker had to manage a fractious staff that included men with large egos such as Alexander Haig, Ed Rollins and Ed Meese; at the same time he fended off criticism from hard-right conservatives like Richard Viguerie. Reagan, aged 69 when inaugurated, sometimes dozed off at long meetings and was happy to delegate the nuts and bolts of policymaking to Baker.

Today, Reagan is best known for “Reaganomics,” a series of tax cuts that benefited wealthy Americans and triggered our nation’s huge rise in income inequality. But as the authors of The Man Who Ran Washington show, Reagan’s policies were often enacted with the help of leading Democrats, who controlled the House during all eight years of the Reagan administration. Baker proved a masterful negotiator with Democratic leaders Tip O’Neil and Dan Rostenkowski, conceding minor points to let them save face, while holding firm on principles he knew were important to Reagan.

In 1988 Baker managed George H.W. Bush’s 1988 campaign against Michael Dukakis. He opposed Bush’s selection of Dan Quayle as running mate, but Bush overrode him. This led to four years of animosity between the new vice president and Baker, now secretary of state.

Bush’s 1988 campaign repeatedly attacked Dukakis, with the controversial Willie Horton ad a particularly low blow. The ad, criticizing Dukakis for a Massachusetts state prison furlough program, featured the face of Horton, a black convict who was released and went on to rape a white Maryland woman and stab her boyfriend.

While Baker did not create the ad (it was produced by an outside PAC), he never disavowed it, despite widespread criticism that it depicted terrible racist stereotypes. He told the authors he had no regrets: “We won a big victory. The name of the game is to win ethically and I think we did.”

So how does Baker view Donald Trump, who won the 2016 nomination after ridiculing Florida Governor Jeb Bush and President George W. Bush, the beloved sons of Baker’s close friend?

At the request of Paul Manafort, James Baker met Trump in May 2016 in Washington. He presented him with a two-page memo that recommended Trump avoid isolationist talk, stop criticizing NATO, and work for a new nuclear arms control treaty.  Trump, of course, took none of that advice. Baker, sensitive to the Bush family’s wishes, ultimately declined to publicly endorse Trump, but he told the authors he did vote for him, saying that the billionaire was a conservative, “even if he’s crazy.”

It has been forty years since Reagan was first elected in 1980, yet the effects of his administration — including massive gains by the wealthy at the expense of the poor and the weakening of labor unions — continue to impact our nation today.

The Man Who Ran Washington offers an insightful look at “the velvet hammer,” a man who worked the levers of power for three Republican presidents and has no regrets on how he did it.