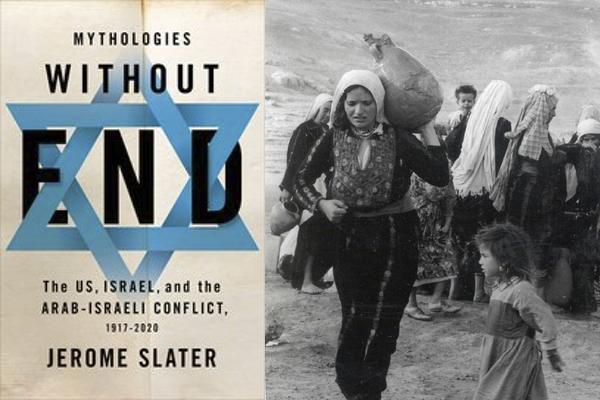 Every nation has a narrative or stories about its history that are instilled into its citizens, generation after generation. The narratives explain much about a nation’s motivations, policies, and actions. In order to understand why nations behave as they do, then, it is essential to know what they believe about their history. However, no matter how sincerely and deeply held, national narratives often--perhaps typically--are misleading or simply untrue, embodying as they do mythologies that cannot stand up to serious examination.

Perhaps in no other major international conflict has the gap between opinions –or “myths,” as in this context I shall call them--and demonstrable historical facts been as great as they are in the Arab-Israeli and the Israeli-Palestinian conflicts since the early 20th century. As a result, perhaps in no other international conflict have these myths, which still dominate Israeli and U.S. political discourse, had such devastating consequences for both peace and justice.

In my book, I review and challenge many of the myths, presenting the evidence that refutes them. Here I can only very briefly summarize the myths and my arguments on why they are false. The persuasiveness of these arguments, of course, rises or falls on the nature of the relevant evidence that I develop in the book.

In the Israeli narrative, the Zionists before and after the founding of the Jewish state were willing to share or partition the historic land of Palestine, a compromise rejected by the Palestinians and the leading Arab states, who then launched a war of annihilation against the newly established state. Despite the Arab attack and subsequent Palestinian terrorism, the narrative continues, Israel continued in vain to seek compromise settlements and was forced to defend itself against unprovoked Arab attacks in 1956, 1967, and 1970–73. After their repeated defeats, Egypt and Jordan finally decided to reach peace settlements with Israel, but the rest of the Arab world, particularly the Palestinians, continued to seek the destruction of the Jewish state, primarily through terrorism. While there are some elements of truth in this narrative, most of it does not stand up to historical examination, as is discussed in detail in my new book. Yet, the widespread acceptance of the Israeli mythology has had devastating consequences have been devastating—and not only to the Palestinians but to the Israelis themselves.

One of the most enduring Israeli myths is that until recently most of the Arab states as well as the Palestinians refused to compromise with or recognize the existence of Israel. In 1973 Abba Eban, the eloquent Israeli diplomat, famously said: “The Arabs never miss an opportunity to miss an opportunity,” an argument—better said, a myth--that was widely accepted and continues to have a huge impact on how the Arab-Israeli conflict has been understood in Israel, the United States, and most Western states. But that assessment was wrong then, and wrong since—if anything, the converse is closer to being the case.

The historical record demonstrates that it is Israel, not the Arabs, that has been primarily responsible for the many lost opportunities for peace from 1947 through the present. At one time or another, all the important Arab states and the most important Palestinian leaders have been ready to agree to compromise settlements of all the central issues: the legitimate territory and boundaries of Israel, the creation of a Palestinian state, the sharing of Jerusalem, and a realistic resolution of the Palestinian refugee problem.

Since 1948 there have been open wars or armed clashes between Israel and the Arab states, the PLO, and the militant movements Hezbollah and Hamas, as well as a 15 year blockade of Gaza by Israel. None of these wars and lesser conflicts, probably even the 1948 “Israeli War for Independence,” were unavoidable. Justice would have been served and Israel’s independence and security could have been protected had it accepted reasonable compromises on the four crucial issues of the Arab-Israeli and Israeli-Palestinian conflicts: a partition of the historical land of Palestine; Palestinian independence and sovereignty in the land allotted to them in the 1947 UN partition plan, including Arab East Jerusalem; the return of most of the territory captured from the Arab states in the various wars; and a small-scale symbolic “return” to Israel of some 10,000-20,000 Palestinian refugees (or their descendants) from the 1948 war.

In the past, the Arab-Israeli state conflict not only led to wars in the Middle East but on several occasions threatened to escalate into direct confrontation between the United States and the Soviet Union, making that conflict one of world’s most dangerous ones. In light of the increasing movement of the Arab states toward acceptance of Israel, the threats to world peace have subsided. On the other hand, the Israeli-Palestinian conflict has continued, and it is hardly out of the question that it could precipitate another war—or even an unimaginably catastrophic disaster if undeterrable fanatical Arab terrorist groups come into possession of nuclear weapons.

The U.S and the Arab-Israeli Conflict

Throughout most of the period since 1947, especially since the 1960s, the United States has provided nearly unconditional support of Israel. While in many ways admirable, the downside has been that it has enabled Israel to spurn repeated opportunities for peaceful settlements of its conflict with the Arab world, secure in the knowledge that even when American governments have disagreed with hardline Israeli policies, they only rarely have been willing to press for changes in them.

US support for Israel has been a consequence of a number of factors, including the belief in a post-Holocaust moral obligation to support a Jewish state and a shared a commitment to democracy and the “Judeo-Christian heritage.” Beyond such moral or religious factors, obviously American domestic politics have played a major role, in particular because of strong public support for “pro-Israel” policies and the political power of the “Israeli lobby,” as it has been widely termed. Finally, US policies towards Israel have been a function of the belief of most American presidents, congressmen, and other public officials that support of Israel was in the American national interest.

In its discussion of the US-Israeli relationship, my book focuses particularly on the national interest argument—the standard near-axiomatic belief that an anticommunist and militarily powerful Israel was a strategic asset for the United States during the cold war and is now an indispensable ally in the struggle against Islamic radicalism and terrorism.

During the cold war the Arab-Israeli conflict became entangled in the global rivalry between the US and the Soviet Union. American policy- makers believed that the Soviets sought to exploit the Arab-Israeli conflict in order to drive the West from the Middle East and dominate the region. To prevent that, the US sought to end Soviet influence there and exclude it from all efforts to reach a negotiated settlement.

The weight of the evidence concerning Soviet goals in the Middle East, however, demonstrates that the Soviet role was essentially defensive and reactive. Indeed, increasing US ties with Israel actually opened the door to Soviet influence, as the leading Arab states, especially Egypt, turned to the Soviets for military assistance. US support of Israel and its growing power in the region, then, gave the Soviets both the motive and the opportunity to acquire its own allies in the region. Moreover, on several occasions during the 1970s the Soviets proposed joint superpower-guaranteed or comprehensive peace settlements of the Arab-Israeli conflict--on terms that protected Israeli national security, though these were spurned by the US.

Since the end of the Cold War, and particularly since September 11, 2001, the United States has defined its primary national interest in the Middle East as fighting Islamic radicalism. The dominant assumption among US policymakers has been that Israel is a major asset and ally in this “war against Islamic terrorism,” notwithstanding a contrary view, supported by the repeated statements of the architects of the 9/11 attacks that US support for Israel in its conflict with the Palestinians was the major reason for the 9/11 attacks.

Perhaps it could be argued that Israel’s military power is so valuable to the US that it outweighs the costs of our support of Israel. However, in practice, Israel’s vaunted military strength has proven to be of little or no value to the United States. For example, when this country went to war against Iraq in 1991 and 2003, it not only didn’t need, but actively discouraged, a direct Israeli military contribution. The policy assumption was that the military value of whatever assistance Israel could provide would be far outweighed by its political costs, particularly in terms of gaining the support or at least acquiescence of America’s major Arab allies in the Middle East.

Today, the only truly vital national interests of the United States in the Middle East are to avoid either being drawn into regional conflicts or becoming a target for terrorist attacks, especially by weapons of mass destruction. Both of those interests are harmed, not furthered, by US support of Israel in its continuing conflict with the Palestinians.

Where Do We Go From Here?

As a result of Israeli intransigence in its conflict with the Palestinians and its support by the US government, the standard “two-state solution,” requiring an Israeli evacuation of the entire West Bank and East Jerusalem, is dead. The most common proposed alternative, the creation of a single binational Israeli-Palestine state—“Isratine,” it has been termed—is hopelessly utopian and has even less chance of materializing than the two-state solution. For these reasons, efforts to finally settle the Israeli-Palestinian conflict should focus on the creation of a mini-Palestinian state in the Gaza Strip and the areas of the West Bank containing most of the Palestinian people—areas over which Israel has no desire to directly rule over, let alone annex into a “Greater Israel.” While such a Palestinian mini-state would face many problems and fall far short of genuine justice for the Palestinian people, it is probably the only realistic alternative to continued Israeli occupation and repression.

US policy should focus on bringing about such a settlement, employing various political, diplomatic, and economic incentives and disincentives, carrots and sticks, that might bring about an Israeli agreement to the establishment of a Palestinian mini-state, if not by the present Netanyahu government, than perhaps by a more moderate and reasonable one in the near future.

This essay is adapted from Jerome Slater's Mythologies Without End: The US, Israel, and the Arab-Israeli Conflict, 1917-2020, published by Oxford University Press.