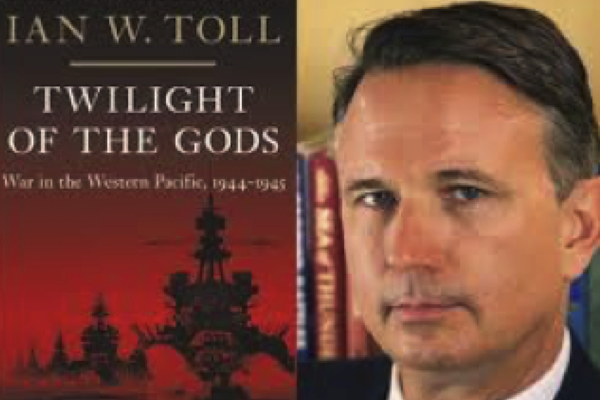 Books about World War II generally fall into two categories. The first is the hour-by-hour account of individual battles, often told via accounts of individual soldiers. One example is Eugene Sledge’s With the Old Breed: At Peleliu and Okinawa, which was the basis for the HBO mini-series The Pacific.

The second type is the “big picture” or strategic view, such as A World at Arms: A Global History of World War II, by Gerhard Weinberg.

Ian W. Toll’s unique approach is to skillfully interweave narratives of the bloody, on-the-ground combat with an in-depth look at the Washington D.C. decision-makers who picked the commanders and determined long-term strategy.

Twilight of the Gods is the last of Toll’s magisterial, three-volume account of World War II in the Pacific. His first two volumes covered the earlier years, Pacific Crucible: War at Sea in the Pacific, 1941-42 and The Conquering Tide: War in the Pacific Islands, 1942-1944.

Why did we make our first stand against the Japanese at Guadalcanal and not another island? Why did Iwo Jima cost so many Marine casualties? And why was the Japanese Zero so deadly in the first years of the war? Twilight of the Gods answers these questions and gives the reader thrilling eyewitness accounts of the major battles of the war’s last year.

Toll has an unusual background for best-selling historian. After graduating with master’s in public policy from the Kennedy School of Government at Harvard University, he served as a political aide to U.S. Senator Paul Sarbanes and a New York lieutenant governor. He then worked as an equity research analyst at three major investment banks before quitting to become an author.

Q. Twilight of the Gods is one of the few WWII histories in which the author includes both detailed battle scenes (e.g. Iwo Jima) and a “macro view” of the strategic discussions by FDR and the Joint Chiefs.  What were your challenges in accomplishing this?

A. While researching my first book, Six Frigates, I concluded that a history of naval operations for that period was insufficient. I had to tell the entire story of the early American republic, its major political and diplomatic challenges, order to place the military history in context. The dilemma was essentially the same for my Pacific War trilogy. I believe that military histories have tended to take a “stay in your lane” approach, adhering to accounts of battles and operations. I prefer to weave the strands of politics and foreign policy into the fabric of the narrative.

Q. You did not start writing history books until you’d successful careers in two other fields. Why such a late start?

A. I had always wanted to be a writer, since childhood; and I had always been a voracious reader of history. In 2002, I had read almost everything there was to be found on the early American Navy, and I came to believe that there was a very good book that had not yet been written. I left my job (in banking) after 9/11, wrote a first chapter and a book proposal for Six Frigates, and to my surprise the book was acquired by a major trade publisher, W.W. Norton.

Q. WW II is now 75 years distant, yet it remains fascinating to Americans in way that more recent wars (e.g. Korean War, Vietnam War) are not. Is this because the war was so large, or because America seemed more “united?”

A. The Second World War was the largest and bloodiest conflict in human history, and for that reason alone it commands more attention than regional wars such as those in Korea and Vietnam. But I think you are right in suggesting that we tend to see the war as a contest between good and evil, and that enhances its appeal and fascination, particularly to Americans and our allies, the British.

Q. One of the most interesting figures portrayed in your trilogy is Admiral Ernest J. King. In your books he emerges as a key architect of victory in the Pacific and an individual who excelled at picking the commanders who operated underneath him.  He has been less favorably portrayed in other WW II histories. What factors caused you to rate him so highly?

A.  It seemed obvious to me that Ernest King did more than any other American military figure to shape the course of the Pacific War, but he is barely remembered at all by those who are not aficionados of World War II and naval history. Admiral King kept a low-profile and did not seem much interested in leaving his mark in history.

This is a larger issue, generally, for historians and biographers -- figures who shy away from publicity and do not take much of an interest in promoting their own place in history tend to receive less attention than those who seek more attention. The Pacific War provides many good examples. Why are there so many biographies of Admiral Bull Halsey, but only one on Raymond Spruance, who was a better fleet commander? Why does everyone know George S. Patton, while many have forgotten the 5-star general Omar Bradley, who stood above him in the chain of command? Historians and biographers should not allow themselves to be led astray by disparities in 1940s-era publicity.