Historians in the News
tags: obituaries 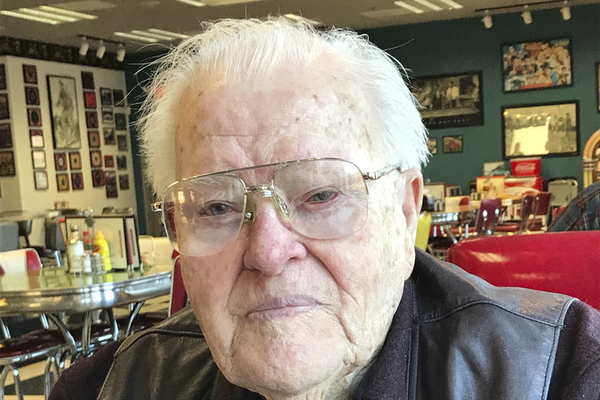 Vaughn Davis Bornet, research historian and scholar, of Ashland, Oregon, died on October 5, 2020 before reaching 103.  Dr. Bornet was preceded in death by his father and mother Vaughn Taylor and Florence Davis Scull Bornet.  His wife of 68 years, Beth W. Bornet, died Thanksgiving, 2012.  Born in Philadelphia in 1917, he lived where Life took him. In HS he was a cornetist, tennis player, and AM paperboy. His education was at Emory, UGA, and finally Stanford (1951).  He served in the Navy 4 years, 4 months in World War II; staying in the Naval Reserve program 23 years, rising from Yeoman 1c to CDR.  He served with Naval Intelligence, the Gulf Sea Frontier, and was three years Fleet Barracks Officer, NAS Alameda. While there he wrote a book, Barracks Administration. He worked with Mercer University 6 mo., taught at University of Miami, 1946-48 and was Professor of History and Social Science at Southern Oregon College, 1963-80 and Chairman of the Social Sciences Division for 14 years.

In research, writing, and speaking Bornet was an innovator. His book Labor Politics in a Democratic Republic gives equal space to four parties. California Social Welfare (a three year Commonwealth Club project) pioneered.  Welfare in America (on a Volker Foundation grant) refocused nationally.  In 1976 he co-authored Herbert Hoover: President of the United States, (first to use Hoover’s archives).  In 1983 he finished The Presidency of Lyndon B. Johnson after years, suggested in vain by Kansas Press for the Pulitzer.  His illustrated 415 page autobiography, Learn and Create (2019) has 60 illustrations and uniquely traces Bornet’s “Long Life” through 101 years. It’s a Dog’s Life and I Like It! is soon to be released.  Speaking Up for America offers Valley patriotic orations beginning in 1963. Leaders and Issues at Southern Oregon College, 1963 to 1980 is on SOU’s website. Interesting books appearing late are Lovers in Wartime, 1944 to 1945; Happy Travel Diaries, 1925 to 1933; An Illustrious Cavalier’s Character; Seeking New Knowledge: A Research Historian’s Rewarding Career; “That Trump!” is in Print, EBook; well-reviewed by John Darling of Ashland.

At SOC he taught summers, 23 different courses.  Regularly came American diplomacy, first in Oregon, The Environment (starting 1964), The International Scene, and new The American System.  He was always on the student’s Lectures Committee.  He created the Law Enforcement program, getting SOC Library funding for that and Nursing, and presided over a half dozen Social Sciences departments.

For ten years Bornet engaged in full time research for The RAND Corporation, the Encylopaedia Britannica, the American Medical Association, and on solid grants.  After two years of NYC committee work (flying from LA) he drafted The Heart Future for the American Heart Association, being honored with its Distinguished Service Award, Oregon’s also.  He served nearly two decades on Oregon’s Advisory part of the U. S. Civil Rights Commission. For two years he was president of the Southern Oregon Symphony Association and was an Ashland Rotarian over 50 years.  Bornet was a Sigma Chi (“Significant Sig”), an Emory honors graduate.

He edited at length the famous books of others:  best selling textbook Thomas A. Bailey, The American Pageant; pioneering Herman Kahn, On Thermonuclear War; and Edgar Eugene Robinson’s critical The Roosevelt Leadership, 1933 to 1945. There were articles and reviews for scholarly journals. In retirement he wrote controversial essays for History News Network, such as Thinking About the Iraq Situation; When the Space Race Began;  Republican, Democrat, or Independent?; a memoir of race relations, a judgment on use of the atom bomb, an endorsement of Moderation in politics, and much advice. His Bibliography reached 16 pages, including a vocabulary of Thermonuclear War.

Bornet's archives are on deposit at Hoover Presidential Library, Bancroft Library (UC), Univ. of Minnesota, and Wisconsin State Hist. Society.  In 1952 he intervened to save the AFL-CIO archives. His long website CLIOISTICS.com offers several thousand pages of Bornet’s published articles. (An 18 page list of titles appears in the bio.)  The family participated with Rogue Yacht Club. He was proud of his children’s honors in scouting and their solid careers. Dr. Bornet’s bio is in Who’s Who in the World and in America.