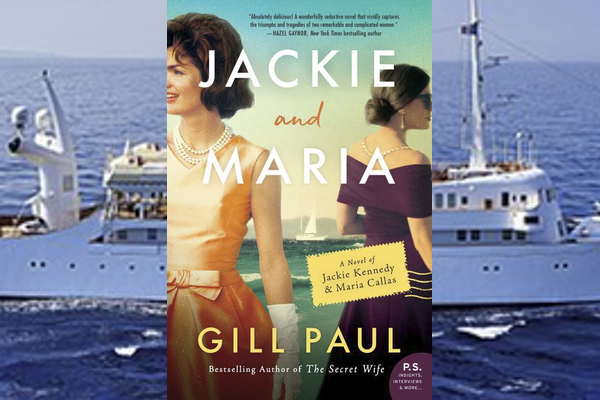 Jackie Kennedy was an intelligent, well-educated woman, who spoke four languages and read widely, so it’s problematic for modern, liberated women to think that she made her matrimonial choices based on a man’s income. Should we place her in the same category as, say, Playboy Playmate Anna Nicole Smith, who married an 89-year-old petroleum tycoon?

The press were in no doubt about Jackie’s motives when news broke in October 1968 that she was to marry Greek shipping millionaire Aristotle Onassis, 23 years her senior: “Jackie Marries Blank Check” read one headline. Onassis’s daughter Christina and son Alexander referred to her from the start as ‘The Gold-digger’.

When I decided to write a novel about Jackie Kennedy, this was one of the problems I had to solve about this enigmatic, fiercely private woman. After JFK’s death, she was pursued by several men aside from Onassis: architect John Warnecke, attorney Ros Gilpatric, and British diplomat David Ormsby-Gore amongst them. Which did she choose to marry? The richest.

From the outside, it doesn’t look like a love match. For most of their six and a half year marriage, they lived on opposite sides of the Atlantic. Jackie spent school term-time in New York, where her children were being educated, while Onassis was in Europe, running his businesses. During the summer holidays they were together on Skorpios, his private island in the Ionians, but when he came to New York, he stayed at his suite in the Pierre Hotel rather than her apartment.

They didn’t have much in common, beyond a love of fine living. Onassis didn’t read books and wasn’t college-educated, although he was a shrewd graduate of the school of life. His humour was bawdy and his taste in the arts questionable. Some biographers quote unnamed friends as saying that Jackie had a satisfying sex life with him, but Onassis was prone to planting stories about his sexual prowess in the press and Jackie chose friends for their discretion, so I’d take this with a pinch of salt.

After his death in 1975, Jackie chose her words carefully in her press statement: “Aristotle Onassis rescued me at a moment when my life was engulfed with shadows… We lived through many beautiful experiences together… for which I will be eternally grateful.” Word was leaked to the media soon afterwards that Onassis had been taking steps to divorce her, and trying to limit the amount she would inherit from his estate. Were they ever in love? There’s no evidence for it.

Biographer Barbara Leaming makes a convincing case that after Dallas Jackie was suffering from post-traumatic stress disorder, which flared up following the assassination of Bobby Kennedy. In the backdrop were countrywide race riots in the wake of Martin Luther King’s assassination, and she received several FBI tip-offs of death threats against her children. “They’re killing Kennedys; my children are Kennedys,” she is quoted as saying. She, John and Caroline each had a Secret Service protection officer but the security must have felt inadequate. Every photographer who took a picture of them in the street could have been a gunman. She married Onassis four months after Bobby was killed and the enhanced protection his money could buy definitely seems to have been a factor.

On top of that, it’s well documented that Mrs Kennedy had a Class A shopping addiction, with roomsful of purchases at her Fifth Avenue apartment that she never even removed from their boxes. The generous monthly allowance from Onassis must have been very welcome. Before her second marriage, she had been dependent on the Kennedy family topping up Jack’s pension from the US government, but their money came with strings attached. For one, they had expected her to stand on podiums and offer support when Bobby was running for office, and Jackie was weary – and scared – of the political limelight.

She told friends she’d had enough of being placed on a pedestal as America’s grieving widow. Marrying Onassis was one sure way to topple herself, because his reputation in the US was checkered, following some shady dealings in his shipping empire, for which he pled guilty to a minor charge in 1955. By marrying him she could leave behind the country in which Jack and Bobby were shot and make a new home for herself overseas… Except that she didn’t. She stayed in Manhattan, a few minutes’ walk from the prime shopping area.

All the evidence seems to indicate that Jackie did marry Onassis primarily for his money. That’s how she had been raised. As a teenager she had loved the substantial increase in disposable income and material comforts that came from her mother’s second marriage to the very wealthy Hugh Auchincloss, but she was well aware that the children from his first marriage would inherit his fortune. How could she continue to live in the style to which she had become accustomed without a sizeable inheritance?

In 1950, only 26 per cent of married women worked outside the home, and most of them only because of economic necessity. Husbands were seen to have failed in their role as providers if wives went out to work. Women who wanted a cossetted lifestyle didn’t get a job – they got a rich husband.

Attitudes changed over succeeding decades with the spread of feminist ideas, but Jackie’s didn’t. In her memoir Touched by the Sun, Carly Simon says that in 1987 Jackie advised her not to marry her second husband, James Hart, because he was cash-strapped while struggling to establish himself as a writer. “Carly, you will never respect a man who doesn’t take care of you,” she reports her as saying, adding that they didn’t see eye to eye on such matters.

In Reading Jackie (2010), William Kuhn discusses a book called Indian Courtly Love, which Jackie commissioned while working as an editor at Doubleday. Indian courtesans were described as a type of high-class prostitute who could never be fully possessed by their clients. Kuhn asked Edith Welch, a friend of Jackie’s, with whom she had travelled to India, if Jackie had perhaps acted like a courtesan in her relationships with the three wealthy partners in her life: Jack Kennedy, Aristotle Onassis and Maurice Tempelsman. “You might have something there,” Edith replied.

Jackie is an enduring icon who feels modern in many ways, and that means we have a tendency to judge her by the standards of the 21st century. But she was born in 1929, only nine years after the Nineteenth Amendment gave American women the vote. She did work briefly before her marriage to Jack Kennedy but wasn’t employed again until after Onassis died in 1975, by which time the stigma about married women working had lessened.

We think of her today as a style icon, a Former First Lady, the woman in a pink suit and matching pillbox hat who was sitting beside her husband when he was assassinated in Dallas, and then as an influential book editor… Sure, she was all of these things, and she was also a woman who married for money.