Guy Laron is a senior lecturer in international relations at the Hebrew University, and is the author of The Six-Day War: The Breaking of the Middle East. 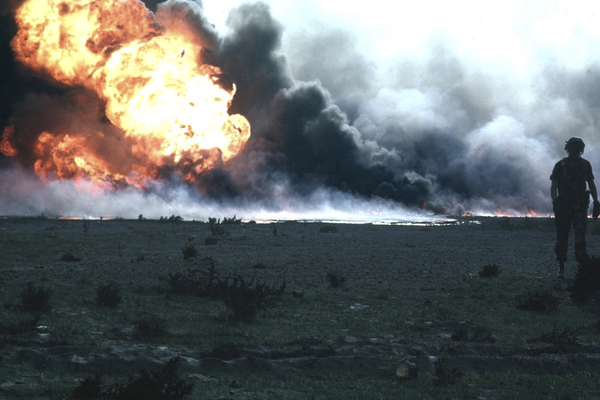 In the summer of 1990, Iraq was on the verge of bankruptcy and already in arrears on payments to several international creditors. It responded to its predicament by invading its southern neighbor, Kuwait. Thus started a long international crisis. It ended only after the onset of a US-led military campaign in mid-January 1991 to liberate Kuwait.

The 1991 Gulf War brought an ignominious defeat to Iraq which diminished its regional status and weakened the regime of Saddam Hussein, the Iraqi President. Contemporaries could only surmise that this chain of events was the act of an irrational dictator. Indeed, Saddam was often compared to Hitler. Yet once oil is introduced into the picture, it turns out there was logic, after all, to Saddam's madness.

Saddam's fate was intertwined with that of oil from the very beginning. The Iraqi Baath party, which Saddam led, came to power in 1968, exactly when oil prices started climbing up. In the preceding decade, industrialized countries came to rely on oil to meet their energy needs. World demand was surging as global capacity remained the same. The first to spot an opportunity was the Libyan junta which demanded in 1969 to receive 55 percent of the profits on its oil (up to that point profits were divided evenly between the hosting government and the corporation which pumped the oil out of the ground). In 1972 Iraq nationalized its oil industry and gained full control over its revenue. A year later, the Organization of Petroleum Exporting Countries (OPEC) reacted to another round of Israeli-Arab fighting by cutting production quotas and raising prices. The revolution in Iran in 1979 temporarily removed Iran's oil from the market, causing panic in Western countries. Lines starched for hours in gas stations across the developed world.

As a result, during the 1970s the price for a barrel of oil shot up from $3 to $30. The impact on Iraq was dramatic. State revenue from oil rose from $487 million in 1968 to $12.2 billion in 1979. All this came at an opportune time for Saddam. He needed the money to overcome several thorny issues. There was an on-off Kurdish rebellion in the north where major oil fields were located. Iraq's other oil fields lay in the south which was dominated by Shiites, the country's majority population, who were also suspected in scheming against the government. Sunnis such as Saddam resided in the center of the country, yet he did not even represent them. Most of the senior officials and officers in the Saddam administration hailed, like their president, from the same tribe residing in the environs of the city of Tikrit. How could one man control such a divided country?

Saddam used the enormous resources at his disposal to either bribe or intimidate the Iraqi population. To those who were willing to support the regime, the state would offer full employment with decent pay by expanding the state bureaucracy and investing in a large military-industrial complex, petrochemical industry, and huge infrastructure projects. If that was not enough, the regime also provided low-cost loans for housing and higher education scholarships. The Kurds in the north, finally subdued in 1975 after a military operation, were offered social welfare handouts. Those who chose to resist the regime would face a vast secret police and a formidable army.

Trouble began in 1980 when oil prices started to fall. After a decade of high oil prices, industrialized countries shifted to other sources of energy such as coal, gas, and nuclear power. In 1986 alone the price plummeted from about $28 to $12 a barrel. OPEC was unable to stop this trend. It tried to dictate production quotas but had no mechanism to punish cheaters. Countries worried about losing market share, kept selling their oil no matter how low was the price.

For the time being, Iraq was shielded from the effects of the downturn. Throughout the years 1980 to 1988, Iraq received lavish subsidies from Saudi Arabia and Kuwait. This was the way in which these countries supported Iraq in its war against fundamentalist Iran whose attempts to export its revolution frightened governments across the region. However, when the Iran-Iraq war ended, Iraq had to face the music on its own.

By 1990 Saddam's patience was running thin. Another year of low oil prices could force him to cut the budget. He and his ministers had no doubt that should he do so, his regime would collapse. Saddam was nothing without the benefits he offered to his people.

In Saddam's view, the main culprit was Kuwait. Indeed, Kuwait was a consistent quota-cheater, selling every year about 1.5 million barrels of oil more than OPEC wanted it to. Unlike Iraq, which was wholly dependent on oil as it was its sole export product, Kuwait was also a processor and marketer of the black gold. It owned three refineries in Europe and 6500 service stations across the continent under the logo "Q8." Low oil prices helped attract customers to buy the products of its petrochemical industry and fuel at its gas stations.

Throughout the first six months of 1990, various Iraqi officials in a series of conferences and summit meetings tried to huff and puff Kuwait into submission. But oil sheikhdom seemed defiant. By June, Saddam had ordered the Republican Guard to prepare for an invasion and two months later Iraqi tanks rolled into Kuwait City. Had Saddam succeeded in annexing Kuwait, as he had intended, Iraq would have turned into an oil superpower, equal in its weight to Saudi-Arabia. Then Saddam could try and whip OPEC into shape and dictate prices.

It was clear from the outset that this was a desperate gamble that put Iraq on a collision course with Washington. But Saddam believed he had no other choice. As one senior Iraqi minister summed it in January 1991: "if death is definitely coming to this people and this revolution, let it come while we are standing."