What Comes After the Fall of Pro-Slavery Monuments?

Ana Lucia Araujo is a historian and professor at the historically black Howard University in Washington DC. She is a member of the International Scientific Committee of the UNESCO Slave Route Project. Her next book, Slavery in the Age of Memory: Engaging the Past, will be out in October 2020. 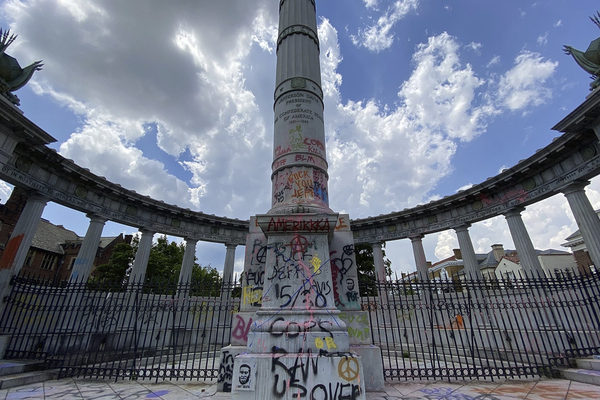 Many people still seem to be surprised that protests denouncing the murder of George Floyd have led to global demonstrations (and sometimes direct action) aimed at the removal of monuments that, until a few decades ago, were not publicly contested.

A number of educated Americans agree that Robert E. Lee and Jefferson Davis defended slavery and fought a war to preserve the inhuman institution. In European and African countries, many citizens recognize that Leopold II of Belgium was the notorious ruler of the Congo Free State. During his reign nearly 10 million inhabitants of the African state were terrorized, tortured, and murdered.

But in the last few weeks, US demonstrators took down statues paying homage to Christopher Columbus, a Genoese navigator who launched the European conquest of the Americas in the late fifteenth century. What is often omitted from the story is that he also drove the genocide of millions of Native Americans. This conquest eventually led to the massive import of enslaved Africans to the so-called New World.

In the UK, statues commemorating slave traders like Edward Colston and Robert Milligan were also toppled down or removed.

The founding fathers of the United States, who have been under scrutiny in the last few decades, were not spared either. A statue of Thomas Jefferson and another of George Washington were taken down in Portland, Oregon.

Surprisingly, many citizens did not even know who the men were who are represented in these monuments. Most are just now learning that these statues, erected several decades ago, pay homage to men who promoted slavery, genocide, and colonialism.

Despite current disbelief, toppling down and removing monuments is nothing new.

In the Americas, since the American Revolutionary War, and in Europe, during the French Revolution, there is a long history of taking down and removing monuments. The end of the Cold War and the fall of the Communist regimes in eastern Europe also propelled the removal of dozens of monuments memorializing leaders such as Lenin and Stalin. There is also a long tradition of creating new monuments in times of change.

What does the current global movement to take down statues honoring white men who supported human atrocities teach us? In nearly two decades studying monuments, memorials, and museums memorializing slavery in Europe, Africa, and the Americas, I learned several lessons. When groups decide to erect a monument to remember an event or a person from the past, they are always driven by present-day motivations.

Many historians have shown how countless Confederate monuments were created starting in the early twenty century. It’s never too much to repeat that groups such as the Sons of the Confederacy and the Daughters of the Confederacy commissioned and sponsored the construction of these monuments long after the end of the Civil War, when the memory of the Lost Cause of the Confederacy was at risk of fading. Their goal was clear. They were protecting white heritage during the Jim Crow era. By promoting their values of white supremacy and racial segregation in a period when African Americans were denied access to civil rights, they consolidated their power by imposing the presence of those who lost the Civil War in public space.

In other words, all monuments emerge and disappear because of political battles that take place in the public arena. Likewise, public memory is always political. And in the context of the Americas, it is always racialized because the groups who hold conflicting memories are built along racial lines. Monuments to Robert E. Lee, Jefferson Davis, and John C. Calhoun symbolize white heritage, a heritage that drew from slavery, white supremacy, and racial oppression. Like the pro-slavery white groups who created these monuments decades ago, white groups who associate themselves with this long-lasting tradition of racial oppression are the ones willing to defend these monuments today.

Lest we forget, in 2015, Dylan Roof murdered nine African Americans in Charleston. A few days before committing this mass murder, he posed with a Confederate flag in a series of pictures. In 2017, far-right and pro-Nazi armed groups went to Charlottesville, VA, to defend a statue of Robert E. Lee. One member of the mob assassinated Heather Heyer and injured dozens of others. In both cases, these individuals and groups promoted the idea that they were defending the cause of their ancestors. Instead they were defending present-day racism.

There is no doubt that these individuals and groups instrumentalized Confederate symbols to promote their present-day white supremacist agenda. That agenda became more radicalized after the first black president of the United States was elected in 2008, and more emboldened by President Trump’s support.

In 2020, more white Americans than ever before came to see Confederate monuments as shrines of white hate. Black people, however, never accepted symbols of white supremacy. It’s needless to state that these statues were constructed without consulting members of the black community, who could not even vote or use the same restrooms as white citizens by that time.

Historians Ethan Kytle and Blain Roberts showed how African Americans in Charleston protested the statue of pro-slavery propagandist John C. Calhoun since its inception, defacing the statue so often that it was placed atop an obelisk to thwart vandals.

The same occurred elsewhere. Starting in the 1990s, black Bristolians protested the omnipresence of statues, buildings, and streets paying homage to the British slave merchant Edward Colston, all over the city. Especially since 2015, South Africans started taking down statues representing the leaders of the colonial era and the Apartheid regime.

When these black citizens demand the removal of monuments paying homage to white men who defended slavery and segregation, they are not only arguing about events that happened in the past, they are denouncing present-day legacies of this past, including their social and economic exclusion and racial violence that became so evident once again after the murder of George Floyd. These black and brown citizens, and their allies, are bringing to light that countries like the United States, England, and France, were built on the wealth generated by the Atlantic slave trade and slavery.

All these societies also emerged on the principles of white supremacy.

Because when black citizens open a textbook, visit a museum, or look at the statues displayed in the major squares of the main European and American capitals they only see images of white men, who were wealthy, who had power, and who very often were slave owners or slave traders. Then when black men, women, and children are challenging pro-slavery statues, they are denouncing this past that remains alive in the present. They are calling attention to their present-day economic and social exclusion.

I am convinced that the fall of pro-slavery monuments offers several opportunities to make amends for past atrocities.

First of all, it is time for the countries that practiced chattel slavery and participated in the Atlantic slave trade to formulate an official and formal apology to the descendants of enslaved people.

The White House recently improvised an Executive Order on Building and rebuilding monuments to American Heroes. Instead, the federal government, states, and municipalities should create commissions to evaluate the existing monuments and memorials. More importantly, they should lead a wide consultation of black and brown citizens to determine which monuments and memorials they want to create in their communities. The example of Lisbon, Portugal, which recently led a broad consultation regarding the creation of a slavery memorial can be a productive model to be followed.

As we can see, the removal of pro-slavery statues open up to a great number of alternatives to tell the true story about slavery and the populations of African descent not only in the United States, but also around the globe.