Fabio Toscano is a science writer for newspapers and television and is the author of many popular science books. His latest book, The Secret Formula: How a Mathematical Duel Inflamed Renaissance Italy and Uncovered the Cubic Equation, will be published by Princeton University Press on May 19. 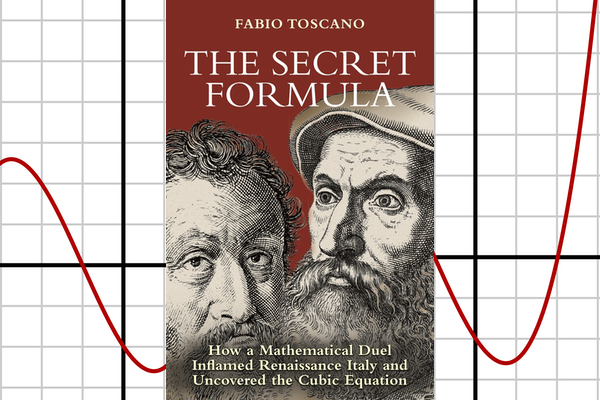 The Secret Formula is the story of two Renaissance mathematicians whose jealousies, intrigues, and contentious debates led to the discovery of a formula for the solution of the cubic equation.

Niccolò Tartaglia was an ambitious teacher who possessed a secret formula – the key to unlocking a seemingly unsolvable, two-thousand-year-old mathematical problem. He wrote it down in the form of a poem to prevent other mathematicians from stealing it. Gerolamo Cardano was a physician, gifted scholar, and notorious gambler who would not hesitate to use flattery and even trickery to learn Tartaglia’s secret. In this era when mathematicians challenged each other in intellectual duels held outdoors before enthusiastic crowds, their contentious relationship would change the history of mathematics forever.

Sixteenth-century mathematical duels had a long history, rigid procedures, and a lasting impact on the duelists’ standing in their communities. They also played a hugely influential role in the development of the history of mathematics.

When a duel was to take place, a mathematician or scholar would send another a list of problems to be solved in a given amount of time—the “challenge gauntlet”—after which the recipient would propose a further set of problems to his rival. Tradition required that in case of disagreement a public debate should be held in which the contenders would discuss the disputed problems and solutions in front of judges, notaries, government officials, and a large crowd of spectators. It was not unusual in those duels for tempers to flare, and personal abuse take the place of scientific argument. Admittedly, the stakes could be very high: the winner of a public mathematical duel—whoever had solved the largest number of problems— gained not only glory and prestige but possibly also a monetary prize, new fee-paying disciples, appointment (or confirmation) to a chair, a salary increase, and, often, well-paid professional commissions. The defeated contender’s future career, on the other hand, risked being seriously compromised.

At the beginning of 1535, Antonio Maria Fior began a dispute with Niccolo Tartaglia, challenging him to a mathematical duel to be conducted according to the rules of the time. He proposed thirty problems to Tartaglia, who in response sent the challenger thirty other questions. As was customary, the winner would be whoever answered the most questions in a given period of time. On February 22, 1535, Fior and Tartaglia entrusted their respective lists of questions to Iacomo Zambelli,a notary public in Venice, agreeing to hand over the solutions forty or fifty days later. The stakes of the contest? First of all, honor and reputation, and then a lavish dinner at the tavern for each unsolved problem, with the bill to be footed by the unfortunate contestant who capitulated before his rival’s question.

In the ensuing months, echoes of the Venetian challenge spread well beyond the city, carrying the news of its resounding outcome: Tartaglia had literally humiliated Fior by solving in a couple of hours all thirty problems posed by his opponent, while the latter had not been able to answer a single one of Niccolo’s questions (the victor, the story goes, magnanimously gave up his right to the dinners). In fact, far more astonishing was the topic on which Fior had challenged Tartaglia. Such details about the contest slowly trickled out of Venice and eventually reached Tartaglia’s birthplace, Brescia, causing many friends to reach out to him and confirm the details of the duel. One such acquaintance, the imperishable Messer Zuanne de Tonini da Coi, wrote:

I heard many days ago that you had entered into a challenge with Maestro Antonio Maria Fior, and that finally you had agreed on this: that he would propose to you thirty really different problems written under seal and in the custody of Maestro Iacomo di Zambelli, notary; and that, similarly, you would propose to him thirty other, truly different ones. And so you did, and each of you was given forty or fifty days to solve the said problems; and you established that, at the end of this period, whoever had solved the largest number of problems would receive the honors, in addition to whatever small sum you had waged for each problem. And it has been reported and confirmed to me in Brescia that you solved all his thirty problems in two hours, which is something I find hard to believe.

“Everything you have been told is true,” replied Tartaglia, who right away explained how and why he had been able to perform a feat that was to be the peak of his scientific career and a decisive turning point in the history of algebra.

According to this account, Niccolo Tartaglia discovered the formula for the solution of third-degree equations of the type x3 + bx = c on February 12, 1535, a formula that a few years later would prove crucial for solving any cubic equation. It was an epoch-making, extraordinary result: the first true algebraic discovery since the time of the Babylonians, one that would open up new and boundless horizons for algebra and that posterity would remember as the most significant mathematical result of the sixteenth century.

A word of caution, however: Renaissance mathematical duels obeyed a gentlemen’s agreement: a contender could not propose to his opponent problems he did not know how to solve himself. Therefore, if Fior felt confident in challenging Tartaglia with problems involving cubic equations of the type mentioned earlier, then the Venetian abbaco master must have discovered the fateful formula before his Brescian rival—unless Fior had not played fair and sought to intimidate Tartaglia with problems beyond his own ability to solve, just as Tonino da Coi had done five years earlier. On the other hand, if we rule out this possibility, how could a teacher known only for being a good expert in accounting calculations—and, what is more, not particularly cultivated or at ease with algebraic abstractions—been capable of such an extraordinary undertaking?

Tartaglia’s opinion of Fior’s intellectual capabilities—he did not possess the science but only great experience—is consistent with that of Matthäus Schwarz, the German accountant who had taken lessons from Fior. Once established that Fior lacked the education and fertile mind required to find the formula on his own, and assuming that he already knew it when he threw down the gauntlet to challenge Tartaglia, under what circumstances did he acquire this knowledge? And, especially, who was the “great mathematician” who had revealed to him the secret thirty years earlier, and who therefore should have been credited with the exceptional discovery? How was it possible for such a breakthrough to remain secret through all this time? Was Fior the only one to benefit from the confidences of the mysterious personage? And why, after his initial hesitation, had Tartaglia taken Fior’s surprising revelation seriously, causing him to put off his “studies, care, and work” to find—or find again—the crucial formula?

Tartaglia was therefore not willing to reveal the solution process he had used to answer Fior’s questions for fear that Messer Zuanne would infer from it the solution formula for third-degree equations of the form x3 + bx = c, which for the moment Niccolo had no intention to give away. As mentioned before, in those days it was the custom among mathematicians to refrain from announcing their results; keeping them secret could help attract students as well as serve as a weapon in public contests. Tartaglia followed the custom, as obviously did the unknown “great mathematician” mentioned by Fior, if he existed at all.