David O. Stewart, a writer of history and historical fiction, will today release his novel exploring the secrets of the Booth Conspiracy, The Lincoln Deception. 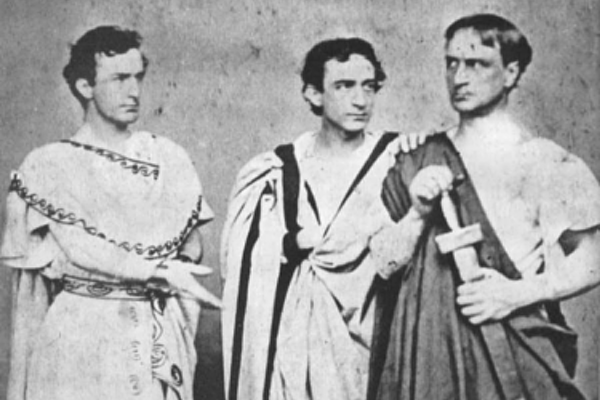 Among the more startling qualities of Abraham Lincoln’s assassin, John Wilkes Booth, was his status in 1865 as a princeling in the royal family of American theater. Perhaps only the Barrymores of the twentieth century have rivaled the Booths for success on the stage and national celebrity.

The Booths performed in major theaters in urban centers, but also crisscrossed the country to small cities and towns. Their performances triggered fan mail that ranged from adoring to vitriolic. The notoriety of the Lincoln assassination has obscured the other Booths in history, but some were as well known as John Wilkes--or even better, at least until he pulled the trigger in the president’s box at Ford’s Theater, 155 years ago this week.

Americans could be passionate about their stars. In 1849, blood flowed in the streets of New York in the bitter rivalry over which of two actors performed a superior Macbeth. When thousands of angry supporters of Edwin Forrest massed outside the theater where his British rival was performing, a melee erupted. Panicky police fired into the crowd. At least twenty died and more than one hundred were injured.

The Booth dynasty, which came to tower over its rivals, began with Junius Booth, who was a titan of the London stage in his early twenties. Known for muscular, vigorous portrayals, his signature role was the king in Shakespeare’s Richard III. In 1821, Junius fled England for rural Maryland with his lover, abandoning his wife and son. Swiftly taking his place at the pinnacle of the American stage, he performed Shakespeare and other classic dramas throughout the country for the next thirty years.

Worn by the grind of constant travel and nearly three thousand performances, Junius sank into alcoholism that sometimes led to violence. To control his erratic behavior on the road, two of his sons – Junius Jr. and Edwin – sometimes journeyed with him. On one occasion, the father of the future assassin threatened in a letter to slit the throat of then-President Andrew Jackson unless Jackson pardoned two men convicted of piracy. Though some have suggested the threat was a tasteless joke, it offered a chilling harbinger of his son’s future crime.

Junius and his lover had ten children, six of whom survived to adulthood. When not off performing, the father’s powerful personality dominated the family home, now preserved as Tudor Hall in Bel Air, Maryland (and occasionally open to visitors). Three sons followed him onto the stage.

The standout among the siblings was Edwin, his father’s successor as the most celebrated American actor of his era. Edwin Booth’s sensitive Hamlet became his signature role, one which suited his slight physique and compelling blend of intensity and control.

John Wilkes, four years younger, proved an energetic if unpredictable performer. Remembering his lines was not a strength, but his onstage gymnastics were always exciting. He once broke a fellow actor’s arm during an onstage duel, stabbed another one in a different show, and even stabbed himself in one performance.

Though John Wilkes toured the nation, he never won the acclaim that Edwin commanded. Some speculate that jealousy of Edwin’s fame may have helped spur John Wilkes to kill Lincoln. The younger brother’s passionate pro-Confederate views were not shared by his siblings. Edmund was a staunch Union supporter, while eldest brother Junius Jr., sister Asia, and brother Joseph (who became a physician) were apolitical.

When Edwin learned of his brother’s crime, he wrote bitterly to their sister: “Think no more of him as your brother; he is dead to us now.” Shaken, Edwin did not perform for the next eight months. He ultimately returned to the stage and acted for many more years, his reputation shadowed by the assassination. Legend holds that for nearly thirty years after Lincoln’s death, Edwin never spoke his brother’s name.

The eldest brother, Junius Jr., learned of the assassination while on tour in Cincinnati. After hiding in his hotel room for two days, Junius Jr. slipped out of town and hurried home to Philadelphia, where he was arrested on suspicion of assisting John Wilkes. He won his release after weeks of imprisonment in the Old Capitol Prison in Washington and soon forsook the stage in favor of theater management.

Arrested and imprisoned with Junius Jr. was brother-in-law John Sleeper Clarke, a schoolmate of Edwin’s who married sister Asia Booth. Asia was several months pregnant in April 1865, so she escaped arrest after the assassination, though she endured a temporary version of house arrest. Asia later served as the family’s chronicler, publishing a profile of her father and Edwin, and leaving behind a memoir about John Wilkes that was not published until 1938.

In one of the ironies of the Booth family history, it was the in-law, John Sleeper Clarke, who found great success on the English stages that Junius Sr. had fled decades before. Largely known for comic parts, Clarke also was the one whose children followed into the family business. His sons Creston and Wilfred, who were not burdened with the Booth surname, both became successful actors.

A Denver newspaper review of Creston Clarke’s performance of King Lear indulged some timeless snark: “All through five acts of Shakespeare's tragedy he played the king as though under momentary apprehension that someone else was about to play the ace.”

Irony suffuses the three actor-brothers’ last joint performance, a benefit to raise money to erect a statue of Shakespeare in New York’s Central Park (which still stands). Before two thousand people on November 25, 1864, they depicted the assassination of a nation’s leader in Shakespeare’s tragedy, Julius Caesar.

On that night, however, art did not imitate life. John Wilkes, who had already begun to plan the kidnapping of President Lincoln, did not portray the assassin Brutus. Rather, he took on the role of Mark Antony, the Caesar loyalist. Edwin played the assassin Brutus that night, while Junius Jr., the eldest, performed as Caesar.

During the second act of the show, fire alarm bells erupted. A nearby hotel was ablaze, as were eighteen others in the city. All, it turned out, had been torched by Confederate conspirators hoping to strike terror into the commercial capital of the North. The Booths’ performance, however, resumed after a few minutes and was not interrupted again.

Six months later, John Wilkes would be dead, Edwin in seclusion, and Junius Jr. under arrest, all late victims of Confederate ideology.