Getting Medieval on COVID? The Risks of Periodizing Public Health

G. Geltner is professor of history at the University of Amsterdam and Monash University and the author, most recently, of Roads to Health: Infrastructure and Urban Wellbeing in Later Medieval Italy. You can explore his publications on his website: www.guygeltner.net. 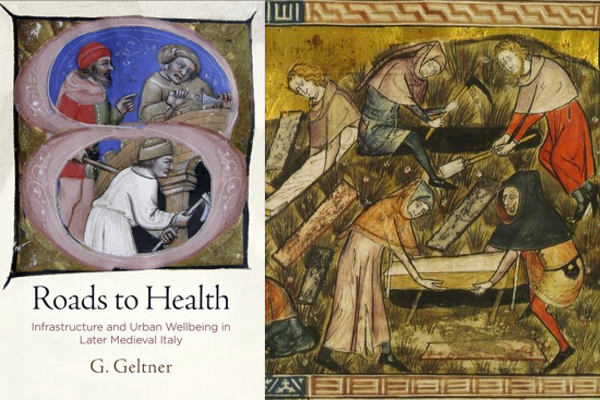 Since the outbreak of COVID-19, many observers have described fighting the pandemic in terms of adopting either “medieval” or “modern” approaches, most recently in a New York Times op-ed. But that dichotomy is a false one, and a dangerous one as well. First, from a historian’s perspective, distinguishing between modern and premodern is a facile way to periodize. Applying a medieval/modern binary to public health, or any other past social practice, implies a normative path towards universal best practices. It also promotes a sense of superiority over earlier societies, on the one hand, and over present-day societies framed as living in the deeper past, on the other. As scholars working across medieval and (post)colonial studies have shown, designating a cultural practice as medieval (or modern) legitimizes hierarchies, inequalities and even violence, rather than providing a nuanced view of the human past. Secondly, and from a preventative-health perspective, mitigating pandemics’ impact hardly demands a choice between non-biomedical (“medieval”) solutions and advanced and rational (“modern”) ones. As recent campaigns against HIV/AIDS and Ebola demonstrate, success requires thinking about how best to combine diagnostic, preventative and curative measures, since different admixtures fit different environmental, administrative and political contexts. Imagining medieval and modern solutions as antithetical blunts this contextual awareness and can put certain communities at greater risk by ignoring their specific needs.

Italy’s current struggle against COVID-19 is a case in point. At the time of writing, nearly one fifth of all reported cases and one third of all confirmed deaths occurred there, especially in the peninsula’s industrialized north (Lombardy, Emilia-Romagna and Veneto), making it so far the most stricken large nation in the world. The historical irony could not be starker, as it was Italy’s inhabitants who led Europe in medical innovation for nearly a millennium, starting with the reception, from the Arabic-speaking world, of the Hippocratic and Galenic medical corpus. Current analyses chalk up Italy’s vulnerability to a combination of a sizable elderly community, multigenerational households, high rates of smoking, polluted cities, and a heavy dose of bad luck. Italy also reacted complacently and belatedly to the virus’ spread, but that was, and remains, hardly unique. Without firm instruction and enforcement, many Italians, like most humans, resisted adapting to a new reality for as long as they could.

But when central and regional governments finally drew the line, they rolled out a set of preventative measures that local cities have been practicing at least since their proliferation in the twelfth century: social distancing, quick burials, closed gates, limited movement, scrupulous market supervision, and rapid communication to keep others abreast. And, while many commentators imagine the second plague pandemic (aka the Black Death, 1346-53) as a trigger for consolidating public health power analogous to modern state action, I have found that these measures spread much earlier in local communities. Rather than the calamity of the Black Death, the normal pressures of urban life taught people that these measures would help them cope with living in hazardous environments.

To be sure, when plague pathogens (Yersinia pestis) entered Europe in the mid-fourteenth century, likely through several Italian ports, they dealt the region a major blow, as they did the Middle East, and likely East Asia and Sub-Saharan Africa. The disease killed at least a third of Europe’s population, even as it spawned a new genre of prophylactic literature and preventative measures such as enclosure of people and goods now known as quarantine (from the Italian quaranta, a period of forty days imposed on vessels arriving from reportedly afflicted areas). The Black Death’s significance in contemporary thinking about contagion reflects the influence of the modern/premodern binary. In particular, the belief that the plague spread in Europe due to hygienic apathy has led many to invoke it as a quintessentially medieval—that is, uncivilized—event, caused or at least exacerbated by the supposed backwardness of its victims.

This line of thinking can similarly constrain addressing contagion today. Consider the emergence of COVID-19, reported to have begun in Wuhan, China in late 2019. New cases soon appeared in South Korea and Iran. This allowed Euro-American observers in January and early February 2020 to compare conditions abroad to the onset of the Black Death and deride other governments’ slow and authoritarian responses (or the threat of applying them in the West) as a return to the Middle Ages. However, as the global scale and scope of the infection became evident, and with Italy taking center stage, Western commentators changed their tone. Although early accounts speculated whether “medieval” or “modern” approaches would serve Italians—and by extension Europeans—best, media discourse soon began juxtaposing “strict” and “liberal” paradigms instead. Perhaps the final blow to any tendentious alignment of certain solutions with particular eras came when China and Cuba headed relief missions to Italy, visibly outperforming efforts by the European Union.

By mid-March, democratically elected governments in developed nations, began imposing unprecedented peace-time restrictions, including tracking infected people’s phones, and suggested an entirely different framing of contagion. Rather than construing pandemics as medieval aberrations, leaders stressed their inevitability: health crises were not borne out of hygienic ignorance and incompetence but were part of the human condition and its fragile socio-political order, which would nowbe maintained by complying with new regulations. A conceptual barrier was thereby removed between the medieval, unhygienic past and the modern, hygienic present. Monty Python bringing out their dead—and almost dead—came to have a different ring to it, as Italian morgues and cemeteries literally ran out of space. Yesterday’s Draconian law became today’s “aggressive measure.” Quarantine, now carefully distinguished from social isolation, lost its pejorative undertones, aided by posts on quarantine hacks from hip social media influencers. Unity and conformity, not innovation and economic viability, became the paramount concern in the war on COVID-19, even among avowed free-marketeers such as Emmanuel Macron of France and Mark Rutteof the Netherlands. Donald Trump, having initially played down the crisis, proudly described comprehensive travel bans, and the widest rollout of quarantine measures in modern history, as a rational way to put (a certain) America First and beat the “Chinese virus”.

Social distancing may still affront present-day sensibilities. Yet by and large the embracing of medieval—or, to be precise, non-biomedical—preventative health measures in Italy and elsewhere reflects public health professionals’ informed and practical approach. It is also a helpful nod at the power of history to educate and inspire new synthetic solutions to new cases of recurrent problems. For millennia, healthcare in Europe, the Middle East and elsewhere was a preventative pursuit, requiring basic hygienic education, clear communication and the efficient policing of infrastructures. Swapping vaccines and ICUs for curfews and quarantines may strike many today as insufficient under the juggernaut of global trade and transportation. The world is also far more urbanized in 2020 than ever in the past, and pandemics distinctly threaten the sort of sociability urban life requires. Yet for most people, coping with COVID-19 successfully will mean following the tried and tested techniques of group and personal hygiene. Broad consensus on the latter among public health experts came as bad news to “supply-side” economic elites, who may well benefit from medievalizing social isolation in order to delegitimize it. But, especially in places like the US, sending un- or poorly insured people back to work, and relying on biomedical measures when health systems for non-elites are utterly unprepared, is tantamount to calling for mass suicide.

Of course, as populations around the world follow low-tech recipes for disease prevention, trained professionals using high-powered computers are already rushing to develop vaccines. Central banks are scrambling to offer financial safety nets so we can go back to consuming what we were used to. And in obvious ways our social stability continues to rely on digital technologies and infrastructures (increasingly private ones) barely conceivable even fifty years ago. Returning to our immediate past may no longer be an option. Yet however we choose to move on, it does not involve either getting medieval or becoming modern. We were never either.

To know more about past prophylactics visit Premodern Healthscaping