Jennifer Redmann is professor of German at Franklin & Marshall College in Lancaster, PA. 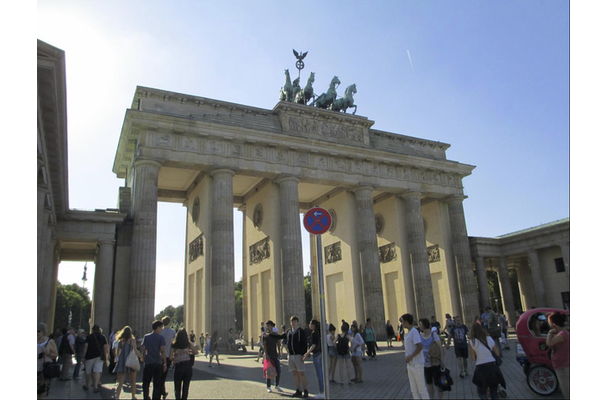 Thirty years ago, East German engineers worked through a winter night to open a crossing at Berlin’s Brandenburg Gate. Since 1961, the city’s most prominent monument stood behind the wall in East Berlin, isolated in the middle of no-man’s land, accessible to no one. Germany, at the time, was divided into democratic (West) and communist (East) states, reflecting  geopolitical realities that followed the 1945 defeat of fascism and the murderous Nazi regime.

On December 22, 1989, however, the gate once again became a crossing point in the center of the city. Helmut Kohl stepped through the portal to become the first West German leader to visit East Berlin. East German Prime Minister Hans Modrow, as well as ecstatically cheering crowds, greeted Kohl in the moment, with the event broadcasted live to tens of millions across both Germanies. It was a time of hope, reunification; an exorcise of the last remnant of an intolerant past that led to the destruction of one of the most socially advanced nations in Europe.

Unfortunately, with growing anti-immigration as well as anti-Semitic sentiments in Germany as well as the U.S., the celebration of this anniversary is shadowed by the specter of that past.  The Brandenburg Gate already boasts a checkered history, and we seem poised at another critical juncture for the landmark, one where the duality of a gate’s utility to divide or connect, dependent on those operating it, seems just as meaningful as ever.

From its very beginnings, the Brandenburg Gate stood at the center of momentous events. When Napoleon’s armies captured Berlin in 1806, they removed from the top of the gate the Quadriga, the statue of a goddess driving a chariot, and carried it off to Paris. Following Napoleon’s defeat in 1814, the statue was returned to Berlin, where it was newly adorned with a Prussian eagle and an Iron Cross in honor of the military victory.

In the centuries that followed, the Brandenburg Gate served as a backdrop to countless historic moments, including the 1987 speech in which Ronald Reagan called on Mikhail Gorbachev to “tear down this wall.” Just two years later, on November 9, 1989, throngs of East Germans approached the Brandenburg Gate and did what had been unthinkable only hours before: they climbed atop the Berlin wall while their neighbors to the west looked on in awe.

Today, the Brandenburg Gate remains Berlin’s most recognizable symbol and provides a stage for all manner of German national celebrations, be it a World Cup victory or, most recently, the 30th anniversary of the fall of the Berlin wall. At the same time, Berlin enjoys an international reputation as a diverse, cosmopolitan, multilingual world capital, a hub of artistic and technical innovation.

The Brandenburg Gate’s position at the very center of Berlin makes it easy to forget that it was once a gateway out of Berlin, an 18th-century exit through the city wall to the town of Brandenburg some 40 miles to the west.

Brandenburg is also the name of the German state surrounding the capital of Berlin, one of the five new states carved out of the former East Germany after unification in 1990. By every measure, the two entities – the city of Berlin and the state of Brandenburg – could not be more different.

While Berlin is young, dynamic, and diverse, Brandenburg and its neighboring states have struggled with economic stagnation and a constant exodus of young people to urban centers. Not surprisingly, the far-right, anti-immigration party Alternative for Germany (AfD) has capitalized on popular resentments to garner significant support in the region. In September 2019, the AfD received 24 percent of the vote in Brandenburg state parliamentary elections, a mere two points behind the left-center Social Democrats and ahead of Angela Merkel’s party, the Christian Democratic Union.

Moreover, the German daily newspaper, Der Tagesspiegel, reported government data that showed over the last few years a steady increase in crimes linked to the hatred of Jews. On October 9, 2019, a far-right extremist in Halle, a city 100 miles southwest of Berlin, attacked a synagogue on Yom Kippur, leaving two dead.

Through its historic association with the surrounding region of Brandenburg, Berlin’s Brandenburg Gate serves as a reminder that in 2019, the German population remains politically and economically divided, even as Germany celebrates three decades as a united entity.

This split is reminiscent of deep-seated divides in American society – between urban and rural populations, the coasts and the heartland, educated “elites” and blue-collar workers, millennials and boomers. These intractable divides contributed to the rise of President Donald Trump, and now threaten to undermine once unshakeable democratic values.

The opening of the Brandenburg Gate that cold night in 1989 is a key moment in the emergence of the new Germany – a leader within Europe and a standard-bearer for political liberalism on the world stage. Three decades later, the opening reminds us that the democratic values so celebrated at the end of the Cold War should never be taken for granted.