Brexit and the End of the United Kingdom 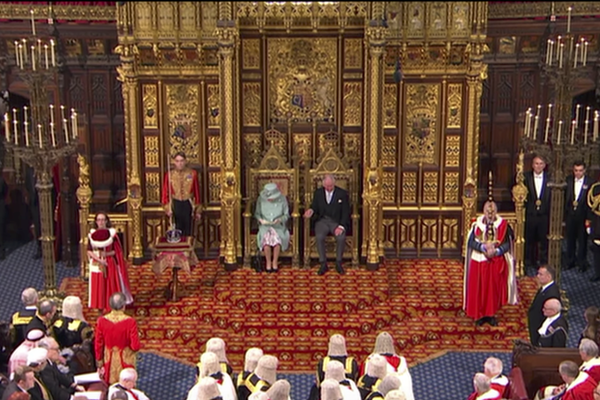 Queen Elizabeth I’s court-astrologer, a wizened and bearded character named John Dee who looked like a stock-wizard and claimed to be able to communicate with “Enochian” angels, invented a new political concept in 1576 after consulting various ancient prophecies and mythological sources. That year Dee wrote a treatise entitled General and Rare Memorials Pertaining to the Perfect Art of Navigation, part of a planned trilogy on the subject of Elizabethan colonization of the Americas. Writing in another pamphlet a year later, Dee’s “great hope was conceived… that her Majesty might, then, have become the Chief Commander, and in manner Imperial Governor of all Christian kings, princes, and states.” That wizard would conjure a novel phrase, displayed in a third pamphlet, written in 1577, and titled The Limits of the British Empire. Embryonic and inchoate as an idea of “Britain” may have been when Dee conceived of it as an idea, it could be argued that 1577 is a credible birth-date for that project. And December 12, 2019 would be an appropriate date to mark when the idea of Britain finally died.

Since the 2016 Brexit referendum, Britain proved no more immune to the same forces of authoritarianism and nascent fascism encouraged by a pernicious xenophobia that is now sweeping the rest of the Western world. With Boris Johnson’s stunning and overwhelming electoral victory on Thursday, and the decisive wins for the Tories across England (though not elsewhere), certain conclusions must be entertained. When Dee conceived of the idea of “Britain,” there was no United Kingdom. Because of Johnson’s ascendancy, it must be considered that it is not only inevitable that there won’t be a United Kingdom again, but that it’s necessary that there shouldn’t be.

Brexit, the career of slimy ghoul Nigel Farage, and now Johnson’s confirmation of continued residence at 10 Downing Street verify that the same storm of revanchism that is transforming America, Russia, Turkey, Hungary, Brazil, and others doesn’t stop at the English Channel. Johnson’s victory, and the failure in messaging from the Labour Party that resulted in their worst showing since 1935, should be disturbing to anyone who fears the rise of the new right around the globe. However, in analyzing what happened this week, there is also some cause for cautious optimism for those of us who support the decolonization movements of peoples struggling for their own autonomy.

In examining an electoral map of Great Britain, there are some observations that should be conclusive beyond the simple fact of the collapse of Jeremy Corbyn’s Labour Party in industrial and working-class districts formerly amenable to their left-wing message. Tory blue dominates in wide-swaths across England, with Labour red in tonier and more cosmopolitan urban areas (not dissimilar to an electoral map in the United States). That encroachment is limited to England, however; for the blue stops near the location of Hadrian’s former wall on the Scottish border. In Scotland (exempting only three districts), both Labour and the Conservatives were routed by the increasingly pro-independence Scottish National Party. Across the Irish Sea and results were similar, as pro-Republican parties took the majority for the first time in Northern Ireland. Sensing the political possibilities, First Minister of Scotland Nicola Sturgeon vowed to hold an independence referendum in a speech the day following the election, intoning that “This isn’t about asking Boris Johnson or any other Westminster politician for permission. This is instead an assertion of the democratic right of the people of Scotland to determine our own future.” Brexit, it must be said, will be an unmitigated social, cultural, and economic disaster with which people in England (the younger generation of which was steadfastly opposed to it) will greatly suffer. Ironically, however, it may be that that referendum and Johnson’s subsequent victory could ensure a silver lining – an independent Scotland and a unified Ireland.

As a forensic pathology report, it may be helpful to analyze what the idea of “Britain” has meant, and what risks and benefits attend its coming demise. In a manner confusing to outsiders, the word has never been a synonym for “England,” even while politicians of Johnson and Farage’s ilk have fundamentally treated it that way. The word was often used as a signifier to fundamentally justify a specifically English colonialism (a brutal process that first began with the countries closest to it). Irish political theorist Benedict Anderson in his classic study Imagined Communities: Reflections on the Origin and Spread of Nationalism supplied a helpful language to explain how nations – disparate groups of people across wide geographic areas who don’t known each other and often have little in common – were able to unify around a common identity. He argues that central to the notion of the “nation-state,” a political innovation that didn’t emerge until after the sectarian violence of the seventeenth-century, was what he called the “imagined community,” that is an invented and constructed sense of identity that was able to fuse together loosely connected but diverse polities. Organizing fictions were helpful in this endeavor, chiefly language, religion, and ethnicity. In the centuries-long process of loose confederations of people being solidified into countries like “France,” “Germany,” and “Italy,” a certain reductionism and flattening has conflated an imagined “ethnicity” with the political reality of the nation. Anderson notes, however, that Great Britain had the “rare distinction of refusing nationality in its naming” (it’s an oversight of the scholar that he doesn’t recognize this is even far truer for the American nationality).

Readers will note that there is no “British” language as there is a “French” or “Italian” one (even if those later examples were accomplished by the elimination and fusing of numerous disparate dialects into an imagined unity). For that matter, there is no “British” ethnicity, excluding the ancient Britons who spoke a Celtic language and were pushed to the Welsh and Cornish peripheries by subsequent waves of Germanic speaking Angles, Saxons, Frisians, and Jutes during the seventh through tenth-centuries. “Britain” as a modern concept can trace itself to men like Dee and his compatriots. If later attempts at building a nation-state, or an imperial extension of the nation-state, relied on ethnic or linguistic categories, than Dee’s initial conception of the British Empire drew from different well-springs. Historian Frances Yates wrote in her seminal The Occult Philosophy of the Elizabethan Age that Dee drew from the ''Arthurian, mythical, and mystical side of the Elizabethan idea of the ‘British Empire.’ '' Inspired by the Tudors’ and his own Welsh background (at the same historical juncture when Elizabeth was oppressing Celtic speaking peoples), Dee ironically conflated “Englishness” with the mythic “Britishness” that designated the original inhabitants of the island, a “basic political fact… draped in the mystique of ‘ancient British monarchy,’ with its Arthurian associations,” as Yates writes. Dee thus envisioned a British Empire that had yet to exist, defined not by “ethnicity” (itself a nebulous concept at the time), but rather as Yates explains as a “purified and reformed religion to be expressed and propagated through a reformed empire… by their Tudors in their capacity as an ancient British line, of supposed Arthurian descent.”

At the time that Dee was writing (and conjuring), England was a northwest backwater, a relatively poor realm on the edge of Europe sharing its island with Scotland. England’s colonial belatedness was a source of embarrassment to men like Dee; while the Spanish had already built a mighty New World civilization that filled the coffers of the Hapsburg Court with Aztec and Incan gold, American colonies were still decades away. With the Union of Crowns in 1603, both England and Scotland gained the same monarch whereby the Scottish King James VI also became James I of England, with the sovereign designating himself “King of Great Britain,” even as Parliament rejected the term as an official designation of the two unified kingdoms. A century later, and Edinburgh’s parliament would be subsumed into London, with the Acts of Union of 1707. Thus “British” moved from the realm of quasi-mythic history and the imagination of writers like Dee into political reality, as the word came to designate subjects in the modern world. Anderson writes that Britain’s status as a non-ethnic national identity “suggests that it is… the precursor of a twenty-first century internationalist order.” The political theorist would be the first to emphasize that that’s not necessarily a good thing, as British imperialism meant first the exploitation and oppression of its closest neighbors, particularly Ireland, and then the exportation of those cruelties throughout the Americas, Africa, Asia, and Oceania.

There have been permutations and changes in what delineated British identity, effected by the collapse of the first British Empire with the American Revolution and then later with decolonization efforts in the twentieth-century that heralded the end of the second British Empire. Throughout its history as a term, “British” might not have necessarily meant “English,” but it didn’t necessarily mean something that wasn’t supremacist. If we conceive of the British Empire, and Britain, as implying certain supranational values, they have always been conflicted ones. Dee may have envisioned a transcendent millennial empire, but by the time those dreams were secularized and enacted, the British Empire promised a certain vision whereby this small European island had the duty and right to govern the majority of the world’s peoples, to extract whatever fortune they saw themselves as being warranted towards, whatever the cruel costs may have been. Such was a perspective exemplified in that apologist for empire Prime Minister Winston Churchill’s A History of the English-Speaking Peoples where he describes that mythic Briton Arthur and “his noble knights, guarding the Sacred Flame of Christianity and the theme of a world order, sustained by valour, physical strength, and good horses and armour… [who] slaughtered innumerable hosts of foul barbarians and set decent folk an example for all time.”

Nations are of course invented things, though some are more invented than others. It’s worth asking what the use may be of a British nationality in this century, especially as it has become abundantly clear with Brexit and the Tory victory that the constituent non-English nations of the United Kingdom don’t particularly care for Westminster. British identity, in theoretically allowing for a cosmopolitan membership of people from a variety of backgrounds, could have always had a more redemptive potential than the foul chauvinism exemplified by the Churchill passage evidences. Several decades ago, with the collapse of the literal concept of the British Empire, and the welcome arrival into Great Britain of post-colonial immigrant populations known as the “Windrush Generation,” there was a half-century of trying to redefine Britishness as something inclusive, expansive, tolerant, and multicultural (despite the simmering presence of the British National Party and politicians like Enoch Powell). Now such a project seems in doubt, and it’s more than fair for Scotland and Northern Ireland (and Wales) to question whether there is a place for them in “British” identity. English voters of a certain age have shown themselves abundantly fine with circumscribing notions of citizenship into a smaller and smaller domain, as they’ve turned to the intoxicating lies of the ascendant global right. Perhaps freed British subjects on the edges of the Atlantic Archipelago would do better with independence, and new definitions.  With better prescience than Dee, Shakespeare would write a few decades later in his play Richard II something which read in 2019 as if prophecy – “England, that was wont to conquer others, /Hath made a shameful conquest of itself.”