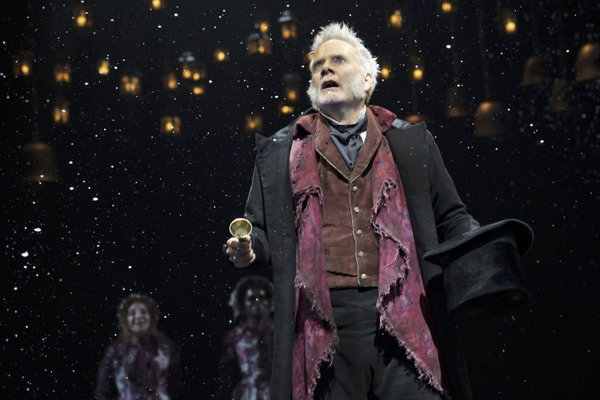 The Christmas season has opened before you even smelled the turkeys from Thanksgiving Day and, thanks to New York’s new and wonderful play A Christmas Carol, it is a joyous season to behold.

This new A Christmas Carol, based on Charles Dickens’ novel, has a different look to it, a different musical score, a different Scrooge and different ghosts. But it is the same heart-warming story of cheap old Ebenezer Scrooge and how three ghosts appear from nowhere and help him change his miserable life. And, of course, it has Tiny Tim in all of his working-class glory.

The fun in this new production at the Lyceum Theater, on W. 45hth Street, that opened last week, starts before the show begins when more than a dozen men and women, dressed in md nineteenth century London clothing, scatter through the audience handing out oranges and bags of cookies to whoever they can find. You didn’t get any? Don’t worry. The folks scramble up on to the stage and toss them out to different spots in the crowd (one 30ish woman was throwing perfect strikes to people way up in the balcony. The New York Yankees should sign her as a pitcher).

Then, solemnly, the Brits all re-appear with bells and play Christmas carols. Then, at long last, cranky old Ebenezer, the Cratchits and the old gang appear on stage and plunge into this delicious chestnut of a play with glee and joy.

The story is simple and just about everybody knows it. Scrooge is an old creep who hates everybody and dismisses Christmas with a big “humbug.” He is mean to his employee, hard-working Bob Cratchit, the father of fragile young, crippled Tiny Tim, who is going to die because mom and dad have no money for doctors.

Scrooge is awakened from his sleep that night by his former partner, Marley, dead these long seven years now. Marley tells him that he will be visited by three ghosts representing Christmas past, Christmas present and, ominously, Christmas future. The ghosts, all women in this play, absolutely terrify Scrooge. They take him around London and remind him that in his youth he was a normal human being. He loved a woman, Belle, worked for a witty and warm man, Fezziwig and had a fine nephew, Fred. Then he began to chase the almighty dollar and gave up his relationships with everybody. Oh, he became very rich. What did he have for all his money?  Well, not much. The ghosts point that out.

Can he be saved on this long and cold Christmas Eve or will he fly into the arms of Satan well below upon his death? He sees himself dead in the play and shivers.

In ghost round three, Scrooge struggles to keep his senses as he finally sees his life as a real heartless, soulless tragedy, and not a trip to the bank.

Playwright Jack Thorne has kept most of the legendary Scrooge story intact, but he has taken out some parts and added others. Example: most productions of A Christmas Carol are heavy on mid nineteenth century sets, large casts and plenty of onstage parties. Thorne keeps it simple and streamlines the story. He works hand in hand with gifted director Matthew Warchus to create a handsome new version of the classic play. A Christmas Carol has got to be the most produced play in the world during the holidays. It seems like everybody presents a version and the different film productions of it made in Hollywood are on television constantly. This new one on Broadway is clearly one of the best, and has all those bags of chocolate chip cookies flying through the air, too (I’ll bet that old Scrooge saw no “humbug” in chocolate chip cookies).

If you like history, you’ll enjoy this play about the 1850s era in England, and the moves, too. Dickens wrote it after observing numerous incidents of discrimination and persecutions against poor people in London and studied the lives of children who persevered in the numerous workhouses of the day. A Christmas Carol is Christmas for the lower classes, but, really, Christmas for everybody.

Much of the success of the play must be attributed to the sterling performance of Campbell Scott as Scrooge. He is happy and sad and joyful and miserable. He had a forlorn movement to his step in much of the play, but a bouncy one at the end. Most importantly, he plays Scrooge as a 60ish man and not the very old grouch seen in most productions of the play. He is young enough to be saved, and young enough to save himself. Scott s just wonderful.

Director Warchus, who does a fine job recreating 1850s London, gets other fine performances from Andrea Martin and Lachanze as the ghosts, Dashiell Eaves as Bob Cratchit, Brandon Gill as nephew Fred, Evan Harrington as Fezziwig, Sarah Hunt as Belle, Dan Piering as young Ebenezer and Sebastian Ortiz as lovable little Tiny Tim.

PRODUCTION: The play is produced by the Old Vic Theater, in London. Sets and Costumes: Rob Howell, Lighting: Hugh Vanstone, Sound:  Simon Baker. The play is directed by Matthew Warchus. It runs through January 2, 2020.