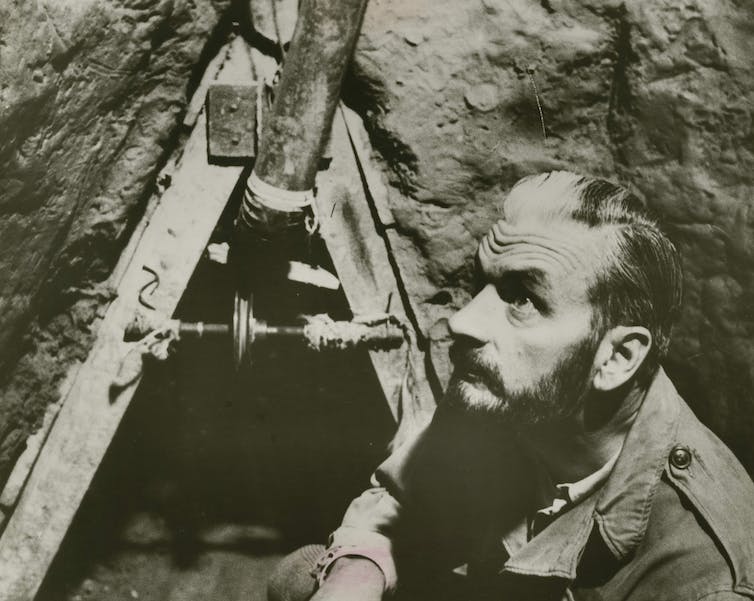 When the Berlin Wall was completed in August 1961, East German residents immediately tried to figure out ways to circumvent the barrier and escape into West Berlin.

By the following summer, NBC and CBS were at work on two separate, secret documentaries on tunnels being dug under the Berlin Wall.

The tunnel CBS chose was a disaster that resulted in arrests and court trials. NBC’s tunnel ended up being in one of the most decorated documentaries in American television history. And yet, in the fall of 1962, NBC was under tremendous pressure from both sides of the Iron Curtain to scrap its documentary altogether.

You would think that the U.S. government would be thrilled to have a film broadcast to Americans showing the desperation and resolve to escape communist East Germany. After all, when the Berlin Wall fell 30 years ago, images of East Berliners streaming across the border were broadcast around the world in what was cast as a triumph for Western democracies and capitalism.

But in my new book, “Contested Ground: The Tunnel and the Struggle over Television News in Cold War America,” I use declassified government documents to tell the story of how political pressure and naked journalistic competition nearly derailed the NBC documentary before more than a handful of people had seen a single frame of the film.

In the 1960s, Berlin was a flash point in Cold War politics.

By the summer of 1961, up to 30,000 East Germans were escaping to the West each month, mainly through the border in Berlin. Soviet Premier Nikita Khrushchev agreed to let East Germany close the city’s border, first through stationing troops and installing barbed wire, and then through the construction of the Berlin Wall.

Even after the completion of the wall, some East Germans, desperate to be reunited with friends and family in the West, sought ways to get to the other side.

In May 1962, NBC producer Reuven Frank and reporter Piers Anderton struck a secret deal with a group of West Berlin college students who were building an elaborate escape tunnel under the wall to help their relatives and classmates who were stuck in East Berlin. NBC paid the diggers $7,500 for exclusive filming access. The students would receive another $5,000 if the tunnel escape plan was a success. 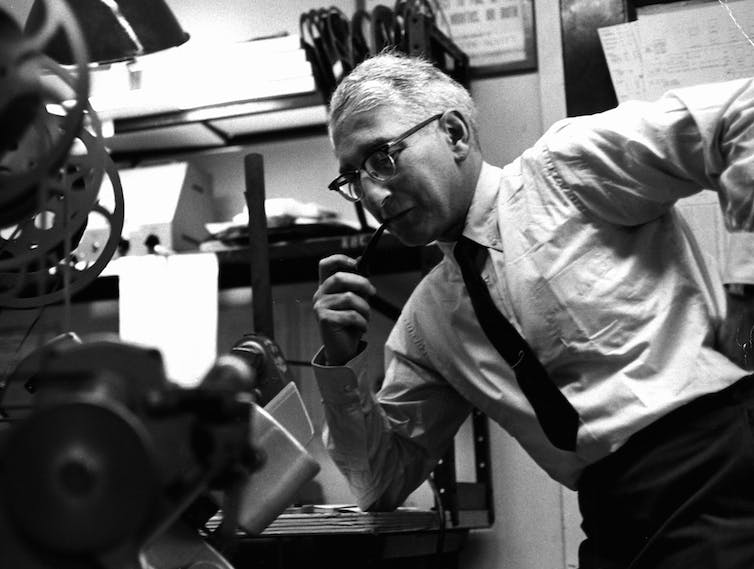 In late July, CBS Berlin reporter Daniel Schorr found a separate, almost completed tunnel project and paid the organizers $1,250 to film the escape. Schorr wanted to run a documentary on the one-year anniversary of the wall’s completion: Aug. 13.

But unlike NBC’s project, CBS’ chosen tunnel wasn’t a secret. West German police and American intelligence members knew of it – and of CBS’ involvement. When Secretary of State Dean Rusk caught wind of the plan, he pressured CBS to get Schorr out of the city in case the East Germans also knew about the tunnel.

Under protest, Schorr left Berlin. Rusk’s instincts were correct. When the diggers broke through just beyond the wall in East Berlin, police were waiting to arrest several of those involved.

One month later, the NBC tunnel, dug underneath the Bernauer Strasse neighborhood, broke through in a basement in East Berlin. At least 29 people escaped in the most successful tunnel project escape to date.

No longer a secret

While the escape was reported in American newspapers, NBC’s involvement stayed a secret until early October 1962, when Time magazine revealed NBC’s payment to the diggers, calling the arrangement “chicanery.” Other print journalists piled on, insinuating that the payment had made NBC part of the story and that the network had relinquished its role as objective reporters.

Nonetheless, NBC announced it would run the 90-minute documentary, titled “The Tunnel,” on Oct. 31, 1962. Frank argued that since the tunnel was already under way when the payment was made, NBC was merely covering the effort. 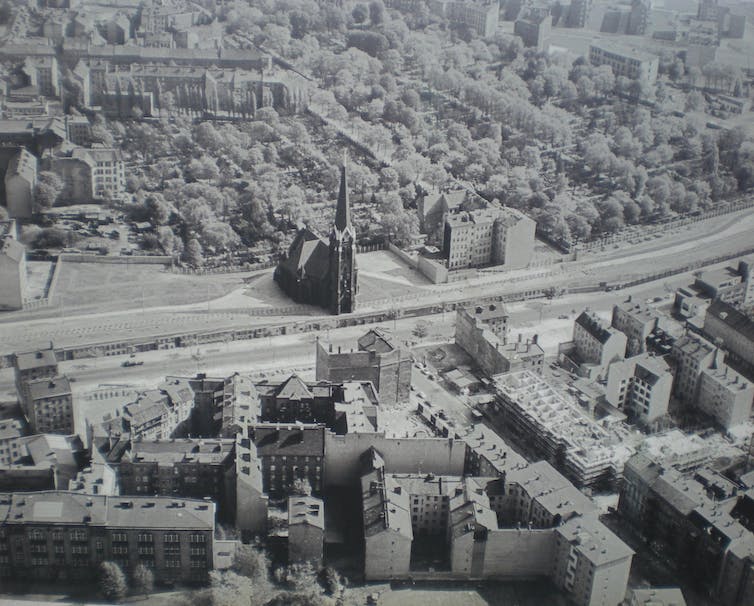 An aerial view of the wall in Bernauer Strasse, where the tunnel featured in NBC’s documentary was built. Wikimedia Commons

Not surprisingly, officials in East Germany urged NBC to cancel the documentary. But West German and West Berlin officials also objected to the project, partly because they were worried people identified in the documentary could be endangered.

Both CBS and the State Department released statements that implied CBS had followed government directives, painting NBC as reckless in its pursuit of its tunnel project. Neither CBS nor the government revealed that the network’s tunnel had been compromised or that it had also paid for access to a tunnel.

On Oct. 22 of that year, New York Times television columnist Jack Gould blasted NBC as “adventurous laymen” stumbling into dangerous Cold War issues they weren’t equipped to handle. He called the payment “distasteful commercialism,” ignoring the reality that payment for images was not uncommon in journalism. Life magazine, for example, was paying NASA astronauts about $25,000 apiece for exclusive access to their personal lives.

That same night, President John F. Kennedy went on national television to announce the Soviet Union was building missile bases in Cuba. NBC quietly postponed “The Tunnel” while the nation nervously waited to see how the Cuban Missile Crisis would play out.

Behind the scenes, NBC President Robert Kintner got involved. He sent a company attorney to West Berlin to reassure government officials that the documentary would only show faces of people who had agreed to be filmed. NBC also convinced West German officials that the project would draw more attention to the Berlin Wall, which was still a sore point in West Berlin.

After the Soviet Union backed down and agreed to remove the missiles from Cuba, Kintner wrote a private letter to Secretary of State Rusk seeking his approval of – or at least to remove his objections to – the network’s documentary. Rusk replied to Kintner that he still opposed NBC’s involvement in the escape project, but that it was the company’s decision whether or not to run the program.

On Monday, Dec. 10, 1962, NBC broadcast “The Tunnel” and 13.5 million people tuned in that night – a rare feat for a documentary on American television.

The real reasons behind NBC’s shaming

The lingering question, though, is why NBC came under such intense criticism for a project that shows the risks people were willing to take to escape communism.

The declassified government documents reveal public and private versions of the controversy.

American newspapers mostly chastised NBC for the payment to the diggers. The State Department scolded NBC for getting involved in a delicate Cold War issue, especially since East Germans considered tunnels under the Berlin Wall as attacks on the border.

Private communications paint a much more complicated picture. First, the State Department didn’t know about the tunnel – or NBC’S involvement – until the media reported on it, leading to some embarrassing cables between Washington and Berlin.

CBS, instead of admitting that NBC had simply found a better tunnel project, complained to the State Department that NBC shouldn’t benefit after CBS backed out of its documentary at the government’s behest. Part of the State Department’s public shaming of NBC seemed to partly stem from a desire to appease CBS.

But the State Department’s behind-the-scenes pressure on both networks shows the extent to which the government expected journalists to cooperate with them on sensitive Cold War issues. Some of the cables cast the reporters as misbehaving employees instead of independent journalists.

Finally, the print press played up the payment ethics angle because it viewed television as a growing threat. Newspaper and magazine journalists were watching their power and influence being challenged by this newer medium, so they took the opportunity to question the professionalism of television journalists, an approach that was first used against radio news earlier in the century.

It was a tide they couldn’t stop: The next year, a poll showed that television news had, for the first time, surpassed newspapers as the most popular and most trusted news format in the United States. “The Tunnel” was honored with three Emmy Awards, including Program of the Year.

In a final vindication for NBC, the United States Information Agency ended up buying 100 copies of “The Tunnel” to show around the world as an example of the benefits of democracy over communism.