Americans Were Too Stodgy for Art Nouveau

Diana Muir Appelbaum is the author of Reflections in Bullough’s Pond; Economy and Ecosystem in New England. She is currently working a book project with the tentative title Nationhood: The Foundation of Democracy. 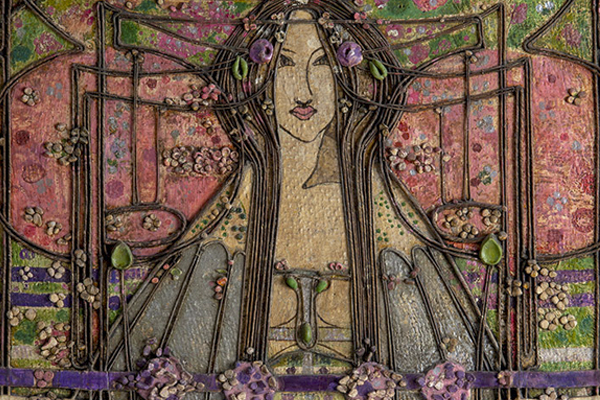 Art nouveau was the modern art movement that America almost entirely missed.  Not only is it absent from our streets, it is largely missing from our museums, a void that a traveling exhibit, Designing the New: Charles Rennie Mackintosh and the Glasgow Style, now at the Walters Museum in Baltimore, is seeking to repair.  Nevertheless, a traveling exhibit and the fact that we had Louis Comfort Tiffany is small consolation when set beside the gloriously curved and tiled art nouveau buildings that sprouted like exotic flowers in the streets of Vienna, Brussels, Glasgow, and Darmstadt, cultivated by the European architects of the Gay Nineties. Americans who wanted something other than classical styles for their late nineteenth-century buildings chose Romanesque Revival for public buildings, and Queen Anne, or Arts and Crafts Movement-influenced Craftsman, Shingle, or Stick styles for homes.  As I said, we were a stodgy people.

Art nouveau did not flourish everywhere; it bloomed in Buenos Aires but not in London, Chicago, San Francisco or Montreal.  It blossomed in wealthy, industrial Glasgow, but not in similarly wealthy, industrial Manchester for reasons that seem rooted in the serendipity of individual genius: the genius of Charles Rennie Mackintosh, Margaret Macdonald Mackintosh (who married Charles), Margaret’s sister Francis Macdonald, Francis’s husband, Herbert MacNair, and the dozen or so others who were part of the Glasgow School, which flourished until art nouveau went out of fashion as the First World War began. Americans can now have a glimpse of the style without crossing the Atlantic in the traveling exhibit that opened at the Walters in October and will go to Nashville, Chicago and the new Museum of the American Arts and Crafts Movement scheduled to open this winter in St. Petersburg, Florida.

The Arts and Crafts movement flourished in the same decades as art nouveau, but it sold better in America.  Arts and Crafts was deeply reactionary, a reaction against industrialization and mass production that sought to recover the beauty and authenticity of the past with hand-crafted objects inspired by Europe’s medieval and folk art that tended toward clunky.  The contrast with the Glasgow School and other art nouveau movements could not have been greater.  The nouveau artists also revisited the motifs and forms of folk, Celtic, Gothic, and Japanese art, but used them to create a modernist movement, a new art for the cutting-edge patrons of the fin de siecle.  The sinuously botanical nouveau designs and buildings in which the curves of women and flowers intertwine was shockingly, radically modern.

Americans and Brits weren’t up for art that was nouveau; they were enraptured by Arts and Crafts, building mansions and neighborhoods of charmingly retro houses and filling them with hand-crafted evocations of the medieval and peasant world.  Today you can buy an Arts and Crafts home in almost any of the older American cities or Victorian resort towns, but we have nothing to compare with the art nouveau homes and apartments buildings that enthrall visitors to Paris and Prague. No American house can be put in a category with Victor Horta’s Tassel House in Brussels, the interior of Munich’s Villa Stuck, the Vienna Secession building, or the entrances that Hector Guimard created for the Paris Metro (although France kindly condescended to give a Guimard Metro entrance to Montreal and another to the National Gallery in Washington).  We did have Laurelton Hall, the home Louis Comfort Tiffany built for himself on Long Island.  It was torn down after a fire struck the abandoned mansion, but bits and pieces of it can be seen at the Morse Museum in Winter Park, Florida and the Metropolitan Museum in New York.  Tiffany notwithstanding, we are left with the fact that our forebears were too stodgy for the first great modern architectural movement.

The Walters is offering Americans a chance to redeem our reputation for rejecting the new (or at least the nouveau) by giving us the opportunity to see the art movement our great-great-grandparents shunned.  It is only a glimpse; no whole Rennie Mackintosh room has been sent across the Atlantic.  To see one you need to fly to Scotland, to Glasgow where there are several, or to Dundee, where the Oak Room from Glasgow’s Ingram Street Tearoom has been installed at the Victoria & Albert’s dazzling new northernmost outpost.  What the traveling exhibition now at the Walters offers is more of a tasting menu: Margaret Macdonald Mackintosh’s show-stopping May Queen mixed-media mural, splendidly styled bookbindings, and images of Renne Mackintosh buildings.

Mackintosh buildings are a marvel.  A contemporary of Frank Lloyd Wright, with whom he is often compared, Mackintosh, like Wright, started on the bottom rung of an architecture firm, cautiously introducing innovative design elements to commissions on which he worked.  His career began to take off in the 1890s when he met Kate Cranston: female entrepreneur. Miss Cranston, as she chose to be known, made a fortune running tearooms in Glasgow, dining establishments where respectable Victorian ladies might meet friends and enjoy a meal in a public space without male escort and without marking themselves as the sort of loose women who dined in public establishments. The freedom to drink a cup of tea with a female friend in a public space was a tiny step forward in women’s liberation.  Miss Cranston continued to expand her tearoom empire after she married in 1892, but the partnership for which she is remembered is the one between Miss Cranston’s Tearooms and Charles Rennie and Margaret Macdonald Mackintosh.  It began when Rennie Mackintosh designed the wall murals for her Buchanan Street Tearooms in 1896.  Charles and Margaret were soon designing whole rooms, and then filling entire buildings with elegantly designed public dining and entertainment rooms for Miss Cranston’s hospitality empire.  They also designed the interior of Cranston’s Glasgow home, “Hous’hill.”

The exhibition devotes a good deal of space to videos of Rennie Mackintosh buildings shot from drones.  While these enable visitors to see architectural details ordinarily visible only to pigeons, they fail to offer museum-goers a sense of why these buildings excite people, something that good architectural photography can do.  Mackintosh, like Wright, is known for creating entire buildings, down to the furniture and decoration of the interior.  But, for better and worse, Mackintosh lacked Wright’s boldness in non-artistic matters.  Mackintosh was not notorious for lying, cheating on employers, exploiting employees, or abandoning wives and children. He was not a serial creator of scandals.  Mackintosh’s designs were as boldly innovative as Wright’s, but he did not have what it would have taken to push his career beyond the small number of patrons willing to commission him in conservative Glasgow.  But, oh, the beauty of those Rennie Mackintosh interiors.

The opening gallery of the exhibit at the Walters is a model of exhibition design. You are immediately faced with an elegant Rennie Mackintosh chair, taller than I am and delicately slender, set on a pedestal in a small space with text and images outlining the careers of the Glasgow School.  Past the chair, at the far end of a long gallery, you see a wall of Glasgow School posters, elegantly elongated female figures that embody the art nouveau moment.  Between the chair and the posters, visitors are given the context within which to understand the Glasgow School, influenced by the art of China, Japan, Persia and the Ottoman lands, but a fundamentally European movement that represented a radical break with the conventions of Victorian design.  Unfortunately, the rooms that follow fail to convey a sense of why people were—and are—excited by Rennie Mackintosh.  And here the curators have my sympathy.

Rennie Mackintosh did not design glorious stand-alone objects like a Tiffany lamp or Lalique dragonfly brooch—he designed spaces.  A Mackintosh chair needs its room around it, because it is the totality of the rooms, the impact of the whole that makes you fall in love.

I am an American, and for that and other reasons I have seen many, many Frank Lloyd Wright buildings.  And my thoughts on exploring one always run along the same track.  Initially delighted at the forms, the materials, the patterns, light, and perfection, sooner or later I begin to think, “How very beautiful. How awkward. I can’t imagine living here.”  The Guggenheim, a gallery built for the display of art, is an exceedingly difficult space in which to display art.  It has, for this reason, not been widely replicated. Fallingwater, Wright’s masterpiece in the Allegheny foothills of Pennsylvania, is beautiful, and damp, and inconveniently laid out, and chilly. The perfect dining room in Chicago’s perfect Robie House seats six people, exactly six people.  It would be impossible for the owners to invite three or eight people to dinner, inconceivable that the owners should give birth to a fifth child.

A number of Frank Lloyd Wright houses now hire out as short-stay rentals, about the amount of time that someone might enjoy living in one. But when I stood in the light-filled living room of Rennie Mackintosh’s Hill House in a Glasgow suburb on a grey morning in a light drizzle, I thought: Imagine how wonderful it would be to be able to sit here, in this luminous and comfortable and exquisitely beautiful room, every day for a lifetime.

Designing the New: Charles Rennie Mackintosh and the Glasgow Style is a touring exhibition co-organized by Glasgow Museums and the American Federation of Arts. The exhibition comprises works from the collections of Glasgow City Council (Museums and Collections), with loans from Scottish collections and private lenders. Support for the US national tour is provided by the Dr. Lee MacCormick Edwards Charitable Foundation.